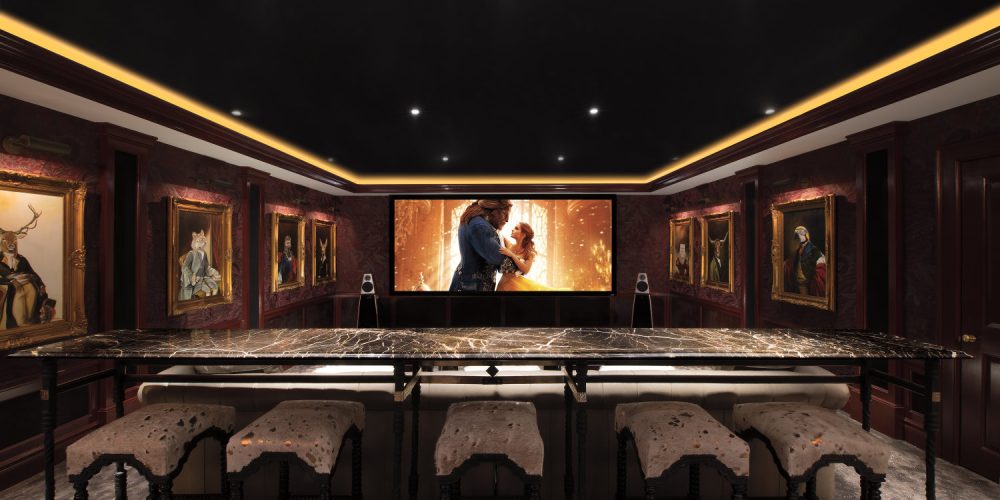 Looking to finish a basement with a dedicated theater room a few years after initial home construction and tech systems installation, the owner hired the Erskine Group to draft and design the project. Union Place, which had installed a Control4-based system in the rest of the house, worked with the Erskine plans to pull together this phenomenal room.

“The design was modern and minimalist with the color palette chosen to minimize any bright reflective surfaces, hence the gray and black theme. They also factored in the Triad speakers for performance and value,” says Union Place’s Brian Duggan of the resulting 9.4.4-channel Dolby Atmos configuration.

Duggan notes the Erskine acoustic requirements behind the stretch fabric system were rigorous and included: sound isolation clips, hat channel, two layers of 5/8-inch drywall with Green Glue between, 50-year caulk to the bottom of the base plates, acoustic matting, 6-mil plastic lining the seating platform and stage, and all cavities filled with sand. Plus, the HVAC system was reworked and the projector enclosed to further isolate noise.

Beyond that, a major challenge was the room’s location. “The theater is the first thing you enter when you come downstairs. The hidden acoustic doors allow you to enter the theater and exit the rear to access the exercise room, guest bedroom, bathroom and snack bar,” Duggan says. “A window was removed in the process that would have been in the theater.”

Not to be outdone by the audio, the video features a 133-inch Da-Lite screen and Epson projection, calibrated by ISF’s Dave Harper.

Who says home theaters have to look like futuristic sci-fi or sports-themed man caves? First, a winding stone-lined stairway leads down past a wine cellar to the basement theater befitting this estate in the bucolic vineyards of upstate New York. Once in the 960-square-foot room, guests find a fairytale-like setting full of whimsical animal portraits in gilded frames against opulent wallpaper, anchored by the pewter carpeting that twinkles with metallic silver threads. 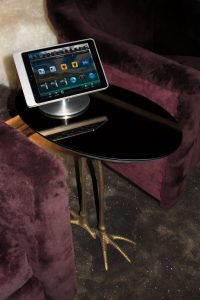 “Surprisingly, as technology integrators, the biggest challenge we encountered was not with the technology, but with the aesthetics. Rather than wrapping the walls in stretch fabric as is typical in many theaters, the interior designer specified wallpaper, so we had to come up with an innovative solution that would satisfy the designer’s vision while meeting the acoustical needs of the space,” relates Osbee marketing director Karen Rusch.

Osbee proposed perforating the wallpaper — microscopic enough to maintain the integrity of the design, but open enough to allow sound to flow unimpeded. Several rounds of testing achieved the right balance, Rusch explains, and Osbee then hung the wallpaper on specially fabricated, perforated wallboards incorporated with the absorbers and diffusers of a Kinetics Noise Control system.

Transporting family and guests into the world of movie fantasy, a Digital Projection Titan projector fitted with TheaterScope anamorphic lens delivers the astounding video, while a Meridian speaker system doles out the awesome audio.