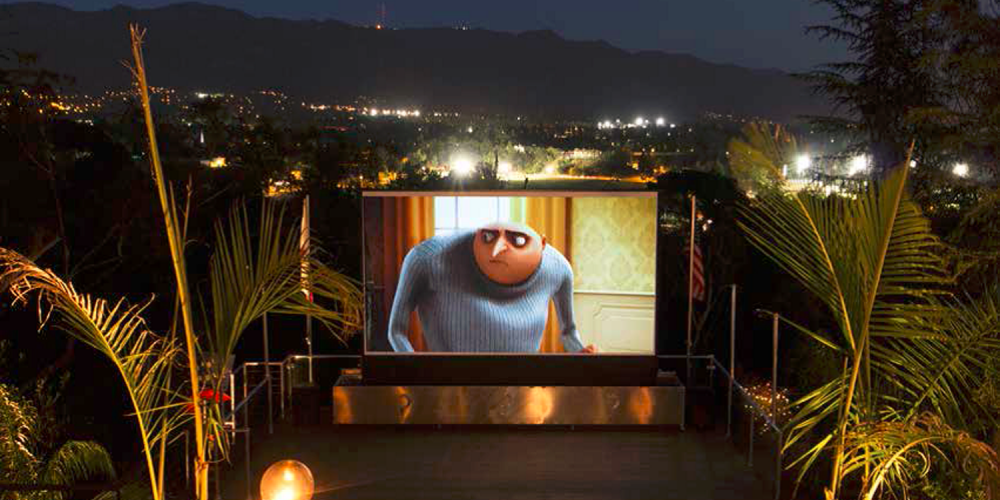 Each year the editorial staff at Electronic House reviews hundreds of submissions to its Home of the Year contest. The entries submitted by home systems installers represent some of the smartest, most innovative home tech projects on the planet. Here you’ll see our picks for the best outdoor entertainment space. 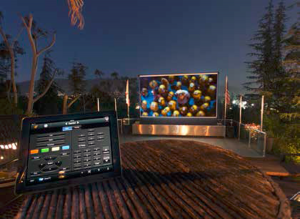 When most homeowners add an entertainment system to an outdoor space, they stick with a modest-size weather-hardy TV and surround-sound system. This type of setup is nothing to sneeze at, but the owner took the idea several steps further by turning an unruly, unusable hillside into an honest-to-goodness amphitheater, complete with big, beefy, professional-grade speakers, a stealthy, motorized 220-inch screen, full-featured, live-performance stage with connections for musical instruments and microphones, and a slew of automated lighting for visual effect. Although the equipment and features of this outdoor entertainment system are full-blown and full of bells-and-whistles, the owners need only grab a smartphone and touch a button to cue the sophisticated A/V components.

The control of this elaborate outdoor entertainment system might be a cinch, but its implementation certainly wasn’t, says Justin Brees from AM House, the Los Angeles, Calif.-based firm hired by the homeowners to design and install the electronic gear during the drastic renovation of their backyard. “The entire hillside had to be backfilled, which took 18 months, in order to create enough space for the theater gear and for the hundreds of people the homeowners planned to host during charity events and special occasions.” Several tiers would be carved into the backyard, creating the look and feel of an actual amphitheater. Using this landscape design as a template, AM House configured a system that would also perform on par with that of a commercial amphitheater, which among other tasks required carrying a 1,200-pound-screen from the delivery truck parked in the driveway at the front of the house to the custom-built stage at the rear of the house. 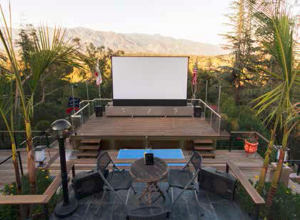 The 20 Niles Audio speakers that pepper the grounds were positioned to blanket the entire yard with even, dynamic audio, be it dialogue from a movie soundtrack, tunes from musical instruments, oral presentations from a microphone, or music from a rack of components located inside the house. When a live performance has been planned, the homeowners can roll out four additional Yamaha DBR12 speakers from underneath the stage, plug them into the system, and use a professional 10-channel Mackie mixing board to tweak the volume, tone, and dynamics of the various audio signals feeding into them– similar how it’s done at a commercial venue.

But no matter what’s playing on the stage—a movie, music, or a live performance—the audio can be directed to every speaker outside, as well as to speakers inside the house, or the owners can choose to have the audio play through only certain groups of speakers. “For example, they could choose to broadcast audio from a movie on only the speakers near the screen while the speakers around the swimming pool and gardens remain silent, or even play music from a different audio component,” Brees says. As yet another option, the owners and friends can don a Sony Walkman (20 sets are available) to listen to the movie audio without having to use the speakers. AM House installed FM antennas to direct the audio wirelessly to the portable, wearable players. “It’s a good way to hear a movie without bothering anyone else who may want to enjoy some peace and quiet,” Brees says.

The homeowners are able to select and direct music to as many as six different outdoor listening zones via an Elan g! app that was installed by AM House onto the owners’ smartphones and tablets. The same app can be used to operate a 3,600 lumen Optoma video projector, a Vutec motorized projection screen, dozens of lights, and a Jandy swimming pool and spa system. AM House designed the g! interface to streamline the process of preparing the backyard for parties, neighborhood movie nights, and other occasions. The owners need only touch a button to have all of the appropriate gear activate and adjust perfectly for whatever activity has been planned.

Video presentations are particularly impressive, given the enormous size of the screen which stretches nearly 9 feet wide and 16 fee tall, the clarity and brightness of the 3,600 lumens hitting the screen, and the remarkable way in which the screen reveals itself. On command from the Elan g! app, a motorized lift activates and the screen ascends from its waterproof hiding spot beneath the stage, the super-bright projector fires up from its custom-built enclosure 28 feet away from the screen, and exterior lighting, except for a few step lights, fades to black. The owners can choose content from an Apple TV located inside the house or a Samsung Blu-Ray Disc player that shares space with the Optoma projector. The video signals, as well as audio signals, travel to the projector and speakers over avenues of high-speed cabling that was trench into the yard by AM House during the excavation. 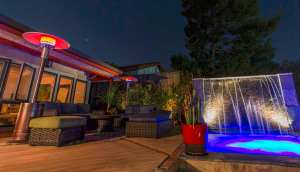 An Extension of A/V Love

This elaborate outdoor entertainment space may be the most tricked-out area of the property, but it’s not that only A/V locale. The extensive backyard makeover took place more than two years after the homeowners had hired AM House to install a whole-house audio and video system into their 2,300-square-foot home. This system is still fully utilized, and provided AM House with a solid foundation on which to expand the system’s reach to the outdoors. It also gives the homeowners access to all the features they have grown to love about their initial Elan system, like the ability to view real-time images from surveillance cameras on any display and hear the doorbell ring through the every speaker. Their familiarity with the Elan g! system bred a comfort level that gave them the confidence to set the bar high for their newly redesigned backyard . “They knew they loved the system, so extending its reach and adding new features seemed only natural,” Brees says.

Dolby Atmos system shakes up the veranda Home renovation moves to the outdoor where 4K video and Dolby Atmos audio team up. 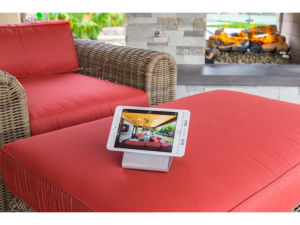 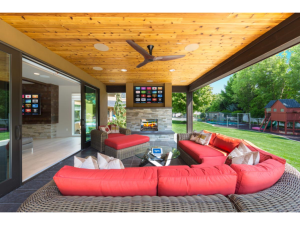 Like many renovation projects, this one started out much smaller than it ended up. The homeowners had originally planned to update the interior of their home, but after discussions with the systems integrators at TYM, of Sandy, Utah, decided to extend their technology to-do list to the veranda. And rather than stick with the original agenda of simply mounting a 55-inch Sony 4K TV to an exterior wall of the house, the crew at TYM suggested bumping things up a notch with the inclusion of a Dolby Atmos system after the homeowner asked for outdoor surround sound.

The homeowners liked the idea, so TYM installed seven Paradigm speakers and two Paradigm subwoofers in the ceiling of the veranda, which are fed by an Onkyo TX-NR3030 A/V receiver. “Great audio is expected in a theater,” says TYM designer Matt Montgomery. “But when the roar of a film’s score and audio envelopes you in an open air veranda, guest are both surprised and thrilled.”

Video to the 4K TV comes courtesy of two Sony Blu-ray players, two Apple TV units, and three DirecTV boxes, all shared with several media setups inside the house. Music from an Autonomic Mirage server is also available to play through the speakers. A Savant control system puts command of the veranda A/V in the in the palm of the homeowners’ hands.

A natural blending of A/V and architecture collaboration between tech and design nets a system that blends in with the natural surroundings. 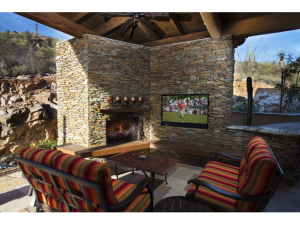 When a home systems integrator is able to work hand-in-hand with a builder and landscape architect some amazing results are bound to result, as is the case with this outdoor space where the A/V equipment blends in beautifully with the surrounding environment. Collaboratively the trio, which included Automation Specialists, Dove Mountain Homes, and Solana Outdoor Living, divided the backyard entertainment area into three distinct zones: a music system throughout, a sitting area underneath a covered patio featuring television viewing, and a pergola. A Crestron HDMI DigitalMedia distribution system directs music from a Sonos system to outdoor-rated Episode speakers.

Other A/V sources, including an Apple TV, Samsung Blu-ray disc player, and cable TV boxes, are fed from the Crestron switcher to a Samsung LED TV, which the integrators from Automation Specialists, of Tucson, Ariz., mounted to an articulating arm that retracts from a niche carved into a stone wall. The niche was created deep enough to tuck away a Wi-Fi access point for keeping the home network strong, a Triad powered subwoofer, and a Crestron infiNET gateway behind the display. A Triad Micro soundbar was fabricated to match the width of the TV. Automation Specialists finished off the impressive installation by providing the homeowners with a waterproof and weather-resistant TV cover to place over the screen during unfavorable conditions.