It doesn’t take much to start racking up a huge assortment of video gear. There’s the Xbox 360 and PS3 gaming consoles, the Blu-ray player and satellite receiver. You may even have a media server and download movies from the Internet. And let’s not forget about any surveillance cameras you might have perched in key watch-out areas around the house. Those count as video sources, too. With so many different types of content from which to choose, it may be, well, difficult to choose.

A new technology recently introduced by Savant means you’ll never have to decide, because you can actually watch up to nine different streams of video at the same time, on the same screen. Naturally, it takes a lot of engineering and processing to divide an ordinary screen into multiple windows, so the SmartView system doesn’t come cheap. One of the first installations of the system, in a 42,000-square-foot mansion near Phoenix, cost approximately $43,000. 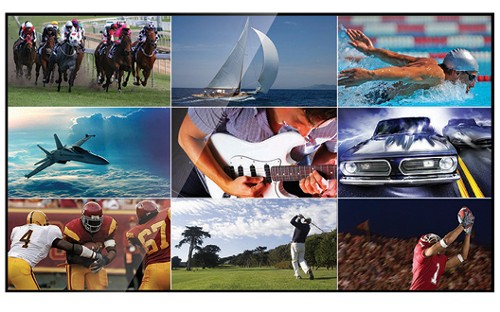 Installed by Insight Home Solutions, Scottsdale, Ariz., the video tiling feature is available on three different displays. This is no static sort of system, either. Using Savant’s TrueControl iPad app, the homeowners can choose the shape and size of each video window, and pick a specific video source for each. On a whim, they can readjust, maybe choosing to view only three sources at a time and making each window larger. For example, one big window could display the ball game, while the others show real-time images captured by the surveillance cameras outside. Common iPad finger gestures like pinching, expanding and swiping are used to alter the layout of the video tiles.