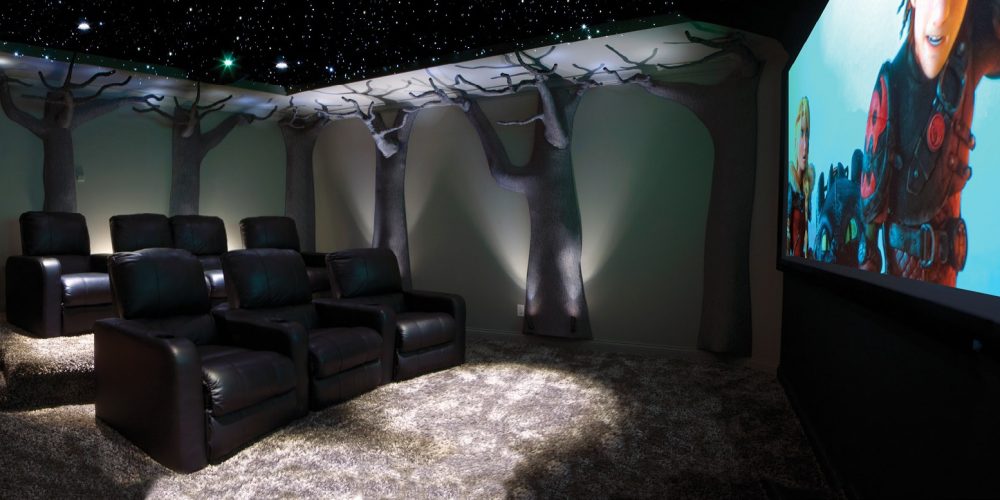 DURING THE OFF-SEASON you might find Indianapolis Colts placekicker Adam Vinatieri donned in hunting gear tracking down his next big score. When he’s not sending the pigskins through goalposts, the avid hunter and outdoorsman likes to get back to nature, adding to his collection of prized game.

Just as many homeowners choose to infuse memorabilia of a favorite movie or hobby into the design of their home theater, Vinatieri wanted to inject his love of nature into the environment of his media space, which would occupy approximately 300 square feet of a new addition to his 10,000-square-foot home in Indiana. The home systems integrators at Tri-Phase Technologies, of Carmel, Ind., and the acoustical engineers at Simplified Acoustics, of Lafayette, Ind., were happy to help him bring his dream of a nature-inspired theater to fruition.

Before any A/V gear could be installed, the room had to be put into tip-top shape, acoustically. Explains Tri-Phase design consultant Rocky Settecasi, “Because the walls and floor of the room are made of concrete, sound projected by home theater speakers would reflect harshly, causing reverberation and echo, which is very distracting audibly to a movie.” The space would therefore need to be “soften” considerably; this meant adding ample acoustical treatments to the walls and ceiling surfaces.

To handle this portion of the job, Tri-Phase recommended the acoustical engineering and design services of Matt Call from Simplified Acoustics. After analyzing the room’s acoustical characteristics, Call suggested a variety of treatments, such as large fabric-covered fiberglass panels for the walls. “Adam wanted something more creative than traditional paneling, though, so after many meetings we decided to shape the panels into something that looked like trees,” Call explains. Each panel was designed and cut meticulously by Call to provide the precise amount of sound absorption required—a task that took 18 months to complete. The size and shape of each branch was critical to the effectiveness of the acoustical design and added a sense of three-dimensional realism to the theater’s nature-inspired theme.

Some movies are shot in a 16:9 widescreen format; others go wider at a 2.35:1 aspect ratio. So, what shape screen makes the most sense? For Adam Vinatieri’s theater, the home systems integrators at Tri-Phase Technologies, of Carmel, Ind., went with the wider 2.35:1 size. Narrower 16:9 content can fit onto the screen, and thanks to the “memory zoom” feature that’s built into the Panasonic PT-AE8000 video projector, there are no black bars on the top or bottom of the image. Instead, the zoom feature automatically activates to fill up the entire height of the screen. Another plus: The projector can handle 3D content, a specific request of the homeowner.

On the ceiling, a fabric fiber-optic starfield, custom-designed and built by Call, was installed. Again, in an attempt to portray a sense of 3D in the room design, the small LED lights aren’t embedded in the fabric, as is typical, but dangle by varying lengths of thin fiber cabling from the ceiling surface. These lights, as well as the A/V system that was installed by Tri-Phase, are controlled from an RTI handheld remote control that Vinatieri had used to control his media system at his previous home. With a few minor tweaks, and the addition of an RTI XP-series processor by Tri-Phase (necessary to translate the RF signals from the remote into infrared signals that the A/V equipment can understand), the remote was ready to handle Vinatieri’s new home theater system. One touch of an icon on the remote’s built-in touchscreen prepares the room for movie viewing, which comes courtesy of a Panasonic video projector and a 130-inch Stewart Filmscreen screen. In addition to revving up the projector, the remote also commands the Lutron Grafik Eye system to dim the room lights, and the Integra surround-sound receiver to activate. From there, the remote’s touchscreen presents three different viewing options from which to choose: media server, high-def cable box, or Blu-ray Disc player.

No matter what appears on the 130-inch screen, the sound is always on par, delivered by a 7.1 Klipsch THX speaker/Velodyne subwoofer arrangement, all of which are hidden either behind the acoustically transparent screen or recessed into the ceiling. As the acoustical 3D trees do their magic by enhancing the audio supplied by the speakers, Vinatieri can relax and unwind in a “natural” environment. EH

Check out a video of some of this home’s features.