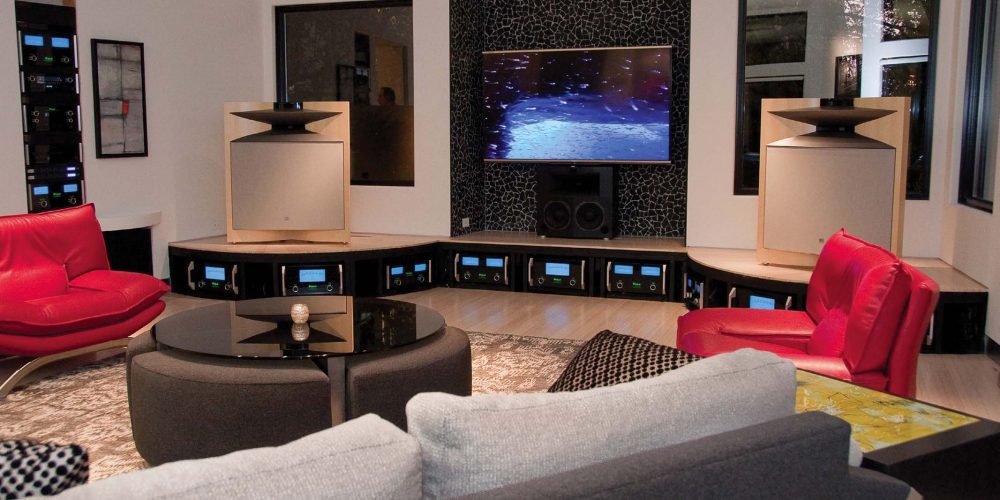 A home theater shouldn’t be boring; nor should it always abide by the book. Of any room in your house, it’s the one place where you should feel free to express your creativity, to unleash your imagination, to create something that’s truly one-of-a-kind. Sometimes it’s the stumbling blocks you encounter while installing a certain piece of A/V gear that inspires innovation; other times you simply strike on a really interesting idea that’s a bold departure from the standard theater design. Whatever the impetus, whatever the reasons, the owners of these five theaters have, with the help of a professional home theater designer, created some truly unique, and a few completely unconventional home entertainment spaces.

Big bedroom mirrors are helpful when checking out your attire before bolting out of the house for work or a social event. In this master suite, it’s also a place to check out the news, weather forecast or even a 2-hour movie. Manufactured by Seura, the mirror TV was recommended to the homeowners by South Pasadena, Calif.-based home systems design and installation firm CBA Technology as part of a whole-house automation project. “The owners wanted every TV in the house hidden in some way,” CBA Technology principal Michael Fehmers says. “In some rooms we hid them on motorized lifts inside cabinetry, in other places we used motorized canvas artwork to roll over the display when it wasn’t being used, and in this room we went with the largest Mirror TV model in Seura’s product lineup.” Installed within the structure of the mirror is a 42-inch Samsung LED, whose screen is only visible when the owners use a Savant handheld remote control to turn it on. Video and audio from a variety of different components located in an equipment rack elsewhere in the house are fed to the screen and its companion Sonance stereo speakers (mounted in the ceiling), as well as to all other TVs and speakers. When the 42-incher is turned off, it disappears from sight and the mirror goes back to being a mirror.

Some of the most creative work comes out of the least likely: places. Take this garage multiplex in New Jersey. The owners: wanted a place where they could spend time with their teenage: twins and where the kids could entertain friends apart from: the other living spaces in the home. So they gutted the bulky: space above the garage, dressed it in New York Yankees blue, and the home theater designers at: Electronics Design Group (EDG), Piscataway, N.J., set about designing a multimedia, multiscreen: system that could satisfy the family’s varied entertainment: needs.

Flexibility was a key component of the room. It had to be a: home theater at times, a social networking hotspot at others and a: den to play video games — with room to move around. Sometimes: it’s all those things at once. The 106-inch motorized Da-Lite: projector screen drops from the ceiling when it’s time for movie: night or a Bronx Bombers game and then motors back into its: housing in the molding above the front wall when the projector: turns off. Sitcoms and reality TV fare show on the 52-inch Sharp: LCD TV that’s permanently mounted to the front wall. The 32-: inch Sharp LCD TVs on either side are dedicated for close-up: viewing, serving as oversized game displays, computer monitors or: video chat screens. —Article by EDG

All Their Ducts in a Row

Heating and cooling ducts didn’t stifle the A/V expertise of the design and installation team at Waterloo, Canada-based Neutron Digital Solutions from turning a roughly 15-by-16-foot portion of an unfinished basement into a stellar dedicated home theater. Instead, this necessity served as inspiration for the creation of an interesting architectural feature for the room…and a great hiding spot for a JVC video projector. A 2-foot-wide by 1-foot-high wooden bulkhead was constructed around the ductwork; per Neutron Digital Solutions’ request, the builder left a small niche in the middle into which the projector could be tucked. Placed in its niche, the projector is in the perfect position to throw movies onto a 120-inch Dragonfly screen at the front of the space. The bulkhead, which was extended around the entire perimeter of the room for a symmetrical appearance, also proved helpful in the placement of five Episode HT700 surround-sound speakers. “The locations of the ceiling joists made it impossible to mount the in-ceiling speakers where they ideally needed to go, but the open area within the bulkhead gave us the freedom to align each and every speaker perfectly,” explains Scott Comens, owner of Neutron Digital Solutions. It all just goes to prove that sometimes roadblocks can reveal unexpected benefits when designing a home theater.

In a perfect world, a home theater would be a rectangular shape with a proper measurement of 14×20 feet topped by: a 9-foot ceiling. But there is no perfect world, and few basements: are built from the ground up with ideal home theater proportions: in mind. In this New Jersey project, structural columns interrupted: the space where the theater was to go, so the homeowners adjusted: by building a theater “nook.” It ended up working well with their: plans to isolate the room from the rest of the house to keep noise to: a minimum, but it required acoustical tweaking to tailor the sound: to the space.

Originally, the owner was set on a 103-inch plasma TV for: the wow factor. The professional home theater designers at Electronics Design Group (EDG), Piscataway, N.J., convinced him that a projector would: deliver the big-screen experience he wanted at a price within: his budget. For the amount of money a 103-inch plasma TV: would command, the family could get a DLP projection system,: including a 110-inch screen, pad the room with acoustical: panels and get a secondary 55-inch plasma TV in the rear of: the room to boot — while still having money left over. : —Article by EDG

A big fan of McIntosh A/V components, the owner of this “morning room” theater decided to make the signature blue LEDs on the company’s amps, processors and power conditioners a visual showpiece, along with a Sharp 4K 70-inch TV. Recessed flush along the perimeter of a custom-built stage, the black-and-blue components are situated front and center for everyone to admire. “It was his specific request that we showcase the McIntosh equipment in a unique manner,” says Jeremy Beck, president of home theater design and installation firm Futurian Systems, Southlake, Texas. “It’s a design that’s a huge departure from the ordinary assembly inside an equipment rack.” While adding visual interest to the space, the components also treat the ears to more than 6,000 watts of pure audio output, blasting into the room from high-end JBL Synthesis speakers and subwoofers, all of which Beck and his team tucked into the ceiling.