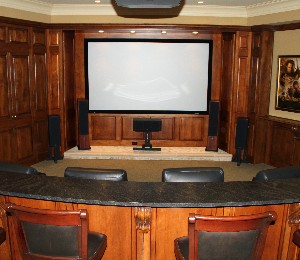 The owners of this Atlanta home theater had a couple of unique challenges, the biggest one being the open-nature of their room. The theater area is adjacent to the home’s main living area and the couple wanted to keep it open to allow guests to easily move between the spaces. Plus, they just like the look of it.

Such an open home theater setup, however, means that both light and sound are not easily contained. Without a back wall theater sound is difficult to manage and ambient light can be distracting. The owners weren’t new to home theater though (they’ve had them in prior homes), so they knew going into this project that they’d have to tackle those issues in order to get the total experience they wanted.

The ambient light control issue turned out to be the easy problem. A combination of blackout shades and curtains blocks out all unwanted exterior light from the windows. Interior light is controlled with a Lutron RadioRA2 lighting control system which is operated by the home’s Savant automation. A “Watch Movie” scene programmed into the system (and accessed via wall-mounted keypads or iPads) turns off the lights for video time.

To get the sound right the homeowners turned to several source books for guidance and utilized the Audyssey audio room correction feature in their Marantz processor. The Audyssey system allowed them to calibrate for the full 8 seats in the room, but the result didn’t give them all the bass they wanted. They then replaced a single Velodyne 15-inch subwoofer with two SVS SB13-Ultra subs to give the room a crisper bass sound with even distribution. After some trial and error, the best placement for the subs put them on opposite sides of the room and at slightly different angles. This spread the sound evenly in the space preventing peaks and dead spots.

While a lot of the work in this room was done by the homeowners themselves, some experts were brought in to help. The cabinet work was done by CellarMaker, which also built the owners’ basement wine cellar, so they knew the kind of quality work the contractor could do.

Every detail of the room design, including the matte (non-reflective) marble for the bar counter, was selected to contribute to the performance of the home theater system. Every picture frame, lighting fixture and cabinet door includes dampeners to ensure that the two SVS subwoofers don’t create unwanted rattle or buzz.

The electronics installation and calibration was done by Digital Interiors of Atlanta. Digital Interiors also installed the Savant and Lutron automation systems and wired the home’s 16 audio zones (including outdoor entertainment areas).

One final feature makes this a truly non-traditional home theater. In the front, in addition to the main left, right and center speakers, there are extra left and right front Aerial speakers. The owner calls this system “9.1 ready” and refers to the extra speakers as left and right wide. They aren’t actually part of the audio system, though they are wired up (just not connected to an amp). The speakers were left over from a prior theater, so rather than keep such nice speakers in the box the owners decided to place them in the room in the hopes that sometime in the future a new audio format with content available that will be able to take advantage of them (the tower speakers are the ones that are currently used).

Check out the slideshow for more views of this home theater system.