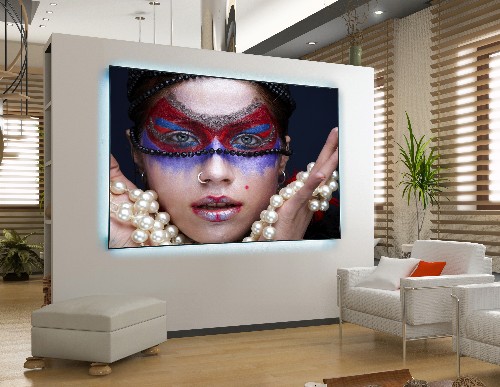 Stewart Filmscreen, one of the leading makers of home theater screens for elite and custom theaters, launched two new products sure to please home theater designers and owners.

The first is the LuminEsse, a rigid front projection screen (not to be confused with StarGlas, Stewart’s rigid rear projection screen material), which features an edgeless design for a more elegant and modern look in home theaters or multipurpose media rooms. The LuminEsse screen creates a floating screen look, more like a thin flat panel TV than a traditional home theater screen.

It features a thin 3/8-inch bezel providing a sleek appearance, even when not being viewed. An optional LED backlighting kit is also available that throws a splash of color on the back wall. When a projector is projecting an image, the multicolored perimeter lighting enriches onscreen content, and when off, it can be used to set the mood of the room.

Stewart says the LuminEsse screen can be configured to use any of the company’s 4K-rated front projection screen materials, including Stewart FireHawk G4, Stewart GrayHawk RS, Stewart Studiotek 130 and more.

An acoustically transparent screen allows the home theater speakers to be placed behind the screen, making them essentially invisible to the viewer/listener, but also helps with the audio imaging as it allows placement of the speakers at ear level, and especially puts the center channel in the center of the screen, making screen action and vocals sound more natural.

What goes into the best home theater screens?