Turn Any HDTV Into a 3D TV - Electronic House ​​ 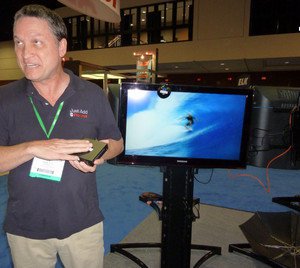 If you’re thinking about trashing your old legacy HDTV sets just to get a 3D picture … think again.

Instead, you might want to check out the 3D Manager from Just Add Power, one of the original developers of HDMI-over-IP. The new solution, introduced at the Electronic House Expo (EHX) last week, turns virtually any HDTV with an HDMI port into a 3D-enabled display.

I interviewed Just Add Power principal Ed Qualls before EHX 2011 and the solution sounded pretty good. As described, the technology could potentially save consumers thousands of dollars, protecting their initial investment and making the integrator look like a star.

But I was skeptical … until I experienced the 3D Manager at the show.

3D for the Whole House

Consumers currently have access to multiple 3D sources including Blu-ray, satellite, PS3, Vudu, cable and others. But most households have only one or two (or zero) 3D-capable displays in the house.

1. Discover Encoder
This pass-through device converts the 3D source content to a 1080p or 720p signal compatible with practically any existing HDTV or projector. Using the RS-232 interface, the custom installer is able to dynamically control various functions such as frequency (60Hz/120Hz), scaling, color processing, noise reduction and EDID response.

2. Synch Nodes with IR Emitters
These pass-through devices, based on Just Add Power’s HDMI-over-IP technology, are needed for each room that wants the benefit of 3D video. However, a standard switcher may be utilized instead. “We have already gathered that the Atlona switches will work for sure,” says Qualls. 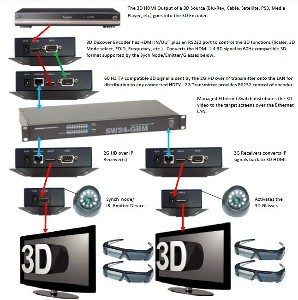 My Impressions of 3D Manager

Not only did the 3D picture look great on some “old fashioned” HDTV sets shown at EHX, but the underlying technology had some nice surprises.

First, Just Add Power demonstrated its solution using the 60Hz frequency. I think 120Hz and 240Hz may have met their match when it comes to 3D.

Personally I found a couple of reasons why 60Hz may be better than the higher rates, starting with adjustment times. My eyes seemed to adjust much faster and more comfortably with the lower range.

Also, overall comfort was much better. 60Hz means breaking the video down to about 30 frames per second for each eye, which is much easier on the eyes.

Finally, the 3D Manager addresses EDID challenges that have previously made it difficult to distribute 3D content to multiple displays.

Normally, once a source sees a 2D display in a single or shared use, the 3D functionality is turned off.

Some companies such as Atlona have overcome this challenge by memorizing or adding custom EDID on the switch side.

JAP’s approach is different. The EDID on the 3D Encoder — which is the first device in the chain to the source – is set to be recognized as a 3D-ready display. This allows full 3D distribution to all HDTVs because each 3D source essentially sees a 3D-ready display before the switching.

And don’t worry about maxing out the network. Even with a consumer-grade router, the system can deliver 3D content to dozens of TVs – scores of them with an enterprise-grade router.

The best news about 3D Manager? You don’t have to worry about investing in 3D-capable TVs that may employ proprietary 3D formats that are not interoperable across TVs, encoders and glasses.

With the 3D Manager, any HDTV with HDMI can be a 3D TV. Integrators and consumers will be happy. Manufacturers … probably not so much.

Just Add Power sells only through the custom installation channel. As such, there is no “retail” price for the 3D Manager and related components.

Having said that, a kit with one encoder, two synch nodes with two IR emitters, and four pairs of 60/120 Hz 3D glasses might sell for less than $5,000 – a bargain for some consumers with existing high-performance projectors and displays.

The product currently is set to ship in June. A few changes to the product are underway, such as less intrusive emitters. Qualls and I discussed a one-gang in-wall model.

The glasses may get a stylish upgrade, as well. Think Oakley. Literally.