One of the most well-known names in luxury home theater design is Theo Kalomirakis. He’s an influential leader in the industry, and his designs take home theater beyond being merely a room with a big screen and lots of speakers, into a place with its own personality, where the homeowners can have a total sensory experience from the moment they cross the threshold.

We spoke to Kalomirakis at Crestron’s Design Showroom in New York City. We asked him about common mistakes, the importance of automation and how he approaches design. 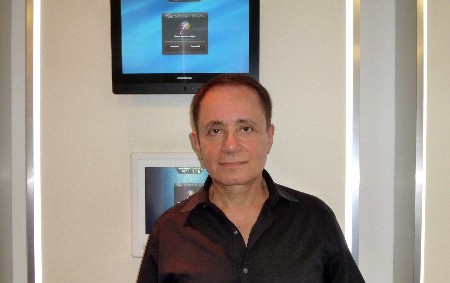 Are there any common mistakes people make when planning or building their home theaters?

It’s become like a little cottage industry for me, talking about the mistakes people do, that started by mistakes I did. You don’t learn unless you make mistakes.

Mistake number 1: You get into a home that a designer is involved, and they have put the seats on cement. This is a no no for sound. If you don’t have carpeting on the floor the bass doesn’t hit you in the heart. Its just like having a violin having it’s cavity filled with cement.

Another mistake is people think that if you put acoustical treatments on the wall, it seals the theater from the rest of the house. These are two different things. Room isolation and room acoustics are two totally different animals. You have to be prepared to do both. These are the technical mistakes that I see people do. I see a lot of architectural mistakes, and I’ve done them in the past, hopefully I don’t do them anymore.

What are some of the unique enhancements that you can bring to a home cinema that clients may not have thought of themselves?

What I think I bring to my clients is to educate them to actually justify the expense. I try to protect them from making mistakes. I want them to be able to live in a room that is heightening the experience without being so aesthetically different from what they have in the rest of the house.

What can automation bring to the experience of home theater?

Everything. Without automation you get a bunch of electronics that don’t work with each other, that don’t communicate. There is nothing more frustrating for a client than having to hit ten remote controls to turn the lights down, open the curtain, start the system. Automation is probably the most vital aspect for enjoying home theater.

In my mind the most unique thing you can do is through lighting design. You can set up the levels of the room so it’s lit up architecturally, not generically. In the theater, lighting has to create drama. Automation allows you to create presets in the lighting that gives the client the ability to see, for example, slight illumination of the speaker grills when you watch a movie, or don’t see them at all, or having the step lights visible. 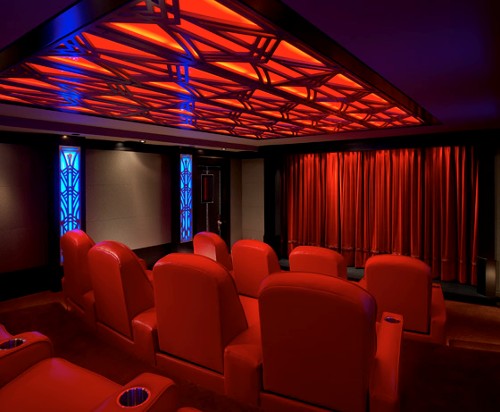 At what point in the consultation does automation customization enter the conversation with a client?

At the end of the project. It’s very important that you separate all the lighting sources in circuits. Column lights on one circuit, step lights on another, curtain lights on another. So you can play with levels, bring certain lights up and down to the client’s wish. I don’t do that by myself. Clients will have different aesthetic preferences, so I sit them down and say, “do you like this light 40 percent down, or 50 percent down,” and have the integrator hit the button and show them.

Have you noticed any trends or shifts in what customers are asking for lately?

There is more and more emphasis on [multipurpose] media rooms and away from [dedicated] home theater, because people are misinformed. Younger people, in the 20s and 30s especially, are used to experiencing media in tablets and iPhones, so for them a dedicated room is not as important. So I see a trend toward not having a home theater in the center of the house. To me that’s a mistake because you have to have both. You have to be able to bring your movies on your tablet to watch on a trip, but you don’t want to watch a movie on a tablet at home. And you don’t want to watch an epic on a 50- or 60-inch TV. You want to be immersed in the experience.

Take a look inside Kalomirakis’ own home theater here.

Talk to their designer. Designers are getting more savvy about home theaters. Talk to a professional. You need to have someone take you by the hand and guide you through the process, show you what’s available and possible in your room.

You Might Also Like:
Arrg, It’s a Pirate Theater for Me
TK Living Launches Decorative Speaker Grills