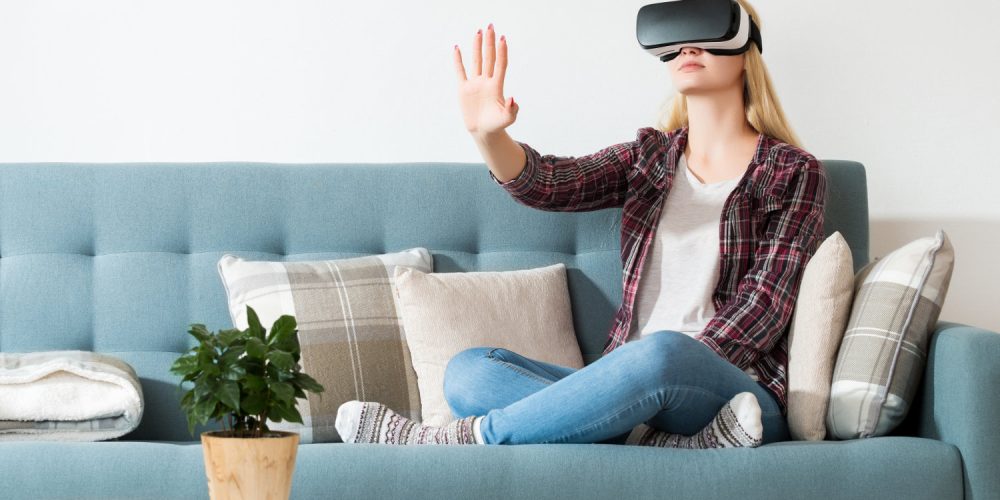 If you’ve seen one of the advanced console games that have come out recently, such as Irrational Games’ BioShock Infinite, you know that they’re evolving into incredibly sophisticated, almost cinematic spectacles that create believable artificial worlds. The biggest limitation has been that they’re confined inside the TV.

All that is about to change, though, as new technologies and products are being developed that will make total-immersion virtual worlds a widely used form of entertainment. And home virtual reality won’t benefit just gamers. It will enable consumers in their homes to be immersed in virtual stores, take part in virtual events and take virtual tours of faraway buildings.

Virtual reality will have a big impact on regular reality, too. Chances are, you’ll need to rearrange your living room.

A new product called Oculus Rift has got the video gaming world ready to go to the next level. Still in development but circulating among reviewers, the Oculus Rift is a head-mounted display worn like goggles over the eyes. It looks like a scuba mask with the front blacked out.

Oculus Rift headsets replace the TV screen during video game play. Instead of players looking at the screen, they’ll see the game all around them. When they turn their head to look to the right, look up or look down or even look behind them, they’ll see what they would see if the game were a real, high-definition 3-D world. The illusion of 3-D is created by slightly different images sent to each of the players’ eyes.

Oculus Rift headsets can be used with dozens of popular games. But it’s likely that many games in the future will be built especially for such virtual-reality displays.

A game changer for the living room

In the coming age of virtual-reality video gaming, the game will be separate from the TV set. That means gaming can happen in the man cave, in a bedroom or in a special-purpose room just for gaming, and one without a TV in it.

Right now video gamers tend to prefer sitting closer to a big-screen TV than a TV watcher might, which necessitates a certain configuration of the living room. The requirement to be up close can go away, freeing up the space in front of the TV.

Oculus Rift headsets are currently available only to software developers for preorder. The company has not announced a ship date or price for consumers.

Virtual-reality gaming headsets like Oculus Rift will usher in a new world of gaming products for homes. One of the first such devices is a kind of hybrid between gaming gear and exercise equipment. Called the Omni treadmill, from a start-up called Virtuix, the game is designed to let the player walk, run, turn around, jump and do other movements that are actually registered in game play.

The “treadmill” itself has no moving parts, just a slippery, curved surface. Special shoes are worn by the gamer; they’re designed to slice across the surface while moving in straight lines, thanks to hard plastic grooves on them.

The product is still in the crowd-sourced funding phase on Kickstarter, although the company has already raised far more than it set out to.

The bigger issue is that virtual-reality gaming will usher in lots of big products like this for game-play-environment simulation. That’s yet another reason why video gaming will demand its own dedicated space in the house and away from the TV.

Microsoft has a patent on a brilliant video gaming technology called IllumiRoom. It combines regular onscreen video game play with peripheral-vision projections on the room’s walls, floor and ceiling.

As you move through an onscreen virtual jungle in a game, for example, the entire room becomes an extension of the screen and the jungle. When you’re in a racecar game, the cars move from the screen to the wall on either side of the TV to the walls on your left and right as you pass them.

Microsoft announced recently a new version of its Microsoft 360 product that has a built-in Kinect sensor that’s much better than the current model. It uses cameras to see the position and motion of the players, enabling them to jump and throw and punch and dance to affect onscreen play. The combination of Kinect and IllumiRoom in future versions of the Xbox will mean the entire room will be engulfed, in projected visuals and for the movement of the players.

IllumiRoom will bring gaming back to the TV and living room, but — so long, coffee table — will benefit from open space in the middle of the room.