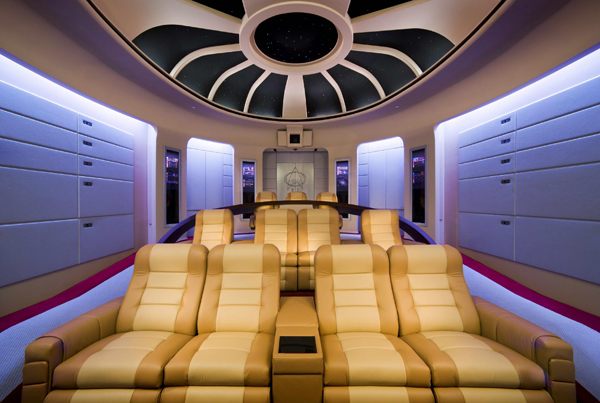 Located in Palm Beach County, FL, this home has taken the topic of Star Trek home theater ideas to the final frontier. Considered one of the best in the themed theater category, we definitely think it’s worth another peek.

As you can tell, the anonymous owner is definitely a sci-fi buff. However, being a “Trekkie” is only one aspect of his interests—but it’s the: one that spawned some killer home theater ideas.

Years ago, the: owners had originally envisioned a traditional home theater. However, Jay Miller, president of Acoustic Innovations, noticed that their client was a collector of “vintage” video games. From there, several home theater ideas were discussed, but ultimately the owners opted for something that expressed their sci-fi interests. “It adds a lot to the experience because you are introduced to the ‘theme’ when you enter the bar and ready room area,” says Jeff Hoover, dream maker and president of Audio Advisors. “It sets the mood that something cool, fun and exciting is about to happen next.”

Something exciting did happen. Discussions on how to handle the theater began back in 2002. “We initially considered the original Starship Enterprise, NCC-1701,” says Hoover. “With a more updated look, Enterprise NCC-1701-D was selected as it depicted a grander version of the ship.”

The three areas took a total of six months. The end result was a theater, bar and ready room, measuring a total of 70-by-22 feet.

After a few belts at the intergalatic bar, there’s the main attraction: the theater. In the back of the theater is a hidden closet. It doesn’t contain aliens or even captains’ costumes from past series; it houses most of the theater’s main equipment. “If you don’t know it’s there, you wouldn’t have an idea that it existed,” says Hoover.

Source gear as well as the AV distribution stuff is located in an adjacent room. This is also where you will find what Hoover claims is “one of the largest Kaleidescape hard-drive-based storage systems that I’ve ever heard of in a residential installation.” How big exactly? Think big bang, baby—at last count, there were eight servers with 3,816 DVDs.

The equipment list is extremely impressive—and it’s got even got awards to prove it. In 2007, CEDIA (the Custom Electronic Design and Installation Association) chose this room as its top theme theater. However, they weren’t the only ones that were impressed with the outcome. “The homeowner was, to quote him directly, ‘blown away’,” says Hoover.

The theater experience may be awesome, but it’s the little slice of sci-fi that gets our pointy ears tingling with delight. “The client has amassed a very large collection of original props, models and drawings from Star Trek, TV series and other sci-fi movies,” says Hoover. Highlights include motion-activated air-lock doors with series sound effects. There’s even a “Red Alert” button on the Crestron TPMC-10 controller to turn all of the LEDs bright red and flashing, along with the actual sounds from Star Trek blaring. “If you don’t know it’s coming, it scares the pants off guests.”

Even though there have been plenty of sci-fi themes since we first showed this room: (and it’s since been passed on to other owners), there’s certainly no denying that this theater is a spectacular showcase. Hoover says that the homeowner is already plotting his next project; there are no details, but something tells us it’s going to be out of this world.

For a better peek at this sci-fi spectacle, check out our slideshow below.