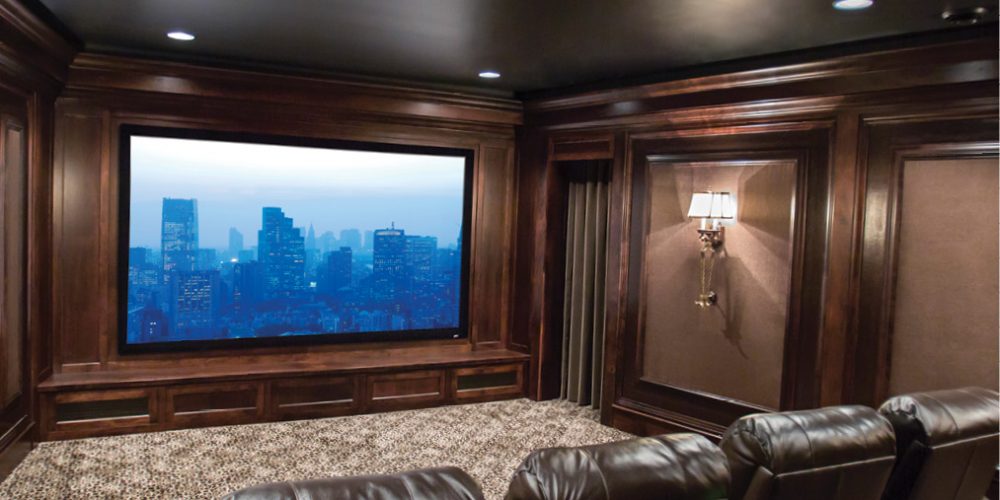 DURING SOME HOME RENOVATIONS it can be hard to see the light at the end of the tunnel. A poorly designed room can turn a seemingly simple request into an impossible task, and if that’s the case, the only solution may be to move backward before you move forward. In this particular home, which was inherited with some less-than-finished areas, the goal was to turn an under utilized basement room into a high-performing home theater. The problem was that it was separated from the rest of the basement by a boiler room, with the added frustration of its doorway being located in the middle of the rear wall. All of these structural roadblocks would result in a major design overhaul.

“This space was simply ill-suited to be used as a home theater and wasn’t up to the standards of the rest of the house,” says Brian Duggan, vice president of home systems integration firm Union Place, of Excelsior, Minn. “Having a doorway in the middle of the rear wall was a big problem because it makes it difficult to place seats effectively in the room, and you would have had to walk through the home’s utility room to get to it anyway. No entertainment space should require you to walk through the home’s boiler room. After coming up with several designs trying to work with the space we had, we finally had a revelation and convinced the homeowner to move the door and create a new hallway to connect to the other side of the basement.”

Once this breakthrough was realized, the real fun began. The homeowner wanted the theater to feel like a luxurious library, but without the expense of extensive woodwork. Working with a relatively modest budget, Union Place presented the idea of using trim millwork and eliminating much of the raised paneling, then surrounding the room’s acoustical panels with faux-alligator print wallpaper. As a bonus, this left room in the budget to use wood paneling for the proscenium in front of the projection screen, where it is most noticeable.

Of course, even the most well-appointed home theater needs matching high-quality audio and video gear, which shines in this installation. The space is decked out with a 120-inch Elite Screens Peregrine projection screen, 1,700-lumen Sony 3D 4K projector, Episode 900 Series in-wall speakers with Anthem amplification, and two Triad subwoofers that are hidden behind metal grilles that match the heating and cooling vents.

“The client didn’t want any speakers to be visible, so we created a fantastic surround-sound system by placing the left, center, and right speakers behind the screen and the surround speakers behind acoustical paneling on the walls on either side of the seating,” Duggan says. “The eight Palliser reclining chairs provide the ultimate comfortable viewing experience, and the velvet drapery we installed on the secondary entrance adjacent to the screen acts as a sound and light buffer to the billiards area.”

The second door was an important consideration because it allows for a free flow from one area of the basement to the other, so the family and guests can easily move between the theater, wet bar, wine cellar, and game/billiards room. Another special touch in the theater are the color-changing Calrad LED rope light accents on the raised ceiling that, along with the rest of the lights, are controlled and automated through the home’s Control4 system.

Keeping It All Connected

The rest of the home has a Control4 home automation system, so it only made sense to outfit the home theater with Control4, as well. When you start using advanced electronics, simplicity is king. With a few touches in the mobile app, the owners can change just about everything in the home and theater, and they didn’t have to learn a new remote control to enjoy this gorgeous setup. This isn’t always the top concern for buyers, but a good installation firm will usually make sure you’re buying a system that is easy enough for the whole family to use.

Controlling the theater is simple and familiar, thanks to a dedicated Control4 hard-button remote or a Control4 app that’s accessible on the owners’ mobile devices. Theatergoers can watch TV programming from a DirecTV receiver or view their favorite movies courtesy of a Samsung Blu-ray Disc player or Apple TV, as well as stream music into the theater through the home’s Sonos system. The equipment rack is conveniently housed in a utility room, making access easy for any future additions or upgrades and providing ample ventilation.

Hiring a company as well-versed on home technology as Union Place helped deliver the desired effect on time and on budget, because they were able to handle every aspect of the project, with the exception of sheetrocking and electrical wiring. Having the millwork, acoustical treatments, carpeting, furniture, draperies, and electronics systems specified, designed, and installed by a single team meant the project turned out exactly as the homeowners had envisioned: a classy, yet casual room with attractive accents that complement the style and decor of the rest of the home. EH