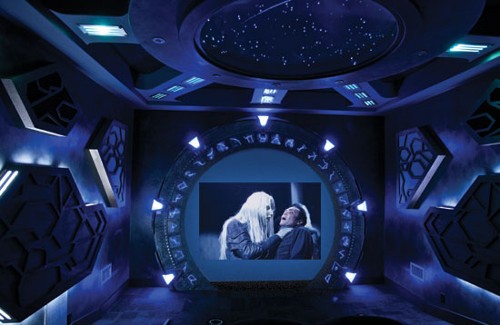 (originally published in Electronic House in 2009)

A home theater can be a great escape, but how about escaping all the way to the planet Lantea, the fictional home of the TV series Stargate Atlantis?

Jacob Yarmuth’s very cool theater in Louisville, Ky., has a Stargate — or at least a replica of the one used in the Stargate TV series and movie to commute across the universe. It surrounds a 10-foot diagonal circular screen that shows a 96-inch diagonal image. The circle within the Stargate can also light up blue, mimicking the water that appears in the show’s Stargate prior to transport.

To say Yarmuth is a Stargate fan is an understatement. He loves sci-fi, and his two Sony megachangers that house up to 800 DVDs can attest to that. The theater, explains Phil Chaney, president of the Louisville division of Visual Concepts, uses a blend of styles from Stargate Atlantis, the original Stargate SG-1 TV series, and the 1994 movie. There are even air pocket doors that open like those on Star Trek and a star dome that shows comets streaking across the sky.

And yes, much like the magic of fictional Stargate, a lot of real-world magic went into constructing this theater:

Wave your hand in front of the Atlantis logo outside the theater, and a motion sensor triggers the air pocket doors to open, like on Star Trek. The pocket doors are attached to pneumatic pumps powered by an air compressor.

The Stargate is made from MDF (medium-density fiberboard), with the symbols, or glyphs, of Lexan (a plexiglass-like resin). The glyphs and other effects in the room are backlit with large, old-style Christmas tree bulbs.

Side panels add Stargate ambiance, but also function as acoustic panels to help absorb the sound.

The fiber-optic starscape from Numinus shows comets appearing in every 30 seconds to one minute intervals. Cove lighting in the dome can be adjusted to create different effects, like that of galactic clouds.

Visual Concepts has an in-house interior designer on staff, and the company also has partnerships with other vendors like Sound Answer of Nashville, Tenn., which did the acoustical treatments.