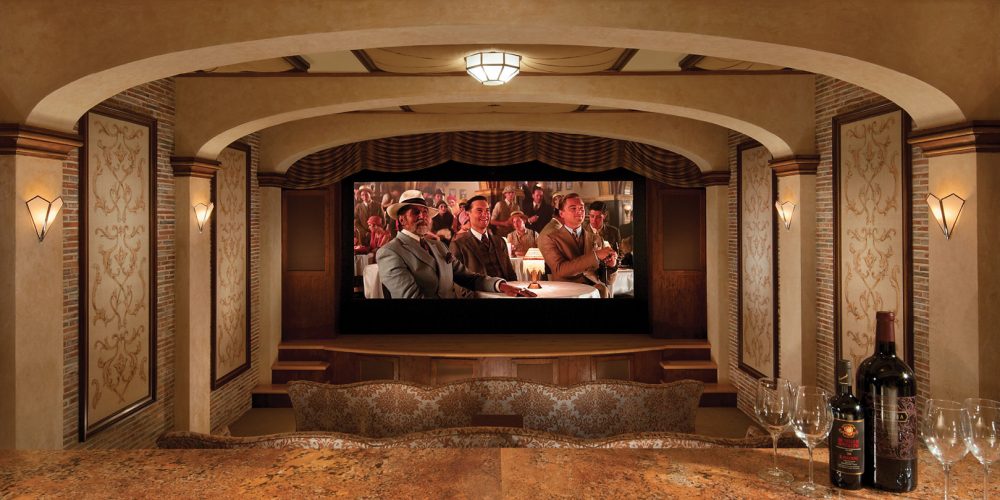 WHAT DOES “GOING TO THE THEATER” conjure in your mind? Driving to the local Cineplex with the family? If you’re fortunate enough to have the space and funds for your own media system, it might make you think of strolling to the next room and hitting “play.” For the owners of this spectacular 770-square-foot entertainment masterpiece, going to the theater is just as much about seeing a live performance on a stage as it is about viewing a blockbuster movie on a huge panoramic screen.

A touch of a button on an AMX remote or iPad tells the screen to retract into the ceiling so that the owners can use the area as a stage for live performances.
A 3D Titan projector from DPI beams images to the screen from the back of the room; the theater and stage equipment are housed beautifully in a custom- designed rack; a motorized lift lowers the center-channel speaker into its prime position behind the screen. The sound fires cleanly through the acoustically transparent weave of the screen material.

Creating an entertainment space that could function admirably both as a venue for live Broadway-inspired productions, put on by the family, and as a top-notch home-based cinema would test the design and integration skills of Cantara, Costa Mesa, Calif. Fortunately, the veteran installation firm had a designer on staff with a college degree and previous work experience in commercial stage design. “Adam [Purath] was invaluable to the success of the project,” says Cantara president Jason Voorhees. “He understood the best way to lay out the room and the types of electronic equipment we would need to replicate the experience of being at an actual Broadway play.”

The end result is a remarkable blend of traditional movie theater and live stage, as the room transitions seamlessly between the two environments through the use of a sophisticated, custom-programmed control system from AMX. In cinema mode, family and guests are treated to a spectacular view of high-def movies presented by the screen-projector duo of a 175-inch-wide CinemaScope-format screen from Stewart Filmscreen and a 3D Titan 1080p video projector from DPI. The built-in surround-sound system, composed of nine speakers and four subwoofers from Genelec, which were carefully engineered and calibrated by Cantara, envelops theater-goers in three-dimensional audio.

As is sometimes the case when designing high-end home theaters, getting such a large number of speakers into their prime positions—and blending them into a traditional decor—called for a bit of creativity on Cantara’s part. Explains Voorhees, to produce the most impactful audio, the center-channel speaker (responsible for dialog) should be placed as near to the center of the screen as

possible. In most home theaters, custom electronics (CE) professionals will simply mount the center-channel speaker on the front wall and have the audio project directly to the ears of the viewers through the acoustically transparent weave of the screen. In this theater, however, the front wall sits about 12 feet back from the screen. (The 12-foot gap was critical for the conversion from theater to stage.) If placed 12 feet behind the screen, the center-channel speaker would lose much of its impact; left with no other alternative, the Cantara crew attached the 180-pound speaker to a motorized lift that lowers the unit from a trap door in the ceiling into the perfect position when it’s movie time.

Tricky speaker placement also gave the homeowners’ daughter, a set design student at NYU, a chance to showcase her artistic skills. After Cantara had recessed the room’s surround speakers into the side walls, she used watercolors to paint soft, free-flowing ivy designs on the surface of several large panels of acoustical fabric. These decorative but functional panels conceal the speakers without affecting their performance.

The surround-sound system, and the rest of the theater, springs to life the moment the owners step into the room and turn on the lights—preset, of course, to be just the right intensity level. This “flip of a switch” tells an AMX control system to prepare the room. “We call it the curtain warming mode,” Voorhees says. Soft pink LED lighting washes over a fabric curtain that covers the screen, and background music from a custom-curated Pandora station plays through the audio system. Using an AMX control app on an iPad, the owner, once settled in a seat, can choose to activate a TiVo receiver, AppleTV or Blu-ray disc player. At the same time, the lights fade, the music stops, the projector starts and the drape lifts to reveal the screen.

Okay, so what about the mysterious stage behind the screen? With just a tap of a finger on an iPad, the owners are able to quickly stow away all the movie gear, as both the screen and the center speaker retract into the ceiling. An Arcam A/V receiver switches out of surround-sound mode so that only the front two speakers are active, and the screen of the iPad presents the owners with more than 60 different lighting scenes from which to choose.

“They can go from a scene that sets the lighting to make the stage look like a rainforest, a sunny day or a foggy evening, complete with actual fog produced by a hazer machine,” Purath explains. In seconds the owners can customize any type of environment they want—a process, says Purath, that would typically require the use of a professional mixing board. The integration of these professional staging products with a robust residential control system was the key to keeping this multifunctional entertainment space simple to operate … and to enjoy.—LM EH