Speaker Solution Goes Outside the Box, Sort Of - Electronic House ​​

Usually the hook on installing in-wall loudspeakers is that they are hardly noticeable, unobtrusive and interior design-friendly because of their ability to blend in so well with the surrounding wall.

In this case, the in-wall loudspeaker installation was done with a twist, rather somewhat calling attention to its design more than usual. It was a bit of a risky design move on the part of New York City-based custom electronics firm The Source Home Theater, but one that left both the homeowner and electronics pro very satisfied in the end.

It also illustrated the problem-solving and creativity that a pro can deliver to an intricate A/V installation.

For this home theater room, the project was actually a repair for a TriBeCa-neighborhood home whose lower level took a hit from Hurricane Sandy. Floorstanding loudspeakers, which served up the room’s front-channel audio previously, were damaged and this time around the owner wanted to make sure the speakers weren’t going to be placed on ground level.

“After the Sandy experience, everybody’s now kind of planning ahead like it’s going to happen again,” says The Source principal Todd Anthony Puma, whose company has dealt with a range of post-Sandy electronics issues.

So in considering both performance and aesthetic attributes, as well as potential future-proofing, Puma and lead installer Jason Johnson worked up an in-wall speaker solution for the front left and right channels (an in-ceiling speaker was installed previously and maintained as the center channel, so it would not interfere with the A/V cabinet below the 144-inch Screen Innovations screen). But then the problem became the lack of space inside the wall to properly accommodate the in-wall Paradigm Signature series models.

“We only had a couple of inches in the wall, so if the speaker was all the way in it would touch concrete and cause unwanted vibrations … and it would get damaged anyway,” Puma says.

The unique compromise was basically to pull the speaker out slightly, which The Source achieved in a savvy way by creating its own backboxes for the speakers as well as a bit of framing to fit into the extra space formed between the baffle and the wall. It was only a matter of inches, but it provided the solution and offered an interesting aesthetic element that the homeowner appreciated.

Johnson mocked up a couple of samples of the custom frame work, which led to the combination of making a backbox from bamboo to surround the loudspeaker inside the wall and mahogany frame for outside the wall. Puma says he went with bamboo because of its flexible and water-resilient attributes, and mahogany because of its looks and sonics. “I’m a guitar player and I think like one,” he says. “I thought if guitar players like the sound resonances of all these companies that make guitars out of mahogany, why wouldn’t we want to use that too?” 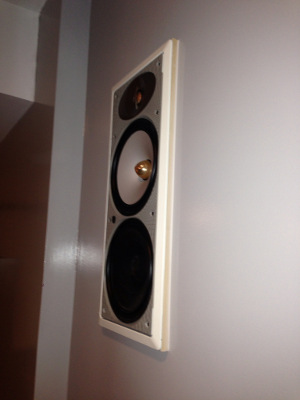 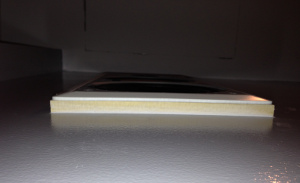 Now the uniquely placed in-wall speakers do not actually touch the wall, thereby reducing potential vibrations, but a visual byproduct was formed because The Source cut the wooden framing so it would be smoothly flush with the projection screen frame. The homeowner then painted the mahogany gray to match the wall.

“She was wary at first, and couldn’t understand the theory behind what we were doing (she has in-wall speakers throughout her home), but she said it turned out better than what she expected,” Puma says. “She went from not believing to turning into a huge fan.” 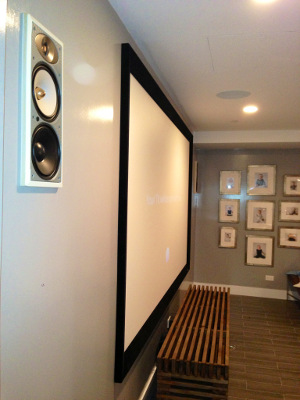