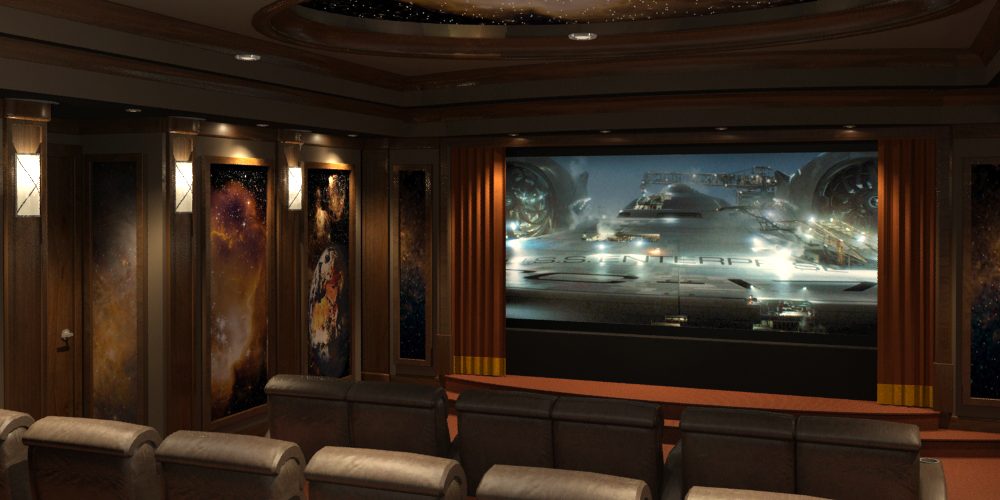 Sitting in a home theater should feel like you’re somewhere else completely. It should transport you to a different world, give you a sense of escape where you can let the sights and sounds overwhelm your senses. In this custom home cinema, the home systems integrators at Kasabe Designs, of Katy, Texas, took its owner to a totally new dimension … outer space.

It was a theme conceived from the get-go, even before the plans for the elaborate entertainment space had been drawn up. “Our client, a space enthusiast, wanted a home cinema that captured the beauty of space as art,” says Kasabe Designs owner Abe Rasoulian. The goal was to create a somewhat traditional looking interior design with images of the galaxy displayed as art on the walls.” The team went above and beyond simply replicating the night sky with a twinkling fiber optic star ceiling; they hired Glen Hoffman, a renowned graphic artist from 3D Squared to create fantastic artistic images of space that could be painted on acoustically transparent fabric. The printed artwork wrapped each of the framed acoustical panels mounted around the perimeter of the room to create a panelized continuous mural of images from our galaxy. The paneling, which comes to life when the accent lighting is activated, is complemented by an equally eye-appealing effect above: a large, oval-shaped “window” on the ceiling that displays an incredible image of the solar system, complete with twinkling stars.

With the theme well established, Rasoulian and his team focused on the integration of the A/V components that would bring this 13-seat home theater to life. “Our instructions from the client were simple,” Rasoulian recalls. “Make it amazing!” Provided with a “healthy” budget, Rasoulian chose top-notch gear that would best suit the size and shape of the room. 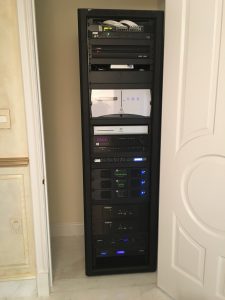 One of the most impressive aspects of the theater is something that’s not even noticeable. Eight subwoofers positioned behind the acoustical wall paneling fill the room evenly with bass, and are accompanied by seven Triad Gold Series speakers. It’s full-force audio that’s fueled by JBL Synthesis SDA amplifiers, processors, and equalizers.

Video is equally impressive, provided by a dVision Scope video projector from Digital Projection. This projector boasts a resolution of 2,560 x 1080 and can display an anamorphic (CinemaScope format) image without the use of a special lens. The projector fires images onto a 2.35:1, 180-inch Stewart Filmscreen screen. Most of the video content comes courtesy of a Kaleidescpe media server and local cable settop box.

The final touch was professional calibration. Kasabe sent the best technicians from JBL and Digital Projection to the project—no small feat given that the home theater is based in a remote part of South America—to fine-tune the audio and video to perfection. 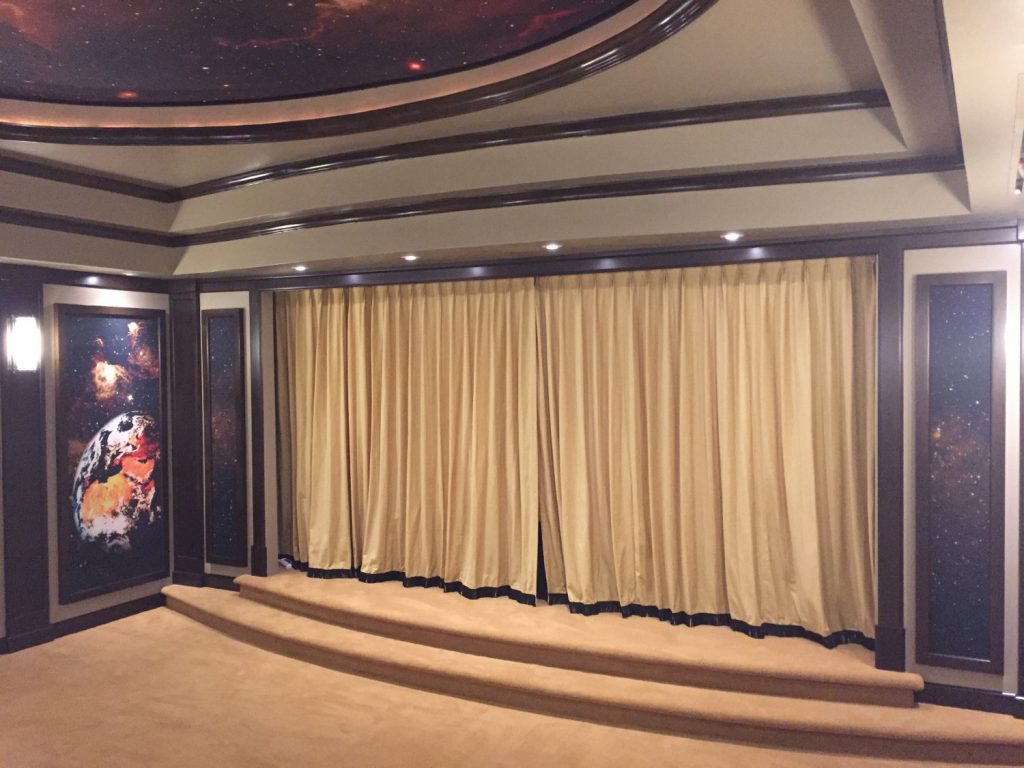 Of course, no home theater is complete without a control system. And when the equipment is as sophisticated as the pieces installed in this room, that system need to be technically robust on the inside but simple to use on the outside. Rasoulian chose to include an AMX control system and programmed several “macros” to boil down that activation multiple components to a single tap of a button on an iPad. “We wanted to make operating everything in the room as simple as possible for the client,” Rasoulian says. “The iPad displays specially designed AMX control menu offers users two choices: “Watch Movie” or “Watch TV.” Whichever the owner chooses, the AMX system shoots off a string of commands to the appropriate equipment and switches them all to the proper inputs. From there, the owner is free to adjust the volume, pause a show, and even adjust the room’s six separate lighting zones, which includes the fixtures and fiber optic features that accentuate the outer space-inspired theme.