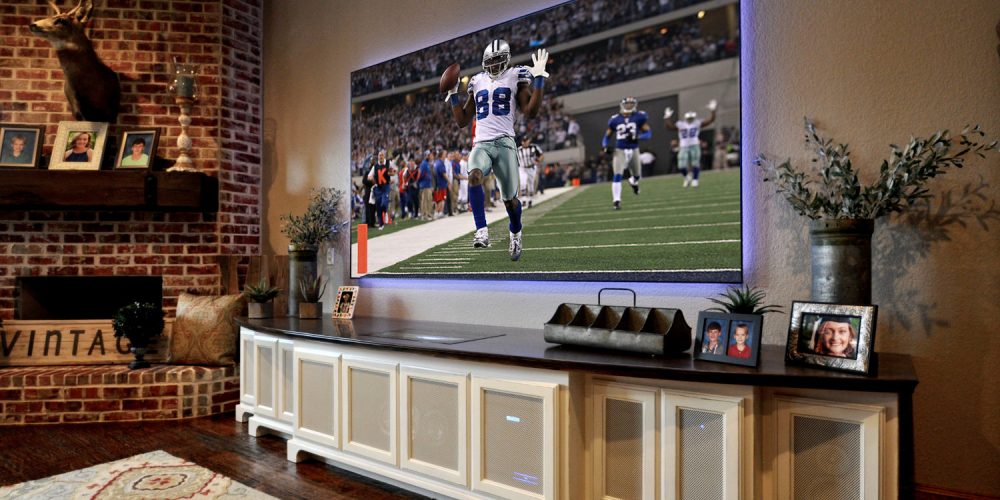 Ultra short throw video projectors may be one of the newest types of home cinema projectors to hit the market, but for one homeowner it was the obvious choice. That is, after he talked with David Huse, CEO and founder of Theater Advice, of Frisco, Texas. Like a lot of entertainment enthusiasts, this homeowner chose to add the necessary A/V accouterments to an existing living room, enabling the space to function both as a casual gathering spot and a serious home theater. And, like many homeowners his first choice for video was a huge 85-inch flat-panel TV.

While there was nothing wrong with this approach, Huse suggested taking advantage of the room’s 12-foot tall ceilings by incorporating a much larger screen—a solution that would improve the viewing enjoyment dramatically, but without raising the renovation budget. To accomplish this, Huse recommended integrating a video projector and a screen, the family would be able to increase the size of the display to 110-inches diagonally, in the form or a Screen Innovations screen. A comparable size TV would have cost and arm and a leg.

The homeowner agreed to this plan, as long as the video projector could be hidden. In most homes, tucking a video projector into the ceiling and attaching it to a motorize lift that lowers it into viewing position is a fairly straightforward project for a home systems integrator. However, after inspecting the ceiling construction, Huse discovered that the ceiling joist were only 8 inches apart. Not early enough space to fit in a projector. “Solving this issue would have required calling in a structural engineer–something neither the homeowner no Huse felt comfortable with.

With two strikes on the board, Huse mentioned one more idea—a short throw video projector. A relatively new option for home theater environments, short-throw projectors are designed to sit only a few inches from the screen—typically on the floor or on a table. This design offers the advantage of easier placement in rooms with structural limitations, like this homeowner’s entertainment space. The homeowner liked the idea, under one condition: that the projector be hidden inside a credenza.

Seems simple enough, but as Huse explains, stuffing the Sim2xTV projector would become a huge mathematical challenge. Here’s why: Because short-throw projectors are intended to sit on top of a table, you can easily position them to create the size and shape of picture desired. To do this with a conventional projector that’s anchored to the ceiling requires tweaking the machines internal settings, and manufacturers provide a lot of them to make zooming and shifting the image relatively easy even after the projector has been mounted. This kind of post-mount tweaking isn’t as easy with a short-throw projector—manufacturers figure you don’t need them because picture refinement is a simple matter of physically repositioning the machine.

Because the Sim2xTV would be permanently stationed inside a credenza that sits 11 inches off the wall, Huse would need to get position it perfectly right off the bat, as very little after-installation shifting of the projector lens would be possible. “I spent seven hours trying to get the projector to make a rectangle. Usually I can do this in minutes,” Huse relates. “This was probably the hardest job I’ve done in my career.”

The end result, though, speaks for itself. The projector is completely imperceptible, the image on the screen is impeccable, and Huse topped it off with Paradigm Prestige speakers and a Definitive Technology subwoofer in a 5.1 surround-sound setup, Marantz A/V receiver, Xbox, and a universal remote to control entire entertainment system. The total cost with installation: $35,000.