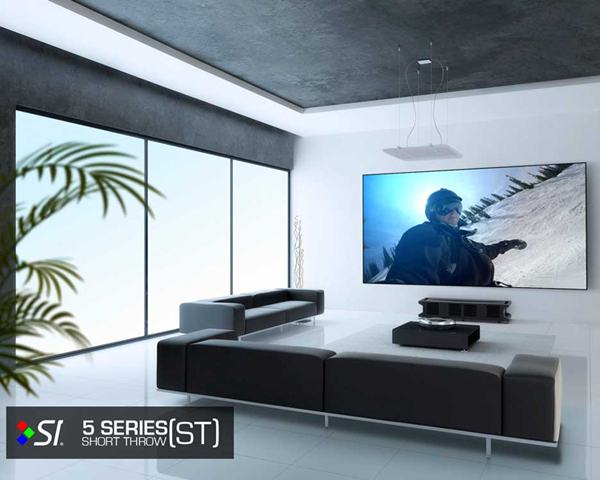 A while back, Sony made a huge splash with its LSPX-W1S 4K Ultra Short Throw Projector. The hook on this projector model is that it can deliver an eye-popping 4K image in theater sizes, but in much smaller rooms. No dedicated theater space is needed! However, you’re going to need a screen if you want the best picture possible.

However, the company wants you to know that the ST 5 Series pairs perfectly with that Sony projector. To get that point across, SI has partnered up with Sony, in order to distribute 5 Series Zero Edge ST home theater screens with the LSPX-W1S 4K Ultra Short Throw Projector.

Those 5 Series Zero Edge ST home theater screens are made from proprietary optic screen material, which boasts a 180-degree viewing angle and better overall contrast. That means you won’t have to worry about the picture being all washed out, even in a room that has lots of ambient light. SI also offers optional LED backlighting with 15,000 programmable color options.

“There’s a movement within the average modern day home market, trending towards smaller spaces and more efficient use of the available square footage. Naturally, ultra-short throw lends itself really well to this whole concept. Because you only need a few feet of room for placement, you could easily fit the system into even the tightest of spaces,” said Skyler Meek, SI’s marketing director, “”In a smaller room, some applications of traditional two-piece projection would be all together impossible (not enough throw distance, or challenging mounting propositions). Not to mention, with Sony’s application, they have actually incorporated optional speaker cabinets and storage into the design of the unit, which takes the incorporation of the design and application to a whole new and exciting level.”