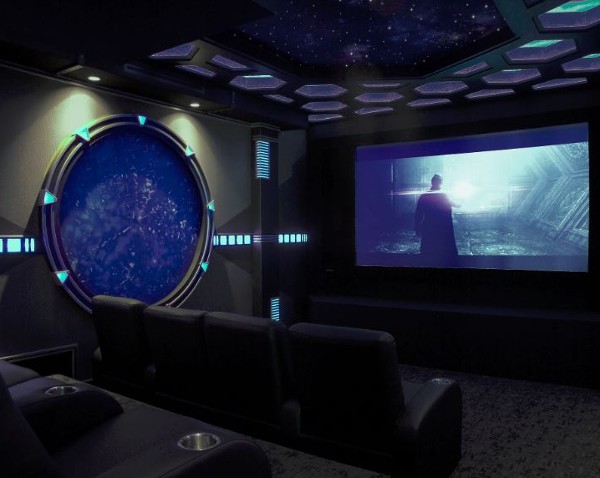 When Carey Schafer, vice president of Cinema Design Group of Boca Raton, FL meets a new home theater client who wants to go over-the-top with a unique custom home theater design, he always first cautions the owners that they’ll have to live with that design for a long time. If the client passes the test, then the fun begins. The owners of this sci-fi home theater are serious StarGate fans, so a StarGate-themed home theater was something they knew would keep them entertained for many years.

The seven seat dedicated home theater design was designed by Cinema Design Group and led by designer Emily Firtel, while the electronics integration was done by CDH Electronics of Naples, FL. The room features some serious home theater gear including a Digital Projection Titan 330 DLP projector built into a soffit box on the ceiling, and a complete JBL Synthesis speaker system, all hidden in the walls. Elan g! home automation operates the room as well as the rest of the house.

As any StarGate fan will know, the watery portal to other worlds is an iconic feature of the sci-fi series, and so had to be included in this home theater design. To create the portable Cinema Design Group had their graphic designer create the design, which was then printed on acoustic fabric with a special dye sublimation printer. LED lights accent the entire room to give it an out-of-this world appearance.

A custom designed coffered ceiling with an LED-lit star feature looms overhead when guest relax in the custom theater seats. Each individual 5-sided coffer is coated with something CDG calls sparkle paper—a glass bead material that lets the LED lighting through in an other-worldly way. The ceiling was so complex that it had to be built in CDG’s shop, disassembled, and the reassembled and installed in the room.

Nearly everything that went into this home theater design not only looks impressive, but is also crafted for its acoustic qualities. Acoustically transparent fabric covers all the room’s walls and conceals both the JBL speakers and the acoustic panels that ensure a perfectly tuned room.

One of the room’s biggest challenges, says Bergoine, was getting the wire path right for the ceiling, so the lighting worked just as intended. The result is stunning.

When the owners aren’t marveling at the walls and ceiling, their attention is forward on the 179-inch cinemascope Stewart Filmsceen curved screen (with acoustically transparent Stewart Grayhawk screen material). The screen takes up almost the entire width of the front wall, making for an eye-filling viewing experience. Under the screen in a custom cabinet hide two JBL Synthesis subwoofers.

The owners are beyond thrilled with the result, and enjoy having friends over to watch their favorite sci-fi movies.