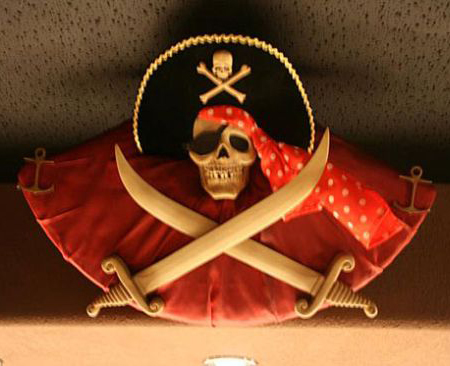 In honor of “Talk Like a Pirate Day” (September 19), we wanted to take a peek at one of our favorite theme theaters. Enjoy, me hearties!

A bottle of rum may be enough of the pirate’s life for some. However, for Paul and Emily Konold, it’s all about the home theater.

On one of the Konolds’ yearly pilgrimages to Disneyland, Paul didn’t just have a good time—he had an epiphany. While taking a ride on childhood-favorite-turned-box-office-monster Pirates of the Caribbean, Paul came up with the idea to turn his home theater into an homage. “I have always loved that ride as a kid,” he says. “It has a feel that nothing else can bring.”

The design incorporates a few things from the movie trilogy, but most of his ideas actually came from the experience of the ride. The walls include scenes from the ride and the movie, and the room is scattered with items that were bought from Disney directly or built by hand.

Inside, there are arches with murals painted by an artist—13-year-old Caden Jones. He was one of Emily’s former students. “We hired him to paint in each of the arches along our theater,” Paul says. “There are six 5-foot arches (three on each side) running down the theater.”

The artwork, along with the lighting scheme, gives plenty of reason to baton down the hatches; the room has a chilling feeling even before one blip hits the screen. “Kind of like when you first get on the ride, you feel like you are floating down the bayou at night,” Paul says. Without the light is a true delight for any budding-buccaneer; that’s when the starfield kicks in.

Of course, putting together the room wasn’t exactly one wild ride. “Trying to recreate something that is so iconic as Pirates of the Caribbean was extremely difficult,” Paul says. “I don’t know how many times we would build, tear down, and rebuild things.” Those do-overs included building the riser at least three times.

Also, there were the two windows that were planned for the basement, which Paul didn’t want brightening up his theater room. Paul got to exercise a bit of his swashbuckling skills when it came to dealing with the city. In the end, he wound up removing one window from the plans and moving the other into the lobby area.

Avast ye, AV mateys—this pirate’s perils were well worth it. Aside from the special effects, the room includes a 16:9 screen, which has: a custom masking system to make the setup 2.35:1. “I knew I wanted 2.35:1 because Pirates and all Disney movies are that format, but I also want the ability to have 16:9,” says Paul. “I am a huge sports fan and they are all in 16:9. So I need both.” Since it satisfies all of Paul’s video needs, it’s no wonder that it’s his favorite part of the room. Also, since it’s acoustically transparent, it allows him to hide some of the audio equipment. “Not too many pirates have woofers, tweeters, etc.”

Other highlights include the detailed lobby, known as Laffite’s Landing, which is part of the original theme park attraction. Follow that area’s wood plank floors, whiskey barrels, and gold, and you’ll find the real treasure: that bar at the back of the theater. Here, guests can belly up for some grog and gaze at the room’s details. During movies, the top of the bar lights up, making it a lot easier to study the treasure maps and gold under the glass tabletop.

“I love the bar in the back of the theater,” says Paul. “The wood really adds a lot to the theme and the way we were able to put a treasure map and gold coins and different props under the glass really makes it a highlight that everyone seems to remember when they come over for a movie.”

Despite their dedication to the ride, the couple does enjoy the big-screen trilogy as well. “Johnny Depp has done a wonderful job with his role.” In the role of installer, Paul’s done pretty well too.

Seeking more buried theater treasures? Check out another one of our favorite pirate-themed theater rooms.