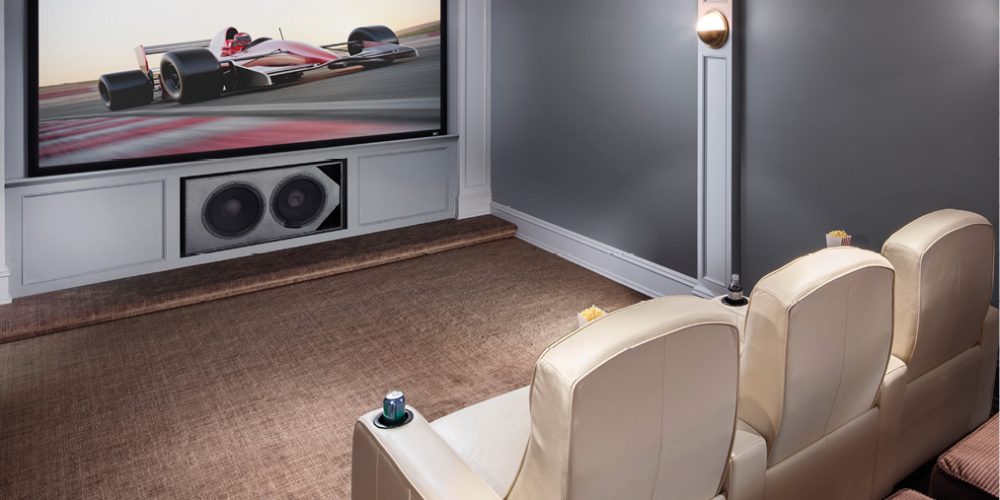 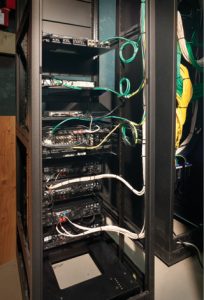 A HOME THEATER IS AS MUCH AN EXPRESSION of a homeowner’s personal tastes as the clothes he or she chooses to wear—whether it’s a beautiful space with design-conscious technology or a room where performance takes precedence over aesthetics. The owner of this award-winning home theater wanted the full cinematic experience, but had a firm budget on which to attain it. (Yes, he did still spend between $75,000 and $150,000, the pricing category for which this project was submitted; but, it’s easy to spend well over this amount for a custom, professionally installed home theater.) There was absolutely no wiggle room on the spending limit, which meant the home systems integrators at Electronics Design Group (EDG), of Piscataway, N.J., had to be very concise with their initial designs for the electronics integration in the 22x13x10-foot theater. Ongoing changes (and their associated costs) were simply not an option. Aside from budget, earth-moving audio and technology that would stand the test of time for a growing family were the homeowner’s top priorities.

To accomplish the goal of blowing away friends and family when the speakers fire up, David Devanna, EDG systems designer, chose commercial-grade Klipsch Theater Series speakers along with Klipsch Dual 18-inch subwoofers driven by four 700-watt professional-quality Crown Audio amplifiers. “For the same price as a high-end residential audiophile system, I can install these pro cinema commercial-grade speakers and amps to create audio that will knock anyone’s socks off,” says Devanna. “The only difference is, we put them in a residential basement theater instead of a movie theater, so the homeowners’ performance expectations were not only met, but far exceeded.”

But with big power comes a big footprint. The Klipsch speakers are not small or easily camouflaged. “We didn’t try to hide them. You can see the speakers clearly above and below the screen, and it looks great,” says Devanna. To keep costs under control, EDG chose residential processing and video switching from an Integra 7.2-channel THX network A/V processor, which allows the family to enjoy the latest surround-sound processing formats and seamless integration with a Savant control system. Compared to a commercial processor, which would have been expensive and more difficult to integrate into a home environment, a residential receiver made more sense. 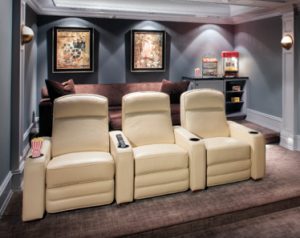 People change their minds, budgets shrink, and what might have seemed appropriate at the onset of a project morphs into something that can easily spiral into a financial fiasco. The home systems integrators at Piscataway, N.J.-based Electronics Design Group (EDG) know how to manage evolving homeowner desires and expectations. “If the client has an idea, we have to examine how much it will cost and make sure that we completely understand what they are asking for,” says EDG systems designer David Devanna. “For example, lighting control could be a huge subsystem and a hefty part of the budget or as simple as a dimmer switch. We always clarify before we come in with numbers.”
On this project, the basement orientation changed midway through the process due to mechanical requirements. Since there was no flexibility in the owner’s budget, the design team had to readjust its plans without affecting the bottom line. “By working closely with the general contractor, we accomplished this, while meeting the expectations of the homeowner and [coming in] on budget,” Devanna says.

The Savant system allows the homeowners to operate the A/V equipment and Lutron lighting control system via iPads, iPhones, and a Savant iTouch handheld remote. For example, with the swipe of a finger on a mobile device, the lights fade and the family can watch their favorite films in sparkling quality. A darkened room certainly helps maintain the crispness and brightness of the images provided by an Epson projector and 125-inch, 2.35:1 Elite Screens screen. But EDG went the extra mile to ensure the best quality picture by carefully calibrating the projector. As the home theater gear warms up, on cue from the Savant app on a smartphone or tablet, the homeowners can choose what they want to watch with ease, whether it’s the Samsung Blu-ray player, cable TV, or Apple TV.

“The finished theater really did achieve the objective of movie theater-sound quality and effects, and the design is classic,” says Devanna. “Considering the preset budget, we had to dig a bit deeper to properly specify the equipment used while being sensitive to budget. But in the end, the homeowner was extremely happy with all aspects of the space, from performance, to aesthetics, to value.” EH