There are lots of reasons to want a projection system for your home theater video display. The pleasure of placing big speakers next to or in front of the screen isn’t one of them, which is why commercial theaters put the speakers behind the screen.

Home theaters can be set up the same way, but they usually aren’t. Why’s that? Because for a long time the only way to make a screen suitable for placing speakers behind it was to poke holes in it—these are called perforated screens. Perforated screens, when viewed up close, look just the way you’d think—they’re covered with a pattern of holes. It’s a good idea, but one with several problems. First, to make sure you’re not compromising the sound quality of the speakers, the screen needs to have lots of holes or big holes. But when there are holes, things are going to fall through them. In the case of a home theater projector, that thing falling through is going to be light. The more light that passes through the holes, the less light the screen reflects back toward the audience. In effect, a perforated screen can throw out some of the light you paid a lot of money for.

The other big objection to perforated screens is that they contribute to something called the moiré effect. This happens when the pixel structure of the projector interferes with the pattern structure of the holes in the screen. What you get is something like a criss-cross pattern on your movie. Try looking through two window screens at the same time, and you’ll see what I mean.

The Seymour Screen Excellence Enlightor 4K screen approaches the problem a little differently. Rather than a perforated screen, the Enlightor is a woven material, but not just any ordinary woven material. When you look at it close up you notice two things. First, the weave appears to be random; there’s no discernible grid to the weave. The other thing you notice is that there are no holes. The weave appears to be so tight as to be a completely solid screen even when you put your face up close to it. See photos of the material up close: 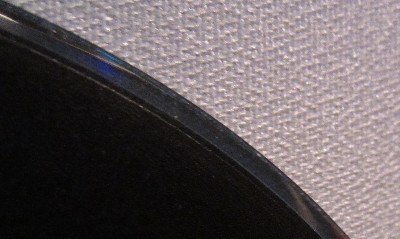 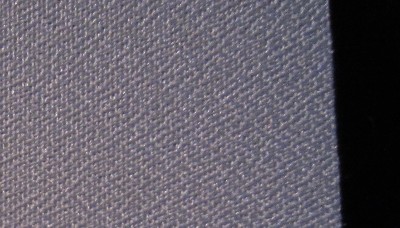 So why would you want an acoustically transparent screen? The benefits include the ability to hide your speakers without any acoustic compromise, but beyond that, you can experience the sound from the place where the action is happening. Some people opt for in-ceiling speakers as a way to avoid putting speakers in front of the screen, but in that situation the sound is coming from above the action, not from the picture. Do you want the actors’ voices to come from their mouths or from a space a few feet below their mouths? The difference can be subtle, but noticeable once you’ve tried it.

Seymour also says there’s no minimum seating distance—due to the fine weave. So the seating distance is largely dependent on your room, your preference and your projector. Using a 4K projector will allow you to get closer (or use a bigger screen) before you can see the projector’s pixel structure.

Set up
Unpacking and assembling the screen and its fixed frame takes two people. Most users will have their installers do the work, but I recruited a friend. Altogether it took a bit more than an hour, maybe longer, because we had some issues particular to my setup.

Upon unpacking, I was surprised with how light and delicate the screen fabric appeared to be. I joked that it would make a perfect for a dress for my daughter, if she needed a dress with a .98 gain. Because the screen is lightweight and thin, light can pass through it, so it ships with black backing material that covers the back of the screen. Seymour recommends you use this if the wall (or whatever) behind the screen is not a solid dark color. If the speakers you plan to install are at all reflective (perhaps they’re white or include shiny tweeters) then you should use the backing.

Unlike a lot of screens, the Enlightor doesn’t snap to the frame. Instead the material fits into a groove around the edges of the frame. A plastic spatula-like tool is supplied, and once we got the hang of it, we were able to get the material installed without a ripple or seam. The frame itself is covered with a black velvet boarder.

Once the screen was safely up (with room for the speakers behind it), I tried out a series of projectors and sat back to enjoy a few movies.

While the most innovative feature about the Enlightor 4K is its acoustic properties, it’s still a projector screen, which means it’s got to make a good picture first before anyone considers it. The material is ISF certified, which should be a comfort to video enthusiasts. The company also says that this material is used in some professional studios.

The Enlightor 4K is a white screen with a .98, which isn’t a large gain, but it’s enough. This isn’t a screen for a room that will have lights on for much of the time, but some ambient light didn’t make the image unwatchable (so you can have your football party in the room).

All the movies and test patterns I threw at the screen looked great. Colors were vibrant. Blacks and shadow detail were as good as I expected from the projectors I had available. I have a small Stewart Grayhawk which I moved in front of the Seymour so I could compare the two–colors, especially yellow, on the Seymour were more vibrant when viewed in a dark room. While the screen itself does have some slight texture, the image you see doesn’t show this in use. The velvet coating on the frame also did a great job of killing any spare light from my sloppy tabletop projector setup.

Off axis viewing can also be an issue with a projection system. If the screen throws all its light straight back toward the projector, and presumably the viewer, than viewers off to the side may get a slightly diminished picture. Testing the Seymour screen for this situation creates a bit of a problem. In my room, the 120-inch screen (diagonal) left only a few feet on other side of the room—it essentially filled the wall. In order to really check for any off-axis light drop off I’d have to go beyond the confines of the room. I moved as far to the side as I could (which wasn’t far) and didn’t experience any change in the picture. Most screens are designed to not throw a lot of light off to the side, because that would result unwanted reflections off the side walls. Still, this is interesting because using an acoustically transparent screen can actually kill two birds with one stone. It not only allows you to hide the speakers, but it also allows you to size your screen so large that no viewers will have an off-axis view. Cool. Of course, this will depend on how you have your room oriented.

Sound up
Seymour says that the Enlightor 4K’s unique structure allows sound to defract around the threads, so as to not impact sound quality, and it only creates a 2dB attenuation, which is easily corrected. In my setup I didn’t have installed speakers behind the screen, but I placed some Definitive Technology speakers behind it, and then moved them to the side and bottom (the way they’d be arranged for a non-acoustic screen).

My experience confirmed the company claims. The quality of the sound was unaffected by the material, and only required a level adjustment to match speakers not behind the screen. 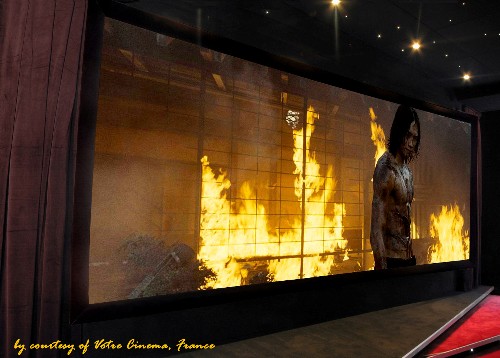 Final Thoughts
Many people, when thinking of setting up a projector-based home theater, don’t consider that it’s a TV-piece system. The screen can play as important a part of the picture as the projector, and in the case of an acoustically transparent screen, selection plays an important role in the theater’s sound as well.

The Seymour Screen Excellence Enlightor 4K material proved that it could deliver on both picture and sound fronts by displaying a gorgeous, rich picture that wasn’t marred by the presence of speakers placed at an unnatural level.