Dig this from the Sept./Oct. 1987 issue of Electronic House: Double Play allows users to scan channels on the smaller screen without interrupting views on the bigger screen. VCR is required.

Now you can forget that old picture-in-picture stuff. Today you have picture next to picture next to picture. Here’s a killer system installed by EDG in Piscataway, N.J., with 18 screens on three TVs, thanks to an Extron matrix switcher and an RGB Spectrum picture-in-picture processor that multiplexes them and allows six outputs to each of the TVs. And by the way, it won our 2010 Home of the Year contest (Read about it here).

Or, use Crestron’s DVPHD processor that allows eight images on one screen, in this theater that won our Silver Amazing Apps award in our annual Home of the Year contest. (The DVPHD processor also has an annotation feature that allows it to be used like a telestrator—just like sports commentators who diagram plays over the video image. 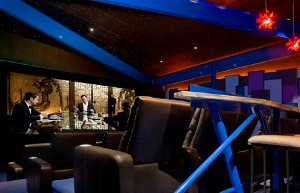 “Processors such as the Crestron DVPHD come in a multitude of configurations with a variety of video input and output types from various manufacturers,” says Jason Spence, of Audio Video Interiors (AVI) of Middleburg Heights, Ohio, which installed the DVPHD processor/telestrator. “There are products much like the Crestron piece used in light commercial settings that can handle from four to eight simultaneous video windows to a single display, and and there devices used in mission critical command centers that can accommodate over a hundred video inputs spread out to multiple projectors edge-blended onto one very large screen. At its most basic level, a personal computer can perform this function, usually with lower resolution video windows though.”