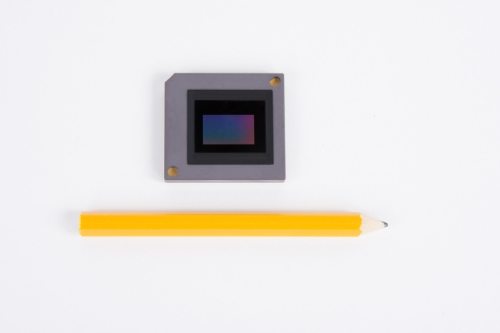 If you’re a fan of crystal clear, lifelike video, you know that 4K is the way to go. And if you’re building home theater, you know that a 4K video projector will provide a stellar viewing experience. Unfortunately, 4K video projectors have been a little hard to come by … until now. With the recent announcement by Texas Instruments (TI) of its release of a 4K DLP chip, home theater enthusiasts should have an easier time finding 4K projectors from a wider variety of manufacturers and at more affordable prices.

During the development of the TI chipset, manufacturers including Digital Projection, Panasonic, Christie, SIM2, Optoma, Barco, and BenQ ceded a headstart in the 4K market to Sony, and to some extent Epson (“4K Enhancement” technology) and JVC (“e-shift” technology), which offered their its own versions of 4K.

The new 1.4-inch DLP 4K Ultra HD (UHD) chipset from TI, which features a 0.67-inch digital micromirror device (DMD), was 18 months in development, according to Roger Carver, technology analyst for TI’s DLP Technology Department. It offers fast switching speeds with advanced image processing to create a more affordable solution. Projectors employing the chip are capable of achieving a light output of up to 5,000 lumens.

It appears as if manufacturers are eager to implement the technology. At the Consumer Electronics Show in January, Optoma, for example, touted what it called the “world’s first single-chip 4K DLP projector.” Meanwhile, Panasonic has just introduced the PT-RZ570U single-chip DLP projector capable of 5,000 lumens aimed at the commercial education market.

Carver says there are multiple factors that “make 4K great,” including that it produces 8.8 million pixels on a screen, offers precise pixel alignment, and superb ANSI black and white contrast. The new 4-million mirror chipset from TI is a 4X improvement over the offerings from Sony, JVC, and Epson, he adds. It is made by using the company’s TRP (Tip & Roll Pixel) design, which is also employed by many pico projectors today.

So why did it take TI took so long to release the chipset? Carver points to the lack of 4K content. “2016 is the right time. Content is growing at an exponential rate. We had to make tradeoffs in our investments, so we waited until 4K standards were in place, including HDMI 2.0 and HDCP 2.2, because we want this to be a volume product. The time was not right for us to produce a 4K chip before this time because there wasn’t any content anyway.”

TI has had a larger 1.4-inch 3-chip DLP chip on the market for a while that can accommodate 4K. While Optoma, Panasonic, and others are unveiling new units now, the full production of the TI chip will not be available until Q2, according to Carver.