Why You May Want a Dark Home Theater Screen - Electronic House ​​ 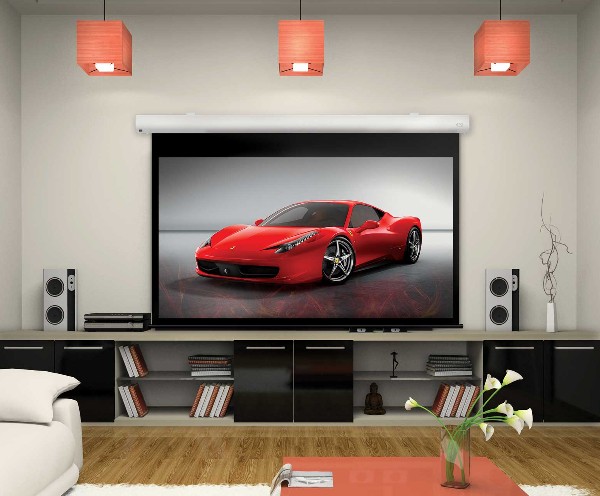 If you walk into any commercial movie theater you’ll see that the screen is white, but when your home theater designer shows you examples of screen material for your room, some of them will be very dark, and you may even be offered a screen material that’s nearly black. What’s that about?

I’ve always thought of home theater projectors and screens as a kind of magic. You take the projector, which is a big, powerful flashlight, and then shine it on a surface. Suddenly that surface takes on whatever color is thrown at it. Yup, magic. However, there’s quite a lot of science in there too—the science of light and reflection. Learn more about home theater projectors here.

Let’s back up a little. To get the image shining from a projector to eventually reach our eyes, we need it to be shined on something that will reflect it back at us. The problem is that when you shine a light on a surface, the surface characteristics have an effect on the color/brightness/contrast of the reflected image. That’s why most reference home theaters and commercial theaters use plain yogurt white screens.

The downside of a matte white screen is that it only works perfectly in a completely dark room. If your home theater isn’t designed to be a goblin cave, then an ordinary white screen will give you a washed out picture when you have any lights on in the room. Read tips for the DIY home theater builder here.

Increasingly, people are putting projectors into multipurpose media rooms. Those rooms may have a bar or pool table at one end. They may have some windows that let in light. They may be full of lamps. They might even have *gasp* white-painted walls which bounce light all over the place. This is where darker screens come in.

The first dark screens were just a shade of gray. They helped preserve some of the contrast that would get lost when a little ambient light entered the room. As projectors themselves got brighter (you can now buy 2,400 lumen projectors for less than $3,000), screens could get darker but still look plenty bright. There are now some screens that are essentially black, so when you watch dark movie scenes in a room with the lights on, the image is still black when it needs to be. Interestingly, you can still create white on black screens because if you shine enough light on something, you’re going to get white (that’s the magic stuff again).

In addition to a black or dark gray screens’ ability to preserve contrast, those screens also contain light rejecting layers which turn away light that is coming from anywhere other than the direction of the projector. That means that if you have a wall sconce or lamp on the side wall, it won’t ruin the picture on the screen. If you’re starting your first home theater project, read Front Projection Basics.

All this is done so you can watch a movie with the lights on.

Most of the major home theater screen manufactures make dark screens for light rooms. Here are a few worth looking into: