Just like people, video content comes in all shapes and sizes. Blu-ray movies can be shot in a wide, panoramic 2.35:1 format, while sporting events are typically broadcast in a more standard high-def 16:9 shape. Then there are those old analog TV recordings you might still own, which most likely were shot in the squarish 4:3 format.

Since one screen may not fit all video, masking systems have become a popular amenity in home theaters. Powered by an electric motor black fabric masking slides over portions of the screen to alter its shape. In many cases, the fabric panels move over the screen from the top and bottom, effectively making a wide screen horizontally narrower. These are called horizontal masking systems. Several stopping points can be programmed into the system, creating several different aspect ratios, including 2.35:1 (CinemaScope), 16:9 (high-def TV) and 4:3 (standard def TV). It’s an extremely versatile solution … and also expensive and sometimes unnecessary, says Lance Anderson, president of Admit One Cinema, Edina, Minn. 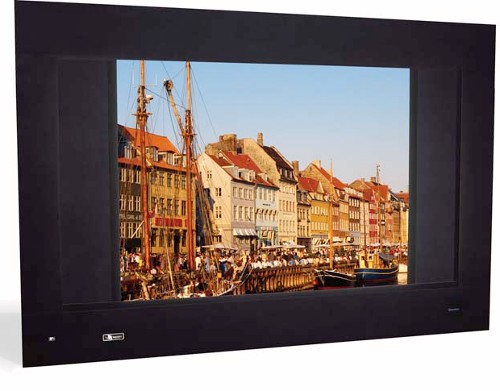 A Stewart Director’s Choice screen masked down to 4:3.

Many home theater designers also maximize the image with the use of an anamorphic lens to make sure every picture shape uses all the projector’s available pixels.

For many of Admit One’s home theater projects, the company recommends vertical masking instead of horizontal masking. Instead of the material extending and retracting from the top and bottom, it rolls down vertically from the top of the screen. Usually, this means only two different sizes of screen are possible (2.35:1 or 16:9), but given the fact that not much 4:3 material still exists, having only the 2.35:1 and 16:9 options will usually suffice.for most theater owners. Plus, it can cost significantly less than horizontal masking solutions. In one project, it saved the homeowners $7,000, says Anderson.

Here’s a video demonstrating how vertical masking turns a 2:35:1 screen into a 16:9 screen.