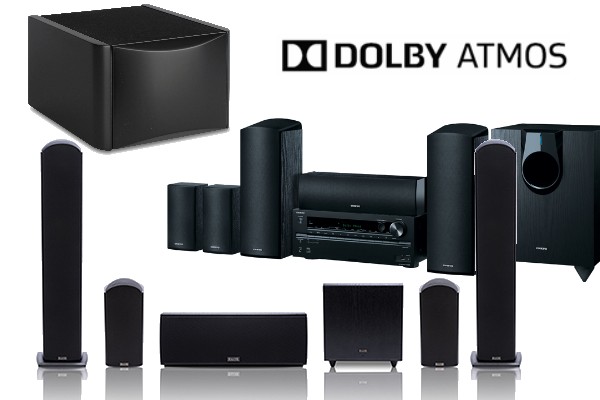 You used to set up a home theater with surround sound: 5.1 channels, then 7.1, and speakers played back audio signals assigned to each channel to approximate locations of sounds mixed for a movie soundtrack. That was then. Today, there’s object-based audio, which gives filmmakers the tools to determine exactly where a sound should be and where it should move — in three dimensions. As Dolby explains, moving a hummingbird’s sound from the left height channel to the right front channel “can’t possibly recreate the detail of that bird’s flight.” When those details are lost, the brain loses the sense that what it’s watching is real. Object-based audio faithfully recreates the hummingbird’s flight “in all its complexity,” says Dolby

That third dimension is delivered by height channels, which changes the number scheme for a home theater setup. A 5.1 system becomes 5.1.2 in Dolby Atmos, for example, or 5.1.4 if you add four height speakers, which Dolby recommends for full effect. What was once a 7.2-channel system with two subwoofers becomes 7.2.4 in Dolby Atmos. If you’re a Hollywood exec, you’d probably go all out with the max 24 main level speakers and 10 in the ceiling in your private screening room. Atmos automatically adapts the object audio to perform according to the number and placement of your speakers – whether it’s a 5.1.2 setup or 24 main speakers and 10 overheads.

You have three ways to create a Dolby Atmos speaker setup. If you have existing speakers in a surround sound configuration, you can add speakers that mount in or on the ceiling for the height dimension. Those speakers don’t have to be Atmos-designated. But if you’re unable to mount speakers in the ceiling, you need angled Dolby Atmos-enabled speaker modules that you place on or near existing floorstanding speakers. The Atmos-enabled speakers are specially configured so the speakers point up to create the height layer that’s part of an Atmos system. The third option, if you’re starting from scratch, is to choose integrated speakers that place upward-firing Dolby Atmos speakers atop conventional speakers in a single-cabinet design.

Following are some of the early Atmos-enabled speakers to hit the market.

The 44-DA uses Atlantic Technology’s vertically-firing Concentric Driver Array to deliver the height information of Dolby Atmos-encoded soundtracks. The 44-DA’s frequency response and radiation pattern have been engineered to meet Atmos requirements while leveraging the components used in Atlantic’s standard speakers including a 5 :¼-inch woofer, 1-inch silk-damped dome tweeter and optimized 1st-order Butterworth crossover. Atlantic designed the module to fit perfectly on top of its own THX-certified 4400LR speakers. But you can use them as standalone upfiring Dolby-enabled modules with any floorstanding speakers – placed next to the speakers or on a shelf. $499 each.

This is a complete Onkyo home theater package, offering the speakers and the electronics you need for a complete Dolby Atmos-enabled 5.1.2-channel system. The two front speakers each sport an upward angled speaker that’s housed in a sealed top section of the front-channel speaker cabinet. The angled speakers bounce discrete and separately coded sound effects off the ceiling, creating an overhead sonic plane in which sound moves around and above you in 3D sound space. Power is given as 115 watts into seven channels – including for the height speakers — plus 120 watts for the passive subwoofer. $899.

Pioneer Elite Dolby Atmos Home Theater Speakers, designed as a complete 5.1.4-channel Dolby Atmos speaker system, are the first cabinet speakers out of the lab of renowned speaker designer Andrew Jones in more than a decade. Engineered for an Atmos soundtrack, both the floorstanding ($699) and bookshelf surrounds ($749) house a vertically-firing concentric Dolby Atmos-enabled driver and a front-firing concentric driver. The bookshelf models have a single bass driver, and the towers have a trio each, with the two supplemental bass drivers providing extra bass extension and output. Because the floorstanding and bookshelf speakers were designed with nearly identical drivers, they have a consistent sonic signature that allows you to mix and match the speakers to fit your room. A center-channel speaker ($399) and 300-watt powered subwoofer ($599) round out the mix. Total $3,900.

Dolby Atmos isn’t the only 3D sound format out there. DTS just joined the fun with DTS:X.

Here are some top AV receivers to go with your Dolby Atmos speakers.