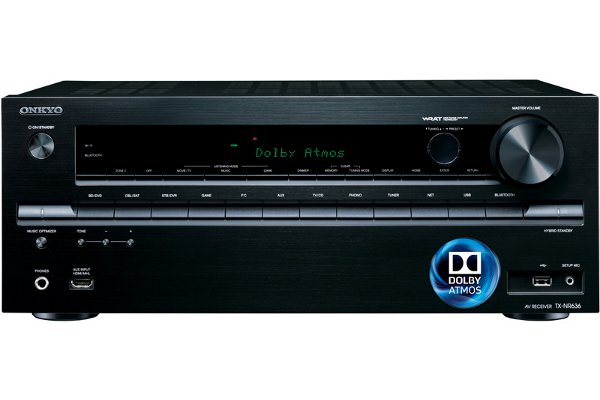 The momentum has been building for some time, and last fall Dolby and its partners unleashed Dolby Atmos for the home theater market, and since then products like this Onkyo receiver have arrived to bring object-based audio to our homes.

To put it in basic terms, Dolby’s Atmos format allows homeowners to listen to the same sound moviegoers hear at the cinema. Thankfully for homeowners, manufacturers like Onkyo and a handful of other A/V receiver and speaker makers recognize the potential impact of this technology and are offering it within a number of products, including Onkyo’s competitively priced, $699 TX-NR636 receiver that I set up in my media room for this review.

At the heart of its processing capabilities is a dual-DSP, 32-bit processing engine that helps to drive its Dolby and DTS decoders, as well as the company’s own DSP (digital signal processing) formats. Among the format options is the ability to run the Atmos technology through a firmware update.

On the Onkyo receiver’s rear panel are a host of inputs and outputs that include multiple HDMI 2.0 ports; coax and optical digital inputs; and RCA inputs that include a phono stage input. Other noteworthy items among the feature-rich TX-NR636 include a front-panel USB input, 24-bit/192kHz Burr-Brown DACs, wireless Bluetooth capabilities, 4K and 3D video compatibility, and video upscaling functions that are driven by Marvell Qdeo technologies.

Setup
First off, I estimate that installation took me approximately 45 minutes, and this includes the time I spent updating the firmware to run Atmos. On the physical side of the setup I connected my HD cable box, Apple TV and Integra Blu-ray player via AudioQuest HDMI cables, and my basic 5.1 speakers via AudioQuest speaker cables terminated with banana plugs.

To add a pair of Atlantic Technology DA-44 Dolby Atmos speakers, I ran a pair of Monster 16/2 cables with no termination to fit the tight space provided within the speakers. Interestingly, when it came to dialing the system in, I found the front panel’s menu to provide the fastest access to the setup menus.

Once in the menu I setup/renamed the inputs, speakers and video parameters, and tried the receiver’s auto EQ, which produced results that served as a starting point for my review. The last steps were to save my settings, verify my network connections and download and install the firmware update.

Performance
With everything set I watched a lot of TV and movie content from cable, Blu-ray and Netflix — highlighted by the first Blu-ray release with an Atmos soundtrack, Transformers: Age of Extinction — as well as NFL and NHL games, and streaming content such as Arrow and The 100. Initially I felt the receiver sounded a touch bright, but after about 50 hours I thought it warmed up, and after I made some adjustments to the sub level, crossover frequency and Atmos module levels I felt satisfied with the sound quality. My other initial reaction to the TX-NR636 was that it displayed a nice amount of real world power.

Spec sheets can be a difficult hurdle to overcome when talking to consumers unfamiliar with some of the marketing practices undertaken in the industry, but putting Onkyo’s specifications for the receiver aside, I found the receiver to be more than capable of filling small- and medium-size rooms with awe-inspiring Atmos, Dolby TrueHD and DTS-HD Master Audio sound.

Indeed, Transformers sounded particularly impressive with action like overhead planes and helicopters panning from side-to-side in space above and between the screen and seating area. Additionally, I found the Atmos processing delivered air and spaciousness to non-Atmos soundtracks formatted in DTS-HD Master Audio and Dolby TrueHD that aren’t normally a part of a typical home theater experience. On the video side, the TX-NR636’s switching worked quickly without any hiccups and the picture quality also looked fantastic.

The only area I found the TX-NR636 not quite on the same level as more expensive receivers or processor/amp combinations was its noise floor. Despite its real-world power, crisp articulation and big soundstage, I could hear a slight hum at times and that could obscure fine, low-level detail.

Conclusions
In addition to its state-of-the-art features that fit today’s digital A/V trends, this affordable Onkyo receiver includes networked options such as streaming media, multiple 2.2 HDCP compliant HDMI 2.0 inputs and other functions that can be utilized down the road.

When you add everything up — power, processing, video switching and cost — Onkyo has clearly hit all the right notes with the TX-NR636.

Verdict
Pros: Sets up quickly whether performed manually or through options like auto EQ technology; plenty of real-world power and decoding options; Dolby Atmos format is the real deal, and the TX-NR636 offers this technology at a reasonable price point.

Cons: Compromises to hit price point had to be made, unfortunately at expense of another couple of Atmos height channels; amplifier’s noise floor isn’t the blackest/most revealing.

Have suggestions or something you want to read about? Email Robert at rarcher@ehpub.com