It seems pretty clear, clear to me at least, that the future of flat panel TVs is going to be in 4K Ultra HD. Eventually that 4K resolution may be available in a variety of display technologies (LCD, OLED, projectors, maybe even plasma) but 4K it will be.

Last week local home theater pros Hi Fi House in Broomall, PA, opened up their doors to let me spend a few quality hours with the Sony XBR-84X900. They made sure the TV was hooked up to a Blu-ray player, HD cable box and a computer with Sony 4K video content, then handed me the remotes, turned down the lights and let me alone.

Like the LG 84LM9600 I reviewed a few weeks ago, this Sony is an 84-inch, edge-lit LED LCD TV with local dimming. In fact, it’s based on the same 3840 x 2160 resolution panel as the LG, but the similarities end with the glass. The image processing, menu, operation and performance is all Sony.

If you’ve used any Sony TV recently, then you’ll be familiar with the general operation of this set. The menu uses the company’s Xross media bar which places all the control and content options on a horizontal bar on the screen. You navigate left or right with the remote to get to the area you want, then go up or down to drill into the options. If you’re familiar with the PS3 game console, this will be easy to use. If you’re new to Sony’s system, it’s a bit easy to get lost. Luckily many of the selections use icons to help you find what you need (music note for the music menu, etc.).

If you dig a little deeper into the menu you’ll find what Sony calls the iManual. It’s an interactive menu with easy set-up tutorials. This is a nice feature if you’re simply getting your TV delivered, but not professionally integrated. Included in the iManual are sections to explain the remote and other features. If you are getting it professionally integrated, the TV includes RS232 and is Control4 certified. 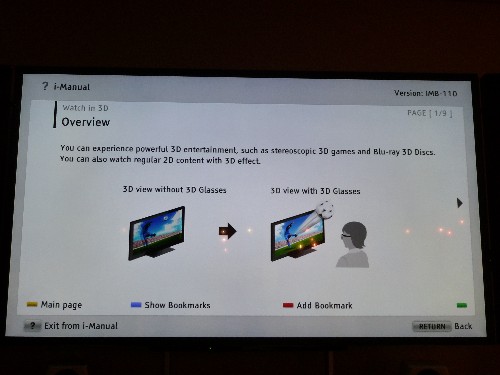 I was most interested in the picture settings, and there found the standard options. The TV started out in showroom mode (it was in a showroom after all), and I didn’t have calibration equipment with me, but was still able to adjust it to a very pleasing-picture. After a little tweaking with some test patterns, it was clear this TV was built with Sony’s best processing, what the company calls the 4K X-Reality Pro engine. Colors were bold without being over-saturated. Grayscale looked even across the board with no perceptible color shifts and smooth transitions from black to white.

As mentioned earlier, this TV has a kind of local dimming (true local dimming can only been done on full back-lit LED TVs, but some edge-lit TVs manage it). There are three settings for local dimming within the advanced video menu, and the maximum setting clearly worked best. While watching the Blu-ray Dark Knight Rises, during 2.35: 1 scenes (this movie has a variable aspect ratio which flips randomly from 16:9 to 2.35:1) the brightness from the viewing area would bloom into the top and bottom bars when dimming was turned off or down. With dimming fully engaged, the blooming was still present, but much less pronounced.

I viewed mostly standard HD (1080i, 720p and 1080p) content on the Sony, and in all the TV did an excellent job of scaling to the set’s native 4K resolution. Detail was always rich, and the TV’s very good black level made everything pop. The high resolution, even when not looking at native 4K material, creates a better fill ratio on the screen than a standard 1080p TV of similar size. This was apparent when I wandered over to a 90-inch Sharp 1080p TV in another part of the store. I’m not a neurologist or an ophthalmologist, so I can’t say with authority how small a pixel we’re able to perceive, but I believe the eye knows when something’s missing. More pixels on the screen and less space between them mean there’s more picture information for the brain. The result is a smoothness and depth that’s hard to quantify, but if you’ve sat in front of these TVs you know what you’re looking at. The perceived depth, which is helped by the contrast ratio as much as the resolution, was almost the best I’ve seen. 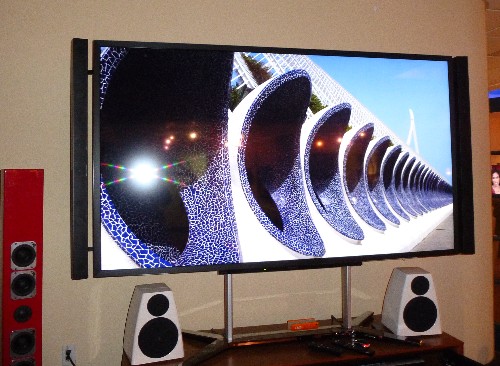 As I’ve said before in other articles, 3D on a 4K TV is also an improvement, but for a different reason. With 4K, you can have full 1080p for each eye without active glasses, which is why all the new 4K TVs uses passive, polarized glasses (the Film Pattern Retarder method first introduced by LG). On the Sony, 3D Blu-ray movies were excellent. I find the polarized glasses more comfortable both to wear and to look through. There was occasionally some shimmer on edges in the image and a little ghosting, especially around the microphone on the 3D Blu-ray of Goldberg Variations, but it wasn’t significant and was easy to dismiss. Some of this I think was the fault of the content and not the TV, because other 3D movies looked perfect.

While the TV was connected to a 4K content server supplied by Sony (which was actually just a Dell computer), it didn’t have the full suite of 4K content that buyers of the TV receive. Instead it contained a few music videos, including an unbearable Taylor Swift music video. As much as I hate that song, the picture was stunning. Note to Sony: The target market for this TV is probably not middle school girls, so maybe rethink your included content. 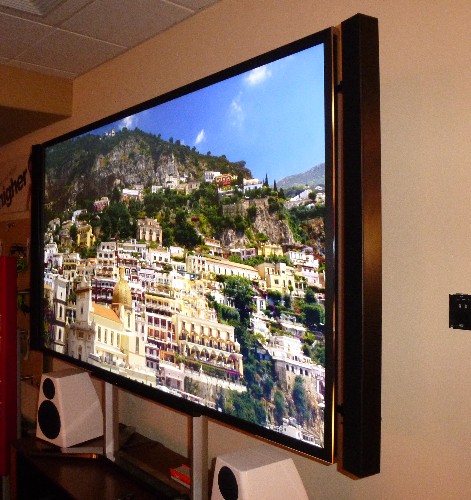 It’s also worth pointing out that the speakers on this TV—10 of them built into two left and right bars—sounded excellent. With this model, and the TVs which Sony unveiled earlier this month at CES, it’s clear the company wants to up the sound ante on built-in speakers. The speakers on the XBR-84X900 include four bass drivers, and the bass was impressive, with a wide overall soundstage and good detail. However, the speakers are removable, so if you’re going to make this part of a whole home theater room, you don’t have to leave those big things attached to the side.

After I was done fiddling with the TV I sat down with Hi Fi House president Jon Robbins. He says that for his customers, those looking for better-than-average products, 4K is the next sensible step in television. In fact, it’s not a demand for 4K content that’s sparking curiosity as much as the demand for good video processing. “We’re actually showing the TV more with cable and Blu-ray than we are the 4K content, because what it does for standard HD is astounding,” he says.

Related: What to Watch on a 4K TV.