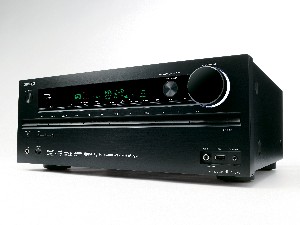 We used to call these things surround sound receivers or home theater receivers, but it seems that as the technology evolves the home theater is only a portion of what they’re all about.

The receiver is an essential part of any audio/video or home theater system, yet its basic functions (switching sources and piping audio signals out to your speakers) are increasingly getting boiled down to simpler products like soundbars. For people who choose the later solution in their homes, I want to make something very clear: you’re missing out. And all the fun packed in this Onkyo HT-RC370 is among the things you’re missing.

The HT-RC370 is a lot of receiver for under $1,000 ($849 to be exact). Its core audio features include 7.2 channel surround capability delivering 100 Watts per channel. It handles your input device switching with an amply-outfitted back panel complete with six HDMI inputs (even I don’t have six HDMI sources), two component, plus the other analog inputs you only use for a Wii console. Two optical and three coaxial, plus plain-old analog audio inputs handle the audio signals that don’t come from HDMI sources.

To drive those seven speaker channels the receiver uses Onkyo’s Wide Range Amplifier Technology (WRAT) and three-stage inverted Darlington circuitry, which among other things, helps limit distortion. The unit also uses Burr-Brown 192kHz/24-bit DACs to turn those audio bits into something your speakers can understand.

Oh, did I mention this model is THX Select2 Plus certified? No, well that’s important.

That about covers the basics, but it’s all the other goodies that make this receiver a multifunction multi-function.

First, the system is reasonably simple to calibrate. For a mid-priced model, I was surprised to find an Audyssey microphone and Audyssey MultEQ XT room correction. After I’d plugged in all my sources and the speaker wires, I hooked up the Audyssey mic and started the calibration routine. The receiver sent out a series of test tones (shhhh, be quiet while this is happening) to balance and adjust the speakers.

Overall setup was straightforward. You don’t need to be a home theater expert to plod your way through the various menus, but a little familiarly with terms will help you get the most out of it. Luckily the trickiest part for most novices, the speaker setup, is mostly automated via the Audyssey application.

After that, I went ahead and assigned names to the inputs then sat back to check out some content.

Opps, I forgot something—this receiver is also network ready for a host of streaming media.

On the back of the system there’s an Ethernet jack for a wired connection to your router. My unit also shipped with a USB Wi-Fi adaptor to go wireless (which was great because my router’s wired outputs are all taken).

It seems everything’s a streaming device these days—TVs, Blu-ray players, smart phones—but it makes sense to play your audio streams from your audio device, right? The HT-RC370 offers plenty in that category. It comes loaded with Pandora, Rhapsody, Napster, SiriusXM, Slacker, Mediafly, Spotify and vTuner (for 1,200+ internet radio stations). I love a receiver that has the sources already built in.

To access the streaming content, press the net button and an onscreen menu will display all the streaming services available. Most of them will require a one-time login, but vTuner lets you browse and listen immediately. While streaming music may have a bad rep among audiophiles, the Onkyo did a fantastic job of giving low-bitrate music depth and texture.

Other music too, sounded fantastic, including the tunes stored on a connected Autonomic Mirage MM5 server and CDs played from a Panasonic Blu-ray player. If you have music stored on a computer this receiver is DLNA certified to pull that music into it.

As with most AVRs at this level, you can use it to operate a second audio zone. This is done one of two ways. The easiest (depending on your point of view I guess) is to set up your main room as a 5.1 (or 5.2) system and run speaker wire from the remaining two channels to a nearby room. The other method is to connect an additional two-channel app to the zone 2 output and run speakers from the other amp. With option B you control the volume of the second zone with the two-channel amp (Proficient makes a cool product to hook up a second zone wirelessly). Zone controls are available both on the front of the receiver and on the remote. I know from taking to a lot of installers, that many people never take advantage of the second zone capability of their receivers, but I’d guess that receivers like this, which offer so much streaming audio content, make that option much more compelling.

Most of this talk so far has been about audio, but the HT-RC370 packs powerful video features as well. The most notable is the built-in Marvell Qdeo 4K video processor. Yes, this receiver will upscale your video to 4096 x 2160 resolution. That’s four times standard 1080p. Why would you want to do that? Right now, I’m not sure, because I didn’t see the benefit on the 60-inch 1080p LED LCD I was using, but 4K projectors are on their way (from both Sony and JVC), so Onkyo is just making sure this receiver is future ready.

Of course it also does mere mortal resolution scaling too. I played a variety of sources though it, and even bad TV was handled very well. It took some less-than-stellar DVDs and smoothed the sloppiness out of them.

Overall, I’m very impressed with how much Onkyo has been able to ram into a receiver that costs less than $1,000. A custom installation would really be able to take advantage of all this one has to offer, but any DIY enthusiast will also be able to explore its many features for both home theater and more.