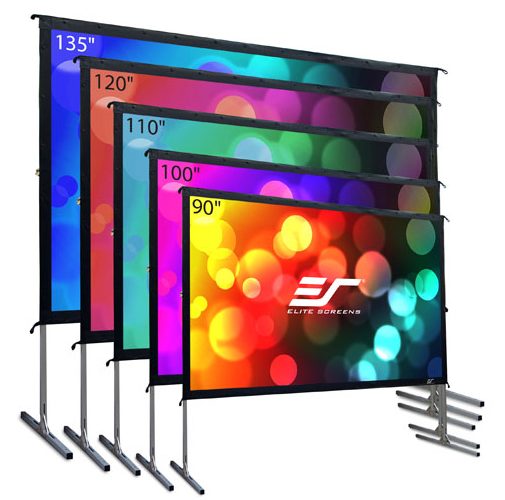 We’ve talked at length about the benefits of having an outdoor home theater. Just about everyone at: Electronic House has covered them in the past, both through product news and installation stories. I’ve even had the fortunate opportunity to experience: outdoor theater on a few occasions—just never in my own backyard.

That was about to change, thanks to the Elite Screens Yard Master 2 outdoor home theater screen. This is the type of screen that makes having an outdoor theater a no-brainer.

While having a super-cool outdoor amphitheater (like this one) would certainly make you the most popular person in town, this home theater screen makes it easy to throw up a ginormous, awesome image anywhere outdoors. The Yard Master 2 Series comes in sizes ranging from 90 to 135 inches, so you should be able to find something to fit your space.

Maybe if I had opted for the smaller size, I could have squeezed it into my house. (I was more than willing to move our: couch to the yard!) However, Elite was kind enough to send out the big boy, the 135-incher.: Technically, it’s designed for outdoor use, but you could use it inside if you have a really high ceiling. (The frame height on this one measures 95.3 inches, plus there’s another 23.2 inches from the bottom of the frame to the ground.) We don’t, so we had to limit: the action to the backyard.

For this review, I tested out the front-projection option, which is made of CineWhite material. The rear-projection version is a WraithVeil screen. The CineWhite is very heavy and strong, so it can be folded multiple times and you won’t have to worry about it. If it gets smudgy, it’s also easy to wash with soap and water. Just take special care in doing that, since you don’t want to rub the material too much.

Despite being a giant 16:9 screen, the Yard Master 2 Series comes nice and compact. It’s even easy to tote around, because everything is packaged in a carrying case. This makes the screen easy to store in the offseason or take over to a friends’ house. Oh sure, it’s a heavy carrying case, but it definitely makes getting the entire setup from point A to point B extremely simple. At 5-feet-2-inches (on a good day), I had no problem getting the case out of the box and out to the lawn.

Inside the bag, there’s an aluminum frame that’s easy to unfold. Once the pieces are out, just snap them into place, sort of like a folding table. Actually, I’ve had folding tables that were more difficult to set up than this thing. Once the frame is ready, push in the included legs and secure those with two knob screws. After that, you will also want to screw in the two eyebolts at the top of the screen. Those help to secure the screen to the ground, using the included rope. As an added security measure, there are also two stakes to secure the footing.

The most difficult part of the installation process is attaching the screen material. Basically it involves a lot of stretching and snapping. It’s not really difficult at all, but it did involve a little bit of muscle, so I enlisted my husband to help with the stretching part. When this thing is all folded up, it’s hard to imagine a good viewing experience, but that stretch is what makes the screen nice and smooth. Overall, the setup process: took maybe 30 minutes, but I don’t even think it was that long.

Once all of the pieces are in place, just pop the screen upright. Even totally assembled, it was incredibly easy for the two of us to move this 135-inch screen to find the perfect spot on the: lawn. That said, once we were finished with the movie night, I picked the entire thing up to move it all on my own. It’s that light. Also worth mentioning is that the front-projection system doesn’t take up a lot of space, leaving more yard room for neighbors and passersby.

After the screen was set up, it was time to pair it with the projector and a source. For this review, I used the Epson Home Cinema 730HD (which I will detail in another review) and my Panasonic Blu-ray player. Although it wasn’t like some of the professional outdoor systems we’ve featured here on Electronic House, my neighbors didn’t seem to mind.

We set everything up right before dusk, which seemed like a good idea. However, the remaining light made it a bit hard to complete the installation. It was very difficult to get a clear image, despite moving the projector closer to the screen. After some tweaking, the projector was positioned about 25 feet away. Once the sun went in, we probably could have moved everything further back. But really, why bother? The picture was absolutely phenomenal exactly where it was.

The front-projection CineWhite model has a gain of 1.1 and boasts a 180-degree viewing angle. As I moved around the yard, I noticed the image was bright from all of the seating areas and the colors were spot-on. And once we had darkness, nothing ever appeared washed out. We watched several selections from the Walt Disney Animation Studios Short Films Collection Blu-ray, which has shorts that showcase: a variety of different animation techniques. Each one was bursting with color and just a lot of fun to watch. Back to the Future looked equally as awesome, despite being a 30-year-old movie. The screen was smooth and delivered a perfect image. The black borders around the: screen also help to: make the image pop. Even my neighbors remarked how great it looked.

An outdoor theater is so much fun—and the Elite Screens Yard Master 2 outdoor home theater screen: makes it pretty easy: too. This lineup has both: rear- and front-projection options in a variety of sizes to accommodate almost any yard. And with prices ranging from $200 to $375 ($275 to $500 for rear projection), this lineup can accommodate any budget as well.