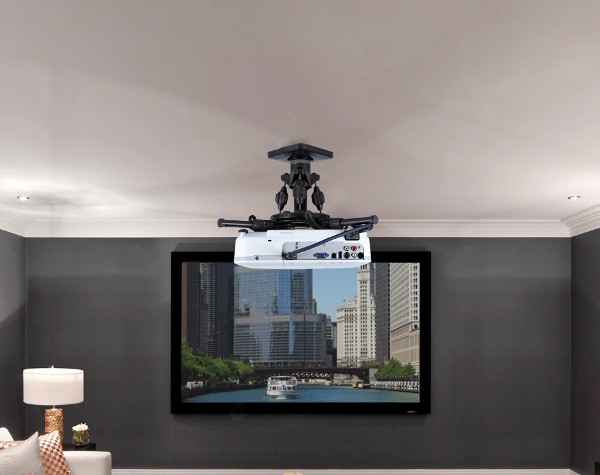 When building your home theater, whether it’s your first home theater, or your fifth, everyone thinks long and hard about the main components, especially about picking the best home theater projector, but the accessories are usually considered last. One of the most important home theater accessories, isn’t really accessory; it’s critical, and that’s the projector mount.

Getting the best projector mount takes more than just going onto Amazon and picking the cheapest. Yes, there actually are features to look for, and a quality projector mount can make home theater setup, particularly when it comes time to straighten, level and aligning your projector less complicated. And it goes without saying that a good mount makes hanging a ceiling projector easier and faster.

If you’re building a home theater or need to hang a projector in your media room, try one of these (remember, no mount fits all projectors, even if it says “universal”):

Sanus VMPR1
The Sanus VMPR1 projector mount tilts and swivels to allow some picture fine-tuning. It has independent roll, yaw and pitch adjustments, and a quick-release mechanism for when you need to take the projector down to change a lamp. The VMPR1 is made of heavy-duty steel and comes with an extension pipe for higher ceilings. $109 from Crutchfield.

Omnimount PJT40
This is a fairly new mount for Omnimount, and it’s currently the one used in the Electronic House review lab (my house). The PJT40 takes projectors up to 40 pounds and includes an ingenious MicroDial feature for fine tuning the pitch and roll alignments without tools. $159 from Best Buy.

Monoprice Projector Mount 6528
This Monoprice projector mount looks pretty bare bones compared to the other two, but it’s only $15. Yes, $15, and it’s made of steel to support a 50 pound projector. It has pitch and roll adjustments, but reviews on Monoprice’s web site say it may take some fiddling to get the alignment right. Also, some users have noted that it’s not an easy fit for projectors with only three mounting holes. But $15.