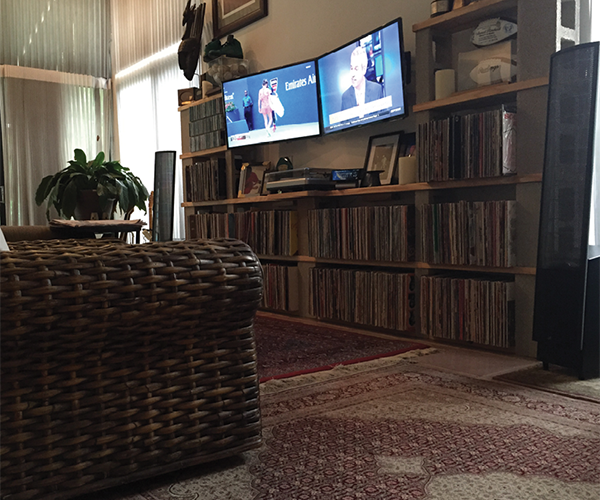 Former professional football player and notable sportscaster, Ahmad Rashad, can’t help but analyze and critique every play on the field. It’s in his blood—so much so that he created a special spot in his home for just that purpose. Two 46-inch Samsung TVs mounted side by side, and a slick RTI control system let Rashad scour multiple matchups at once. He just grabs the iPad that rests on a table next to one of the two chairs, taps a few buttons to access a sportscast from any of several DirecTV receivers, and lets the RTI processor and amplifier do the rest.

The overall aesthetic of the room was as important to Rashad as the dual-screen setup . “He requested that the room evoke the same feel as his college dorm room had,” says Anthony Petrone, whose Wellington, Fla.-based company, Petrone Technology Group, was hired to recreate this vibe with a decidedly high-tech twist. Cinder blocks would support simple wood shelving to hold Rashad’s impressive collection of vinyl—exactly as Rashad had done in his college dorm room, except for a slight difference. Petrone shored up the shelving arrangement by fastening it to the wall and incorporated Rashad’s existing turntable into its design. Another big improvement over the dorm-room audio delivery: Today, Rashad’s audio system pipes through high-end, reference-grade Martin-Logan ESL speakers, which are manufactured specifically for two-channel music listening. In addition to vinyl albums, most of which date back to—you guessed it—Rashad’s college days, Sirius XM, Pandora, and other music services can be streamed through the system. With such a wide variety of formats and genres, music pervades even while Rashad is engrossed in a game on the two TVs, and can be shared with other speakers in his home at the touch of a button in the iPad.

And those two old-fashioned rattan chairs? Although fairly basic, they were purchased by Rashad with his first paycheck as a professional football player. They’re just part of the nostalgia that makes this outwardly simple space so special to the gridiron legend. EH