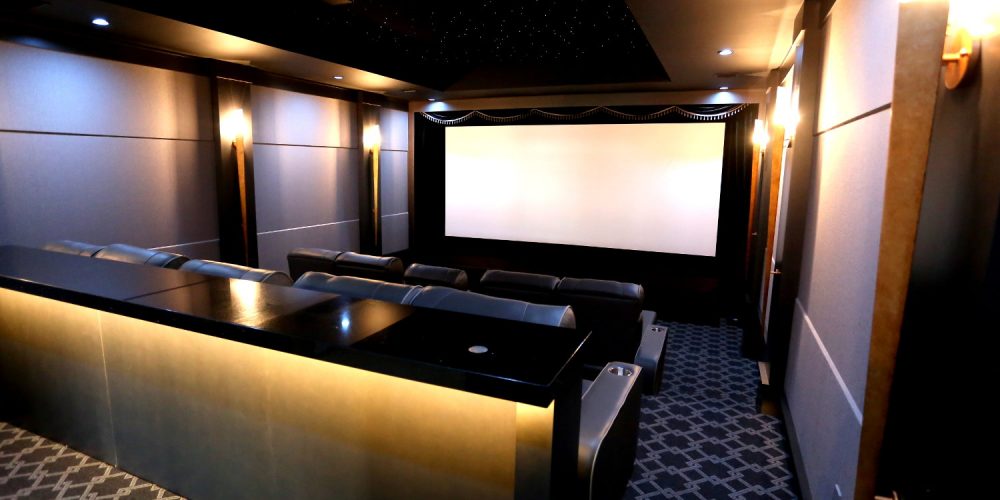 This project—two theaters from two clients who live right next door to each other—started three years ago. Both clients are friends and movie lovers, watching flicks several times a week. While the two theaters look different—one has a grey and black interior, the other uses an orange and red color scheme—the core technology is nearly identical. “Some clients don’t even go into their home theaters once a month, but these guys love movies, and that made this a very special and passionate project for us,” says Ram Ragulan, owner of Astrum Entertainment Group, of Ridgewood, N.J.

Related: Check out this award-winning home theater from the Electronic House Home of the Year Contest

When considering what tech would go into the theaters, a Meridian regional sales manager told Ragulan about how the company is now using Display Technologies screens for a special theater where they stack nine to 12 Meridian loudspeakers behind a screen. They call it a Tri-Stack system. The acoustically transparent screen allows loudspeakers to be positioned behind the screen without any compromise in audio reproduction. 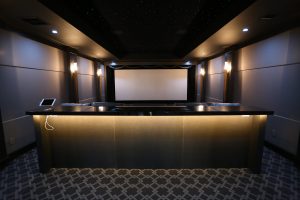 “We flew with the two clients—both who drive Range Rovers and love the Meridian systems in their cars—to Michigan to hear a live demo of the Meridian DSP640 loudspeakers. They loved the way it sounded, but both wanted more power. That’s when Meridian recommended the Tri-Stack system.”

Stacked Speakers Behind the Screen

The Meridian Tri-Stack arrangement in both home theaters consists of nine DSP520 in-wall Meridian loudspeakers. Each left, center, and right channel has three loudspeakers stacked up in a column in a wall specially built by Astrum to go behind the 14-foot 2.35:1 Display Technologies screen. The wall is four inches deep, and all nine loudspeakers come with their own backboxes, so Ragulan and his team were able to mount them in the wall and put the screen directly in front of it. 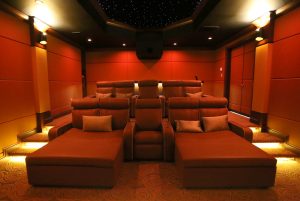 “The Display Technologies Screen has one of the very best black levels, which gives an amazing depth to the image. We were able to put all the loudspeakers behind the screen with zero loss of sound, thanks to the special woven screen, and installation was easy because of the way the screen material stretches, tucks and untucks. To access the loudspeakers, we can take screen material from the front instead of un-mounting it, which is very convenient.”

While the images are stellar, the highlight of both theaters is the audio. Ragulan took advantage of the complimentary Meridian Design & Specification Service, and Meridian came to the site more than 10 times to make sure the project was on track, taking a special interest in how the Tri-Stack system works.

“The staging of the front was elevated to a sweet spot in the center row, with the third row being a bench with a bar. We’ve done quite a few Meridian theaters, but this one is the best.” Complementing the nine DSP520 in-wall loudspeakers are two subwoofers located in the front stage, giving the room plenty of bass response to complement the Meridian Tri-Stack system.

Thanks to their DSP design, no external amp was required, as the DSP520s are an all-digital design with amps built in to each speaker. “From the cost side of things, doing a system like this versus traditional loudspeakers is a wash,” says Ragulan. “Because with a traditional system you have to buy conventional speakers and spend money on amplifiers. Meridian’s built-in amplifiers simplify everything, and it’s also the best approach using the Meridian DSP technology to elevate the soundstage. We can bring it to whatever the client wants it to be. That’s normally not easy to do unless you purchase a very expensive audio processor.”

As far as the sound goes, the clients are just as impressed as Ragulan. They feel like even though the power is present, it’s subtle and neutral, and never overwhelming, even at high decibels. “The advantage of the Tri-Stack system is that there is more power to the front stage, and also more isolation when the sound moves smoothly between the left and right side of the screen. The vocal clarity is the best I’ve ever heard. The soundstage is also big, which would not have been able to be accomplished without a coning effect from traditional speakers and amplifiers,” says Ragulan. “It’s the first time I’ve experienced a sound like this in 20 years being in this industry.”