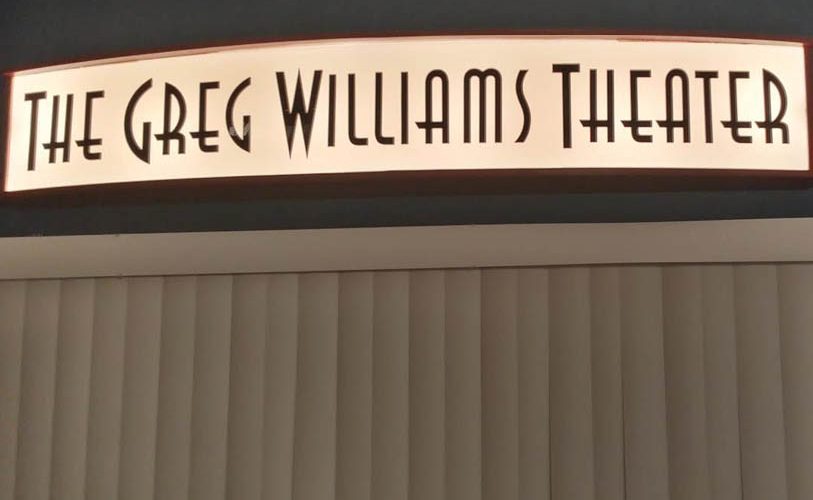 If you walked into a theater room and saw a marquee that read, “Greg Williams Theater,” you’d think that Greg was a pretty lucky guy. Well, he was. That’s because he had a friend like Ed Zarick.

Ed dedicated his theater room to his childhood friend and cousin, who passed away about 15 years ago. “I remember first watching movies like Gladiator, Saving Private Ryan, and Braveheart, all with him. This is when I first started watching movies, period,” Ed says. “It felt only right to dedicate this theater to him. The name sounded unique, classy, and has meaning.”

And it’s a great legacy. What was once Ed’s living room now has elevated seats, a 12-foot screen, and a popcorn machine. However, it’s not just the fact that Ed named this room for his buddy; it’s how he completed it. Ed is one crafty DIYer. “It’s more of a bigger home project I tackled with lots of little projects involved,” he says.

One of these projects included getting rid of the window next to the TV. The screen he had planned to use was about 12 feet wide, so between that and the on-wall speakers purchased for the room, there wasn’t a whole lot of space to spare. While some DIYers would solve the problem by going with a smaller screen, the 12-footer was non-negotiable for Ed. That’s because he got his screen for free.

“I received a 12-foot, 4:3 motorized Da-Lite screen for free that was ripped along the bottom edge,” Ed says. “But if I made it into a 16:9 screen, then the rip wouldn’t be in the viewing area.”

The rip didn’t interfere with Ed’s plans, although he did find smoothing the screen fabric to be one of his toughest challenges. Making it fit into the room was no problem, either. He just needed to cover up the window with drywall and add texture to match the rest of the surface. The screen is paired with a Mitsubishi WL7200U LCD projector, which sits on a balcony that overlooks the room.

“It’s only 720p, but with my budget, I chose brightness over resolution due to the fact there are windows in the room, so there is sun. But it is bright enough to see during the day,” Ed says. “I also got a discount on this since Mitsubishi is getting out of the projector business (from what I was told) and got this as a manufacturer refurb for under $1,000!”

Now that the projector and screen were in place, Ed just needed to position himself, so he built an elevated seating platform. “We may have gone overboard on the wood we used, but I wanted it straight and sturdy—so better safe than sorry,” Ed says. “We used four 12-foot 12-by-2s to make the platform. Then, used some plywood for the top and made a simple step up on one side. To make it carpeted, we simply cut the carpet out from underneath it and re-laid it down on top of the platform. This worked for both the platform and the step.”

Ed finished off his work with LED lights to give the room more of a theater-feel, as well as to keep from missing the step in the dark. A few of the other decorative elements in the room include lights that Ed made with CNC and laser cutting machinery that he owns, as well as a variety of metal decorations and artwork that he found discounted at his local Hobby Lobby.

Between previously owned furniture, discounts, and other craftiness, Ed spent less than $2,500 on this entire setup, which includes the projector. Other features include an Onkyo HT-R330 5.1 audio system, Blu-ray Disc player, and the popcorn machine. He may upgrade later—to a bigger popcorn machine. He says that new equipment may come at some point as well but, for now, he’s extremely happy with how the theater performs and pays homage to his friend through all the movies they had once enjoyed together. EH

Click here for an inside look at Ed Zarick’s theater.