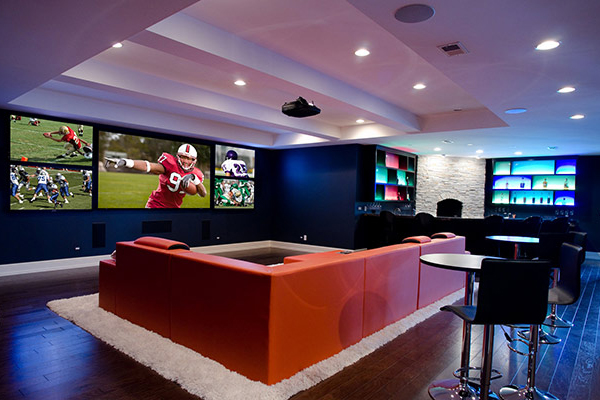 Like a black hole, but without the nefarious connotations, this unusual and eye-catching 400-square-foot home theater draws the homeowners in for countless hours of high-style, high-tech entertainment. Along those lines, the visually interesting and innovative “vortex” ceiling served as inspiration for the entire theater.

After discovering work by Brooklyn, N.Y.-based NYCeiling in a magazine, the homeowner wanted to accomplish something just as exciting in his own unfinished basement remodel. The custom electronics (CE) professionals at MediaTech: in St. Charles, Ill., worked with NYCeiling and interior design firm Oak Valley Design to achieve a unique effect, installing LED rope ceiling lights, giving it the chameleon-like ability to change color at the homeowner’s whim. In conjunction with the pattern on the exceptionally large 11-foot stretched-fabric ceiling, the lighting produces a mesmerizing 3D effect and serves as the room’s focal point.

“This project was both fun and challenging because we had never worked with a stretched-fabric ceiling or used RGB rope lighting,” says a MediaTech spokesperson. “While the owner had a vision for the ceiling, he gave us and the designers a blank canvas. The theater grew organically from there into what is now a unique space.”

Elements of the rope and ceiling lights are applied elsewhere in the room, like on the series of stretched-fabric LED backlit light boxes, also designed by NYCeiling, with lighting work by MediaTech. Oak Valley Design installed individual leather squares on the side walls to mimic the pattern on the ceiling lights and reflect the LED light color, giving the theater a cohesive appearance that is only interrupted by the tomato red Acoustic Innovations theater seating—a sort of nod to the movie palaces of yesteryear.

MediaTech also surrounded the 145-inch Stewart Filmscreen screen with the soft glow of LED light to complete the effect. An Epson 6010 projector provides a bright image for less money, while a 7.2-channel Bowers & Wilkins: surround-sound system immerses the audience in the onscreen action. Despite its stunning good looks, when the theater is activated, it’s the A/V that becomes the real star of the show.

AMX: control is the foundation of the home theater and the entire home, including the Enova DGX AV Matrix system. AMX control allows the homeowners to operate the lights, climate, CCTV cameras, A/V, and more. In addition to centralized control, MediaTech’s Capture and Play technology lets the homeowners customize all of the connected subsystems to their liking, then save them to be re-created at any time at the touch of a single button. It’s like taking a snapshot of your home systems, without the need for complex programming or a service call.