If you’re in the market for a new home theater projector, you’re going to need to learn a little about light. That’s because the light sources we’ve become accustomed to using in home theater projectors—big hot lamps, are going away. They’re being replaced by LEDs and Lasers. Yup, lasers.

At this year’s CEDIA Expo, the projector spotlight was on new models using LEDs and lasers instead of traditional lamps. Sony, Epson, Digital Projector, SIM2 and Christie all showed impressive new projectors using these technologies. They range in price from the fairly affordable to the “oh, wow.”

In addition to laser and LEDs, 4K resolution was also touted by several companies, but resolution wasn’t the main story for these projectors.

First, why the new light sources? Traditional home theater projector lamps run hot, then die. They often require noisy fans to keep them from melting the projector’s innards, and they last only a few thousand hours. If you use your projector a lot, you could end up spending $300 or $400 every couple of years for new lamps.

Both LEDs and lasers last forever—well, not really forever, but 20,000 hours is about right for most (some claim a lot more than that), and you’re more likely to replace your projector before the light source runs down. 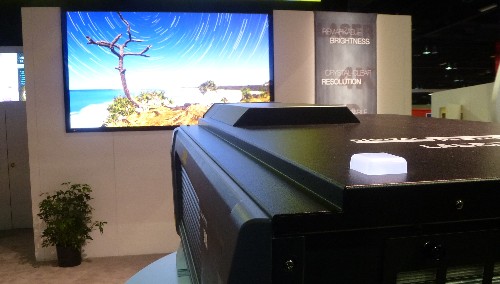 The Digital Projection Insight 4K Laser made an image bright enough to work in the brightly lit expo hall.

Most of the laser projector use what’s known as a hybrid system that combines blue lasers and a phosphor wheel with color filters.

More info for your next home theater:
Almost Everything You Need to Know About Ultra HD 4K TVs
7 Blu-ray Players for Your 4K Home Theater
BenQ Puts MHL into New Home Theater Projectors