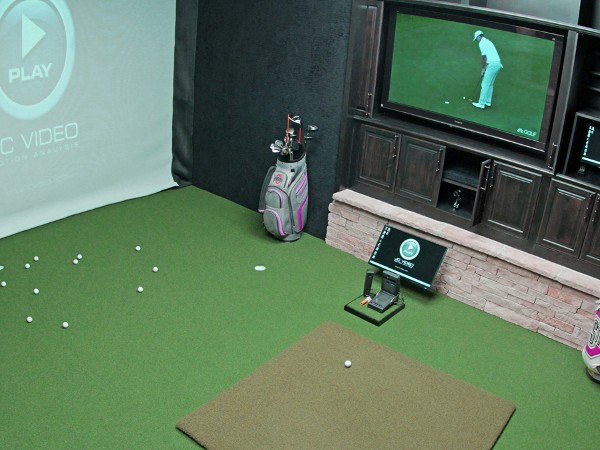 IMAGINE DRIVING BALLS on some of the most famous courses in the world or comparing your swing to masters like Tiger Woods, all without ever leaving home. That’s what this homeowner does nearly every day, marrying his love of golf with music and movies via a complete basement remodel that transformed an unwelcoming space into a handsome, comfortable, and high-tech atmosphere designed by Choose AV and Security, of Wichita, Kan.

“Not only was the ceiling height not tall enough to swing a golf club, but there was a structural beam spanning the entire room,” says Jamie Weidman, COO of Choose AV. To give the homeowners enough headroom to fully swing their clubs, GLMV Architecture, of Wichita, Kan., calculated the amount of space needed in the area and the builders excavated the concrete floor by three feet. This was no easy feat, considering they had to hand-dig most of the floor and wheelbarrow the concrete out of the home. To free up more space, the teams also replaced the header with a steel beam recessed into the ceiling. Once these structural alterations were made, the room measured 12x17x11 feet, and Choose AV was now able to install the high-end golf system. Also incorporated into the space is an observation deck where spectators can relax and enjoy a glass of wine from the custom-designed wine room while watching a 65-inch Panasonic TV or listening to music.

Up a few stairs from the sunken golf area is a main media space (15x16x8 feet), which features a JVC projector and a 110-inch Screen Innovations Black Diamond motorized screen that Weidman chose for both its ambient-light rejecting capabilities and its tensioned wire mounting system. “The mounting system plays to the openness of the room, allowing more of the gorgeous stonework behind the screen to show,” says Weidman. Even though this media room is in the basement, there are still windows with which to contend. Motorized blackout shades from QMotion darken the room on a sunny day, boosting picture quality.

Analyze Your Swing with Technology
The JC Video swing analysis digital mirror software gives the homeowner instant visual feedback on his swing via two hidden high-speed cameras and a sensor placed directly onto the face of the golf club. Not only can he view his swing plane, but he can then compare it to the swing of professional players. When his swing gets dialed in, he can play a round or two on one of many PGA courses via the Foresight system. “Hitting (virtual) balls into a 9×12-foot screen makes you feel as if you were actually there,” says Jamie Weidman, COO of Wichita, Kan.-based home systems integration firm Choose AV. “You get stats on the impact of the club, whether your swing is open or closed, the angle coming into the ball, how fast you’re swinging the club, and even the revolution on the ball.” A mic on the floor picks up the sound of impact.

Complementing the video system is a 7.1-channel Definitive Technology Reference Series speaker system featuring Wave Launch technology, a technology that creates the audio illusion that in-ceiling speakers are positioned in front of, not above, the audience.

The homeowners can control all of the basement technology easily, thanks to Choose AV’s incorporation of a Control4 home automation system. Signals issued from any of the basement’s three Control4 wall-mounted keypads, a Control4 handheld remote, or a Control4 app on an iPad or iPhone, are translated into commands by a Control4 processor. This processor sets up the lights, motorized shades, surround-sound system, and screen (it drops down from a hiding spot in the ceiling) for movie watching, golf practice, or just relaxing. When the family is finished with a movie, they can tap a Night button to shut down the A/V system and temporarily brighten the lights (the lights turn off completely five minutes later).

While the basement overhaul was extensive, the construction was completed entirely while the homeowners were away at their second home. Choose AV gave them the capability to keep an eye on the remodeling process remotely via a web camera. Now that the homeowner has this great golf escape space, he’s spending more time than ever in the basement. But when the PGA Tour is only a finger-swipe away, who can blame him?