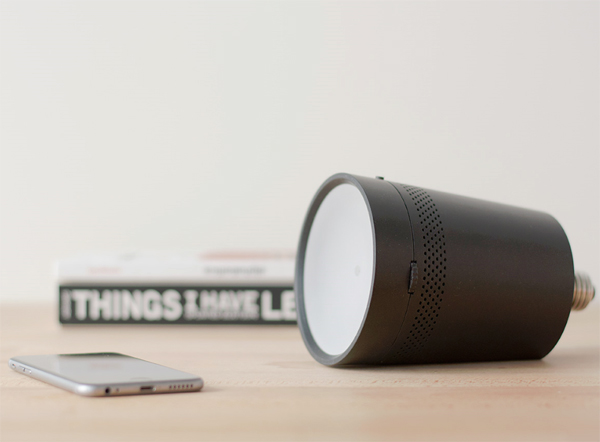 We try to give you all sorts of home theater ideas for smaller spaces. However, some spaces are so teeny, making it almost impossible to cram a home theater screen in, let alone a projector.

A company named Beam Labs says that it’s easy to turn any flat surface into a big screen, when it’s paired with the Beam smart home theater projector.

The Beam certainly isn’t the best home theater projector (854 x 480 resolution), but it’s certainly one of the smallest that we’ve seen. It’s also the only one we’ve ever seen that can screw into a light socket. Why would you want to do that exactly? Well, that’s how the Beam gets its power.

If you don’t have a socket to spare (or don’t want to project images at that angle), Beam also comes with a power cable, so it can be placed on a flat surface. Once the Beam has power, it can be controlled via the Beam iOS/Android app.

Inside, the Beam has a computer that’s running the Android OS, so you can play games, watch movies or share content from your smartphone or tablet. It can also project recipes in the kitchen, stream music through its internal speakers, and deliver presentations at work. It even supports IFTTT (If This Then That), so you can set the Beam to wake you up in the morning or flash a few updates from social media when you get home after a long day.

Other features include a 1.4GHz dual-core processor, 100 lumens of brightness, Bluetooth 4.0 and WiFi support, and 8GB of storage. It’s absolutely a little gimmicky, but this pint-sized projector still promises to deliver images up to 120 inches pretty much wherever you want them.

Currently, Beam Labs is seeking funding for this home theater projector on Kickstarter. At last peek, the company had more than doubled its goal with another 27 days to go on the campaign. If you want to secure your Beam, you’ll need to pledge a minimum of $399. Backers can then expect to receive the first round of products sometime in October 2015.