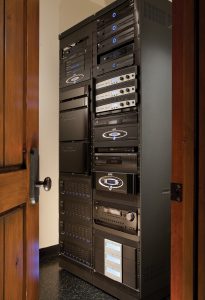 The old adage, “If you want something done right, do it yourself,” couldn’t be further from the truth in the world of home audio and video. In fact, the converse is true: If you want something done right, hire an A/V specialist who has the skills and experience to save you time, money, and headaches, by planning a high-tech space the correct way, from the blueprint stages.

Nowhere is this better illustrated than in this 620-square-foot basement home theater, which resulted from a massive remodel executed by Synergy Audio Video, Tustin, Calif., in a roughly 10,000-square-foot estate. When Synergy was brought onto the project, it was apparent that the partially finished basement theater, which had been drafted up by the home’s original designers, was not the optimal layout for sound and video and would have to be gutted and rebuilt.

“The homeowner had purchased the home, which was all prewired, but there was no equipment in it,” says Steve Gorton, owner of Synergy Audio Video. “We executed the Savant whole-house control and distributed A/V system and that led to the theater which, at the time, was a big empty basement that was planned for a theater, just not planned very well. This happens quite often when a house is built and the A/V contractors are not brought on at the early stages.”

The most obvious issue was that the spacing of the floor risers wouldn’t be able to accommodate a proper seating layout. “There simply wasn’t enough space between the risers for reclining theater chairs, and there wasn’t enough riser height to allow for proper, unobstructed line-of-sight viewing to the screen,” says Gorton. He and his team had no choice but to tear down the risers—which, incidentally had not been wired for pathway lighting—and start anew. This time they made sure to include proper wiring for LED lighting in the steps, and they built wider, higher rows.

The Synergy team also tore down the ceiling, which had been constructed only of drywall with nothing else to buffer the sound transmission from the basement theater to the kitchen above. “Without additional sound dampening treatment, audio and bass from the theater would have been annoying to those in the floors above,” says Gorton. To fix the situation, Synergy installed QuietRock insulation and boxed out all the lights so they wouldn’t resonate when the volume is cranked. Because the existing theater wiring was insufficient, Synergy also had to completely rewire the theater and then redo the lighting, updating it to integrate with a Savant automation system.

One interesting feature in this basement renovation is that the homeowner wanted to add lighting behind the 110-inch Stewart Filmscreen CineCurve Microperf Screen. When the light fixtures are activated, three of the dramatic Pro Audio speakers positioned behind the screen become visible, allowing the homeowner to show off his prized speaker system, which totals nine Pro Audio speakers and two subwoofers.

“We do this type of setup in our showroom, but this was the first time we did it for a customer,” says Gorton.

Placing speakers behind an acoustically transparent screen would seem like a quick, easy way to conserve floor space, but Gorton says it’s a solution that involved careful planning to do it right. “Not everyone knows that if you put the speakers behind the screen, you need to put an air gap between the speaker and the screen for optimal sound. This eats into the shell of the room, of course, and not all builders realize that this space needs to be accounted for.” In this project, having an A/V specialist involved in the build-out of a home theater ensured that the proper amount space was worked into the plans.

Generally speaking, Synergy’s philosophy is to eliminate challenges by good planning. “Our industry doesn’t do that great of a job documenting work,” says Gorton. “We have learned how important this is over the years and have everything drawn up on paper before it is constructed. We then prebuild systems before they go onsite and test them in our shop.” While this might sound like a cookie-cutter endeavor, each Synergy theater is completely unique, with the company working directly with the homeowner’s interior designers and builders to customize layout as well as aesthetic details. EH