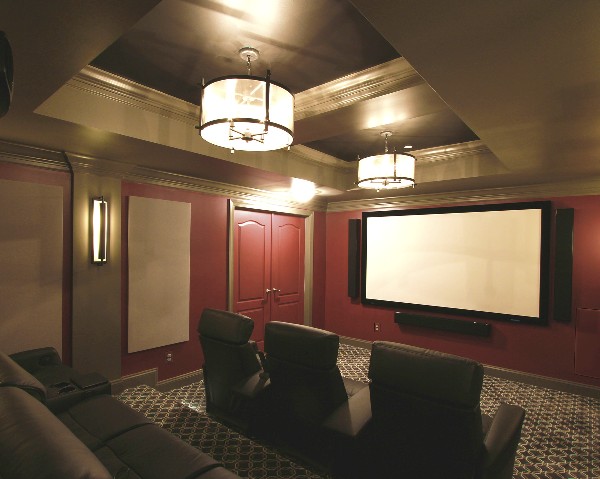 TRADITIONAL OR MODERN? Ornate trim or clean lines? Basic or sophisticated? These are some of the questions many people grapple with when designing a dedicated home theater space.

But there’s one decision that came easily to Rhett and Nina Hunter. They knew their new home theater would be state of the art. As someone who keeps up with the latest technology and keeps himself informed of its advances, Rhett did not want to create a space that would quickly become outdated. The latest exciting audio/video technologies, therefore, would be incorporated, but as for the style of the space, they stuck with the classic look of an old-time, burgundy-colored theater.

Maryland-based home systems integration company Gramophone was hired to meld an assortment of sophisticated technology with a traditional design in a 12.5×17.5-foot space. A 4K Sony projector delivers video in 4,096×2,160 pixels of eye-popping (4K) resolution on a 100-inch fixed screen. The Stewart Filmscreen display is married to appropriately punchy Totem Acoustics Tribe Series on-wall and in-wall speakers and subwoofers. “He wanted to have a really quality audio system, and have some of it visible” says Gramophone sales manager Josh Shobe. “The Totem Tribe V on-wall speaker for this theater has a size that accommodates the look of the 4K and has an output level to give that punch you would look for in main floorstanding speaker.” Four Tribe Series in-wall speakers were fitted into the bays behind the acoustical treatments on the side walls and in the columns in the rear, for a 7.2-channel configuration, with the two in-wall subwoofers placed at the front right and rear left of the room.

But this impressive audio setup is just the beginning. Gramophone wired the theater to support another latest and greatest A/V innovation: Dolby Atmos sound, which would introduce four additional in-ceiling speakers for height effects like rain and flying airplanes overhead. It’s a modern match to the ceiling boxes with their clean-lined crown moldings and contempo/traditional Zuo Modern lights.

For the projector, the owners went with Sony’s mid-level VPL-VW600ES 4K SXRD, with most of the features of its bigger brother but not the full-out brightness. It’s paired with Sony’s FMP-X1 4K media server. This component provides access to Sony’s online library of Ultra HD content. The projector also runs HDMI to an Integra pre-amp in a nearby equipment closet, in which an Oppo Digital Blu-ray player with Netflix streaming is also located. To ensure that all of this online content gets to where it needs to go, the A/V system is supported by an enterprise-grade Pakedge network.

Memory Foam on Steroids
He likes to sit in the front, she in the back. Rhett and Nina Hunter had originally wanted three seats at the back of their new theater, like a sofa, and two seats in front, like a loveseat. The home systems integrators at Gramophone, of Timonium, Md., opted for IMG Monza motorized reclining home theater chairs: fitting three in the front and five in back. The three in the rear row form a sofa.
The IMG chairs are from a company in Norway and have a contemporary, Scandinavian design, according to Gramophone interior designer Bethany Johnson. They’re leather and have a “memory foam on steroids,” made for long-term seating comfort and ergonomics, she says.

All of this technology and access to a huge library of content would require something smarter than a traditional handheld remote to manage. The solution was a Savant control system that was programmed by Gramophone to minimize the amount of button pressing required to fire up the home theater equipment. Today, the owners use a Savant Universal Remote 500 to control the gear. It functions flawlessly, but in order to stay current, the owners plan to soon transition to an app-based form of control. Instead of grabbing a traditional remote, they’ll be swiping the screen of an iPad to manage the theater. They’ll also be programming some of their own commands.

No theater is complete without lighting, and in this space light fixtures from Zuo Modern and sconces from Murray Feiss maintain the meld of traditional and modern designs. Both lighting styles are aptly controlled by a Lutron Grafik Eye system, which is hidden in a closet with the rest of the gear in an equipment rack behind the screen wall. The homeowners interact with the lights by tapping buttons on a Lutron keypad that’s mounted just outside the theater room.