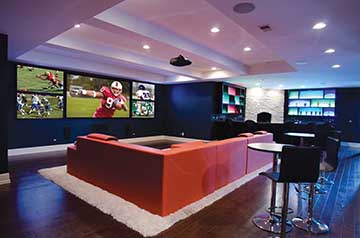 When it comes to home theater, trends can be a bit of a slippery slope. The time period and the technology typically call the shots. However, these things can pass as quickly as the pet rock fad. To keep your home theater from becoming outdated before the end of your coming attractions reel, you should : consider trends that may take a long time to go out of style.

Today’s hot home theater trends include huge screens, multiple displays, multitasking rooms, and hidden equipment. How can you go wrong with something in that lineup? Let’s take a closer peek at some of the current home theater design trends.

Several Screens. While some home enthusiasts want to focus on one really good (or really big) screen, others like to have options. This could mean that you have an HDTV for daytime viewing, with the ability to have a larger projection screen descend from the ceiling for nighttime movies and sport:¬ing events. It could also mean using the split-screen feature on a big HDTV, which many sets offer as an option these days. This allows you to use one side of the big screen for watching sports and the other for scouring the web for stats and other info. Others prefer to have multiple screens on at all times. This is where a video wall could come in handy. The video wall solutions available to home:¬owners today are slick, stunning, and simple to operate. Plus, they’re able to support applications beyond traditional home entertainment, providing enough viewing options to satisfy your entire family.

As with any cutting-edge technology, multi-screen video wall systems aren’t cheap, ranging from around $4,000 to $20,000 or more. However, they’ll take your entertainment enjoyment to a whole new level, where you’ll be able to watch the news, stock reports, and the big game all at the same time. Or, you might use a system to keep an eye on the baby, the front door, and The Weather Channel while you watch a movie. Avid gamers will relish the ability to play head-to-head in the same room, each on his or her own screen, and still see what’s trending on Twitter. It’s the ultimate entertainment experience that lets you take full advantage of the amazing assortment of viewing options available today.

There are two basic methods of setting up a video wall system. The first is by arranging multiple individual displays together on a wall surface; the second is by dividing one big screen (usually a pro:¬jection screen, although big-screen TVs are possible too) into individual viewing windows, also called tiles or quadrants. Each solution will require the addition of sophisticated audio/video switchers, pro:¬cessors, a custom-programmed remote control—and, of course, your choice A/V components, such as cable and satellite receivers, media servers, computers, Blu-ray players, and surveillance cameras (eight sources is typically the max). These media sources connect to the switchers and processors that, in turn, direct each stream of video to a particular display or quadrant on a big screen and scale each image to fit perfectly into the allotted space.

In addition delivering a variety of content to your family room, a video wall system gives you the freedom to alter the viewing arrangement on a whim. For example, with a custom-programmed tablet or touchscreen, you can quickly move ESPN programming from the far left display to the big:¬gest screen in the middle when the sports action gets intense, or expand a window on the projection screen for closer look at the kids, captured by a video camera aimed at the back yard.

Directing multiple streams of video to various screens and windows raises the risk of being extremely complicated and confusing. However, most systems account for this by providing customizable software that a professional home systems integrator can use to create a navigation menu that makes the process simple and straightforward. A menu that’s commonly utilized by professional integrators would display on a tablet or touchscreen a graphical replica of the actual video wall. Just touch a particular screen on the menu and drag the icon of the component you’d like it to display and voilÃƒ: — that image appears on the appropriate screen or quadrant of the video wall. The remainder of the screens and quadrants are set up in a similar manner. The menu also allows users to choose the audio they’d like to hear, be it from the largest screen in the middle or a smaller display on the side.

Going Stealth. It used to be cool to see how much A/V equipment someone could squeeze into a room, as well as watch that technology at work. Now, homeowners are opting to have the technology work behind the scenes. After all, a bunch of blinking lights doesn’t really enhance the realism of a romance or an action scene. According to Brian Farley, vice president of Crescendo Designs, Ltd., an installation firm in Southampton, N.Y., the home theater experience is all about when the lights are off—which is 95 percent of the time the room is in use. “There’s no benefit in seeing the gear,” he says. “Most of these systems aren’t terribly attractive—even to a gear head.”

However, it’s not just black boxes like a Blu-ray player or receiver that can be hidden. Many people are opting for in-wall speakers and drop-down projection screens to help preserve the

room aesthetics. Some are even choosing to disguise a big-screen TV as a piece of art by using fabric, a frame, or just by rotating pretty pictures on the screen using a dedicated PC or the TV’s wallpaper feature.

The most important aspect to consider when hiding equipment, whether it’s in or out of the room, is how you’re going to control it. Remember that infrared-based components need line-of-sight to be controlled. Otherwise, you’ll need to add a sensor, blaster, or extender to make the system work. Consider opting for RF (radio frequency) or Wi-Fi-based controllers, such as your smartphone or tablet, which can tap into components from almost anywhere.

“The biggest trend is in the shape of the theater. Theaters are getting taller to accommodate the dispersion required to exploit the new surround-sound formats,” he says. “We are undergoing a para:¬digm shift in how movie soundtracks are engineered and played back. Theaters that had seven speak:¬ers and a subwoofer or two used to be the pinnacle. We now have upwards of 34 speaker/subwoofer combinations. Ultimately, the size of the room dictates the number of speakers it will support.”

Frank Karp, COO of New York’s Audio Video Systems, Inc., agrees. “We went through a period of time where we were looking at more multi-use rooms than dedicated theaters,” he says. “Now we’re starting to see dedicated theaters come back into fashion.” Karp says that multi-purpose rooms haven’t exactly gone away either, and in some cases, clients will install both a dedicated home theater and a multi-purpose theater room (see below).

Multi-purpose Rooms. Not everyone has the want, need, or know-how to build a big, dedicated home theater. This doesn’t mean that you should go without. Multipurpose media rooms are still en vogue. Often, these rooms are disguised as casual viewing spaces, where you can entertain friends or sit on a comfy couch to watch the nightly news. Then, when it’s time to watch a movie, you can crank up the in-wall speakers and trigger a screen that slowly descends from a hiding spot in the ceiling.

“Home theaters used solely for watching movies are the anomaly now. People are using these spaces more as multipurpose rooms,” says Sheri Griffin, president of the Home Theater Design Group, a residential technology firm in Addison, Texas. She says that in her experience, homeowners are opt:¬ing for media spaces that can include a bar or gaming area, making the room more of a social space.

“We work in some very high-end homes that still have the dedicated media room, but I think what happened is a lot of people built stand-alone media rooms and just found that they weren’t using them as much as they thought they would,” Griffin says. “What they’re using them for now is really to bring the family back together. Media is still very much the centerpiece in homes for sure. It’s just being utilized differently.”

Secondary Theaters. If you don’t have the option for a king-size room that can accommodate a bevy of speakers and a larger-than-life screen, why not just have two entertainment spaces? Having a second theater in one home is not as far-fetched as it used to be. After all, once you get used to having a home theater room, going to a tiny screen in the bedroom or a playroom seems so unevent:¬ful and kind of lame. However, with a few additional pieces of equipment, these are perfect spots for a secondary theater. And you don’t have to necessarily call in a professional to make this room happen. (Although, it’s certainly not a bad idea.) A second home theater can be as simple as a big-screen TV and a surround-sound system.

It’s important to note that if you want a smaller system, you may be able to feed off of the main home theater’s cable/satellite box, as well as the A/V receiver. Several receivers feature an option for a second zone, which can put two channels of audio into a different area of the house. If you’re thinking of putting a pair of speakers or a few in-walls into a bedroom space with a big screen, this could be a great opportunity to utilize the equipment that’s already in primary viewing area.

Looking to create an impressive home theater system? In the Complete Guide to Home Theaters: you’ll receive tips and advice on how to turn any room into a sensational home theater.