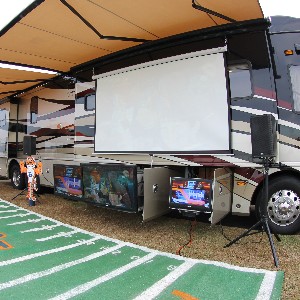 When it comes to sports, no fans are as rabid as football fans. Some draft fantasy teams, some stand out in brutally cold temperatures, and some paint their faces. Some of those super-fans also install crazy theme theaters in order to pay homage to the pigskin.

Of course, we’ve seen a lot of different sports-inspired theme theaters over the years. However, most of them seem revolve around the sport of: football.

With football season currently: in full swing, we thought it would be a great time: to take a peek at some of our favorite football-inspired theme theaters. Check out the five gridiron geeks: featured below.

Sizzling Seahawks Room
This Seahawks fan is definitely in the zone every Sunday—as well as in this room. It’s not technically a home theater. However, this decked-out den doubles as a media room and could even: provide a little boost for games featuring the: Legion of Boom. Besides the big-screen TV, the room has Seahawks-themed decor and a mural to make you feel like you’re right on the sidelines. Created by Polygon Homes in West Seattle, Washington, the location is just minutes from plenty of mutual fans in the downtown area.

Gators Guru
This Palm Beach County-based super-fan has created a Gators shrine inside his garage. The room features the University of Florida’s bold school colors, blue and orange, as well as a ton of autographed balls, jerseys, trophies, and much more. However, the real all-star here is the AV system. Audio Advisors and Acoustic Innovations worked together to install three Sharp LED displays, Sharp’s XVZ-20000 1080p DLP projector, a 110-inch screen from Stewart Filmscreen, and 7.2-channel surround sound. Everything is tied into the theme, as well as a Crestron TPMC-8X touchpanel, which can also highlight some of the memorabilia via Lutron lighting.

Ravens vs. Redskins
She loves the Ravens. He’s all about the Redskins. That said, it’s hard to choose sides when this room looks so good from every angle. Ryan and Jessica Donaldson won this basement remodel from the DIY Network TV show, Man Caves. As part of the project, Premiere Audio/Video Services was called in to install the room’s seven screens. That lineup includes one 52-inch Sanyo LCD, four 27-inch Toshiba flat screens, a flat panel above the bar area, and a 100-inch motorized Draper screen—all of which are viewable from the pictured leather seats, thanks to a turntable custom-built by Complete Hydraulic Service & Sales, Inc. Other features include a ceiling-mounted Sharp projector, an RTI T2-Cs+ remote, seven DirecTV receivers, and a Bose 3-2-1 audio system.

Tennessee Tailgate
These Titans fans certainly have something to cheer about. Donny Hackett has created a comfortable Titans-themed theater that really gives off an outdoor vibe. The room includes plush two-level seating, a starry fiber-optic ceiling, a crowd mural, football helmet sconces, framed jerseys, and a giant helmet to house AV equipment and double as a coffee table. Of course, the main event comes courtesy of a drop-down projector and a theater screen, which is embedded inside a replica of a giant goal post.

The Ultimate Tailgate
There are certain people that you just really want to tailgate with. Well, you can blow all of them off because this guy has the ultimate party space—and it’s mobile! While we don’t typically show off electronic homes you can drive to and from the game, this American Eagle 45H coach bus is quite the Electronic House on wheels. Inside the vehicle, Carroll Custom Designs installed a Control4 system that can pull down a 122-inch screen, as well as a 4,000-lumen projector, satellite receivers, two 1,000-watt speakers, and a Blu-ray player. And if you don’t feel like watching something while under the stars, the inside has additional 52-, 42-, and 30-inch TVs.