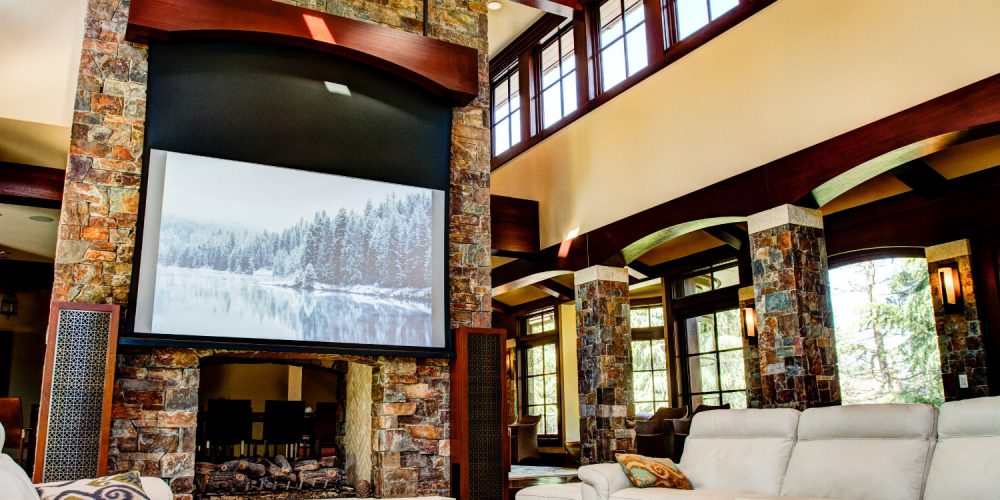 Building a dedicated home theater offers technology enthusiasts a chance to flex their high-tech muscles, and the homeowner of this 12,000-square-foot house took full advantage of the opportunity. “If there are special events, like you want to watch like the Super Bowl, movies that are still only in the theaters, or the premiere of Game of Thrones, it would be nice to have a venue, where you can have a dozen or so friends over and watch something together,” says the homeowner.

The space planned for the grand home theater is located in the great room, which boasts massive glass walls (without shades), a 25-foot-high ceiling and a floor-to-ceiling slab stone fireplace. The homeowner could envision how the room would function as a killer entertainment space, but needed help making it a reality. He called Brandon Smith Audio Design, of Scotts Valley, Calif., to handle the home theater design and installation of the gear.

“He wanted it to be a big, open space, where you could watch TV, sit on the couch, relax, and feel like he was more in a home environment rather than in a theater environment,” says Smith, who was recommended to the client by Heather Harrington, the interior designer involved on the project. “It was a really interesting job because I worked pretty closely with the client—because he is so technical.”

The centerpiece of this $500,000-plus system is a Digital Projection INSIGHT 4K LASER projector. This model can deliver a lamp-free 4096 x 2160 resolution, 4K 3D capabilities, and 12,000 ANSI lumens. “We looked at various projectors and he selected this one himself, which is pretty cool,” Smith says. “He really liked laser technology, and I couldn’t argue with that.”

“Getting one of the early units of that was awesome,” the homeowner continues. “And then figuring out how to distribute the various video feeds and how to connect it to everything—that’s where Brandon’s expertise came into play.”

Benefits of a 4K Laser Projector

Because it was not an option to put shades on the massive windows, the projector needed to provide a great viewing experience on the Screen Innovations 114-inch Slate projection screen even during the day. “We’re using that projector, number one, as a light cannon,” explains Smith. “But it also looks great. The color range on that projector is amazing.” The homeowner agrees, “It’s pretty incredible compared to say your standard fixed light source with DLP chips in front of it. And especially the reds and the greens on the lasers—they just pop. The color you get is just very beautiful, especially at night.”

Of course, having a laser projector also meant that the homeowner never has to worry about changing bulbs. “The physics of the situation is that lamp projectors get really, really hot, and that affects the lifetime. The last thing I want to do on a system like this is have to worry about changing bulbs every couple of years,” says the homeowner. “The laser had the advantage in terms of brightness, in terms of clarity, and in terms of longevity.”

The homeowner was a stickler for ensuring the cabinet for the projector, the housing for the screen, and the speakers would blend in with the home’s existing architectural elements. While intimately involved in all aspects of the home theater creation, he credits the success of the final room to the co-design and integration between Brandon Smith Audio Design, Heather Harrington Design, and cabinet maker, Wood Classics.

“Not only for how the screen looks in comparison to the rest of the house architecture, but the actual design of the cabinet so it could house the 4K projector, which by no means is a tiny thing—it is kind of giant—that looks like something that belongs in the house, looks very nice, is unobtrusive, and has all the air-handling, baffling, and sound-deadening so when that thing is going crazy you don’t really hear it in the room,” says the homeowner. “The integration of the speakers and the vibration isolation for these subwoofers—all of that was just pulled off very, very well.”

Cabinetry was also designed to house the speakers on either side of the fireplace. And when not in use, a 114-inch Screen Innovations Slate projection screen rolls up to hide behind an enclosure designed to complement the wooden arches found throughout the home.

To match the eye-popping image, Smith put together a high-caliber sound system, featuring Dolby Atmos decoding and Genelec in-ceiling speakers for a truly immersive experience. It even has a Datasat processor, which is something that’s typically reserved for large professional venues. “The way it works is wherever the speakers are, you go through the calibration and it takes the audio input—whether it’s Dolby Atmos or pick your favorite encoding technology—and renders it for the speakers as they’re configured. That to me was a big selling point,” the homeowner says. The part of the sound setup that the homeowner loves the most, though, is the subwoofers. “The subwoofers are probably the coolest feature ever. They literally will shake the couch in front of it,” he says.

A high-end A/V system deserves the best content, which is why Smith installed a Prima Cinema system. This $35,000 player can stream first-run movies that are still playing in theaters, ranging from $500 to $750 a pop, per viewing. This level of access to first-run content is usually reserved to cinemas. To ensure piracy is not a concern, to purchase a Prima Cinema requires an application process and background check.

Once installed, the Prima Cinema system is quite impressive. It features two power supplies and two network ports. There’s also a fingerprint reader to authorize film purchases, which are then routed through the equipment rack downstairs. Prima Cinema delivers full sound and full video, without any compression.

“If you unscrew the box, it will actually self-destruct,” says Smith. “So yeah, it’s quite a system.”

To accommodate the Prima Cinema system and other new components in the house, Smith also updated the home’s entire network infrastructure, as well as the multi-room audio system and equipment racks. Everything is tied into a Control4 remote for easy control throughout the house.

Better Than a Night Out

“I’d say it’s a superior experience to going to a theater,” the homeowner says. “I would argue that my furniture is more comfortable than what you find in a theater.” Of course, there’s always the ‘pause button’ you can’t get at the theater. “The sound is as good if not better, the projection is as good if not better. And when you’re watching a movie in there, it’s a really awesome experience, especially at night when the brightness and the clarity of the projector really comes through and shows its stuff, so to speak.”