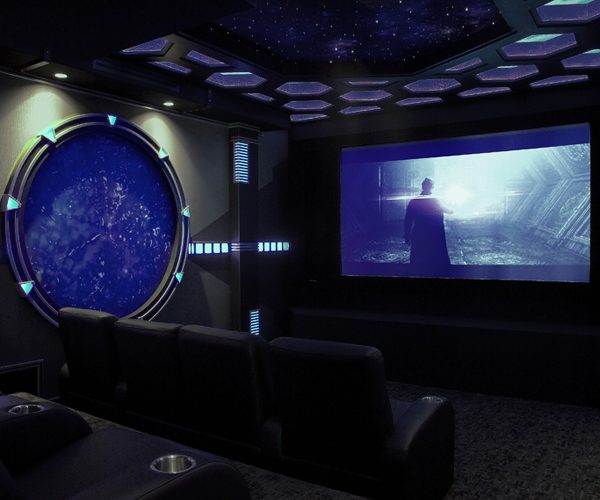 When it comes to generating home theater ideas and creating an overall plan, some people like to latch on to a theme. That theme could have to do with a favorite color or favorite style of decor. Of course, we here at Electronic House love the themes that go to the extreme!

Recently, we took a peek at “4 Rooms With Out-of-This-World Star Wars Home Theater Design” because that’s an insanely popular theme worthy of its own article. Now we are starting to think about other movie blockbusters—and more specifically, blockbuster-inspired home theaters. Need a few home theater ideas for your own upcoming project? Let’s take a peek at four of our favorite movie-themed rooms.

StarGate
Cinema Design Group of Boca Raton, FL, worked with CDH Electronics of Naples to make this sci-fi-inspired masterpiece. The seven-seat theater room features a Digital Projection Titan 330 DLP projector in the ceiling, a 179-inch Stewart Filmsceen curved screen at the front, and JBL Synthesis speakers in the walls. An Elan g! system controls everything in the room, as well as the electronics around: the rest of the house. Of course, it’s the design that’s most eye-catching, with that instantly recognizable portal. That accent was created by Cinema Design Group’s graphic designer, who printed the design on acoustic fabric with a special dye sublimation printer. Also worth nothing are the LED lights, which give the room a truly out-of-this world appearance.

Lord of the Rings
A home theater, my precious! Silver Screen & Sound, Inc. of Towson, MD, made someone’s Hobbit-filled dreams a reality with this room. It’s got tons of fantasy-themed home theater ideas throughout, with seating for seven, a huge screen, and Elan control via a wireless touchscreen. At the back of the room, there’s also a bar, as well as a door that leads to a massive equipment rack.

Titanic
You’d have to be king of the world to own this room, which was modeled after the ship from the movie Titanic. The one-of-a-kind creation was put together by Donny Hackett of Casa Cinema Design in Hendersonville, TN, along with Professional Audio Video Engineering (PAVE) out of Nashville. It features a CinemaScope installation with a Vidikron projector, a custom 120-inch screen, speakers embedded in the pillars and ceiling, and 1,230 fiber-optic lights to make the ceiling look like the night sky.

Pirates of the Caribbean
Yo ho, yo ho—this Pirates of the Caribbean-themed theater is impressive looking, but the fact that it’s one giant DIY project really blows us away. Paul and Emily Konold were first inspired by the Disneyland ride before it became a major film franchise. The lobby features wood planks and other pirate-themed booty, but the actual theater room is where most of the treasure is buried. It includes a Carver amp, Polk surround sound, a Panasonic projector, and a 125-inch 16:9 screen with a custom masking system to make the setup 2.35:1. At the back of the room, there’s also a pirate-themed bar with maps, gold and other accessories.