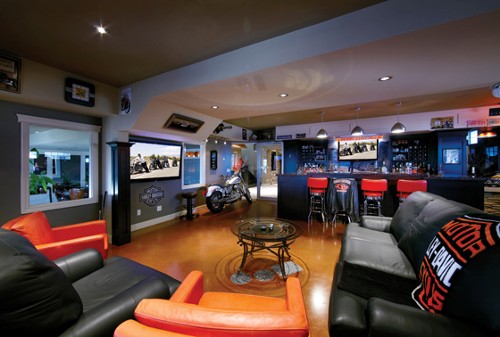 Some guys love power tools. Some love cars. Some are happy with a comfy chair, a remote and something to nosh on. Then there are those who need to go above and beyond—to create a space that most men only dream about. So what’s a man cave anyway?

Today, we call these spaces “man caves.” In these caves, though, the only things being fired up are amps, Blu-ray movies, video games and gigantic TVs (sometimes multiple ones). They are places where a guy can play with his toys without worrying about prying eyes or greasy kid fingerprints. In truth, we’re not big fans of the term “man cave” these days, but humor us for now. Gals can enjoy these fun media rooms as much as guys.

We know some man caves look more like Fight Club than much fun, so we’ve compiled 10 of our favorite high-tech hangouts, which include custom home theaters, ultimate garages, sports-fan media rooms and more.

No matter how dainty you are, it’s hard not to look manly standing next to a Harley-Davidson motorcycle. Maybe that’s why this homeowner parked his hog collection right in his home theater. The 40-by-25-foot basement houses both of his passions, allowing guests to snuggle up with a good movie and a good ride.

Other highlights include 32- and 46-inch LCDs and a 58-inch plasma, a Panasonic Blu-ray player, two high-def cable boxes, Elan in-ceiling speakers, an iPod dock, a bar and a poker area. The 46-inch TV is also hooked to a motorized remote. When it’s not in use, it gets sucked into the ceiling, so that everyone can enjoy the hand-painted mural behind the bar. That mount and everything else ties into an RTI T3-V handheld remote and Elan’s OleXL touchpanel.

Makes the Man:
– Plenty of Harleys
– Poker area
– One plasma and two LCDs in one field of vision

“As a stress reliever, I go to my car barn, crank the music as loud as I can and wax my cars,” he says. “It’s my escape.” If more than 6,000 watts aren’t enough to help him relax, he can always hit the road with one of those cars, which includes a 1969 Camaro Z28 and a 2008 Aston Martin DB9 convertible.

Makes the Man:
– Four subwoofers, including two the size of small ponies
– Muscle cars aplenty
– Needs its own 16,000-square-foot barn

In the Gator Zone

Want to know what football heaven looks like? Just ask this super-fan, who created a shrine to the University of Florida, right in his garage. The 13-by-22-foot room also has three 32-inch Sharp LCDs, a 110-inch Stewart Filmscreen fixed display, a Sharp 1080p DLP projector, 7.2-channel surround sound, a PlayStation 3, Lutron lighting and Crestron touchpanel control. It’s also got a full wet bar, an icemaker and two beverage centers.

However, it’s easy to miss all of that stuff and get caught up in the fanfare. Some of the highlights include signed jerseys; real championship rings; the game-worn cleats and gloves of Emmitt Smith, Jevon Kearse and Chris Leak; and a piece of the basketball court where the Gators won the 2007 NCAA crown. The crowning jewel, however, is a Dallas Cowboys helmet worn by Smith. The theater owner and football star struck up a friendship over a mutual interest in car electronics—as well as this homeowner’s car, which includes a mind-blowing 56-speaker system.

Makes the Man:
– Autographed memorabilia and game-worn gear
– Alligator fabric upholstery and alligator-texture carpeting
– Color palette that only a Gators fan could love

No need to sacrifice games on Sundays—or any other day, for that matter. This homeowner opted to enjoy all he could, on one wall. It has six 42-inch Panasonic flat-panel displays up there. Each one can tune into different games via its own DirecTV high-def satellite receiver. If something extra special comes on, the owner can have every TV display one giant image across all of the screens.

Each of those TVs features circuitry that can make any TV event even bigger, using four or all six TVs. Each TV has a 1.5-inch bezel, which does create a 3-inch gap in between each TV. It’s noticeable when you display the image across the entire spread, but to fix it would have been another $45,000. And really, who cares when a giant TV wall is to be had?

Instead of creating your typical game room, the owner of this 12,000-square-foot Dallas home wanted something that could display wild game. To keep things cool and lit properly, the house has 39 Crestron control interfaces—35 of which are wall-mounted.

Of course, it’s not just about the critters, unless they also enjoy catching up on Wild Kingdom. The media room features a 116-inch Stewart screen, a VX-2000d CW DLP projector, a 7.1-channel James loudspeaker system and Halcro processing and amplification. Throughout the rest of the house are another 10 Runco plasmas, a Samsung LCD and Monitor Audio Gold IW in-wall speakers, which feed most of the 16 audio zones.

There’s also guest quarters, complete with a full kitchen, dining room, living room and two bedrooms. Each of those bedrooms has its own 42-inch plasma, with a 50-incher designed to swivel between the guest dining and living areas.

Every guy needs a place to tinker. Dennis Hiffman and Tom Collins needed a 6,000-square-foot garage. Located on an amateur racing track at Joliet, IL’s Autobahn Country Club, the space houses all of the cars used in the duo’s GSD (for Greasy Side Down) racing team. It’s also got a 55-inch Fujitsu plasma, a Crestron Adagio system, SpeakerCraft speakers, and access to a ReQuest media server. However, the most impressive (and drool-worthy) feature is the Panasonic camera, which captures live racing action outside and routes it into the garage and other areas of the house.

Upstairs, there’s a 1,200-square-foot living space, complete with living room, kitchen and two bedrooms. It’s also got a 42-inch plasma HDTV with Artisan speakers attached to the sides, in-ceiling SpeakerCraft speakers and a Denon receiver. Everything is tied up into neat, sometimes grease-covered Crestron in-wall touchpanels and handheld remotes.

Makes the Man:
– Located on a racetrack
– Plenty of cars to pet
– Camera catches live racing action while you’re lounging inside

To plan for his adventures, this big game hunter watches a lot of DVDs. His research-worthy setup is THX-certified and includes a 65-inch Runco PlasmaWall XP-65DHD, Sony’s BDP-S550 Blu-ray player, Dish Network’s VIP 722 DVR, an Onkyo TX-NR906 THX Ultra II-certified AV receiver, and a full complement of Klipsch THX Ultra II speakers. The Philips TSU-9600 has everything under control. Other features include the Russound A-Bus system and Lutron Grafik Eye lighting to highlight all of his furry friends. Also, just to make sure his system never goes down, he’s got an APC battery backup.

It’s not just the animals that tie the room together, but the custom-made cabinetry. The cabinets may be just for show, but the animals had another purpose as well. “Having never worked on such a unique project such as a Safari Room, we were surprised to learn in the course of the project that all the animals shot during the safaris had the meat donated to the local tribes,” says Charisma installer Johann Peters.

When it comes to sci-fi and horror, the home theaters are a lot like the conventions—you don’t see too many women. Sure, there’s probably a Ripley or Princess Leia behind every great sci-fi geek, but we’re guessing they weren’t driving the ship when it came to the planning process.

Dr. David Winn did have his wife’s help (and her blessing) when it came to creating this hellish home theater. The self-proclaimed mad scientist created a monster mash of classic sci-fi and horror characters inside this room. At 25 by 35 feet, this close encounter includes monsters busting through the walls and ceiling, with some even spitting. That’s right, animatronics allow a lot of this devilish decor to move. The devout Christian may have a flair for the macabre, but there’s plenty to check out around the room, even if it is between the fingers covering your eyes. Winn also has a 144-inch screen, flanked by two smaller screens, a Sony PlayStation 3, three Xbox 360 units, an Optoma DLP HD2+ projector, and recessed starlights.

Robert Shaw’s Connecticut property doesn’t dominate when it comes to a specific sport. This multi-sport complex includes a bowling alley, a golf simulator, a game room, a gym, a basketball court, and of course, a home theater. The home theater has 20 seats (with room for 33), a Digital Projection projector, a 130-inch screen and a JBL Synthesis II audio system. All of the A/V, lighting and heating are under Crestron control, with in-ceiling and in-wall Bay Audio speakers scattered throughout the 12,000-square-foot post-and-beam-style barn.

Other highlights include an 8-zone audio system, automated lighting and heating, security cameras and separate lighting and audio for a Broadway-style stage inside the gym. Aside from the A/V, there’s also an ice cream bar, bunk beds, and seven bathrooms to satisfy Shaw’s 20 grandchildren.

Take One for the Team

It’s nice that this homeowner paid homage to his heritage, with a unique Hawaiian/Mediterranean fusion. However, black and purple furniture and jerseys of Ray Lewis and Ed Reed can only mean one thing: This guy is a frothing Baltimore Ravens fan.

To help calm this savage beast during Sunday games, there are eight video displays in one space. Four 40-inch Sony LCDs circle a 52-incher in the lounge area. By the bar, there are three more 32-inch Sony LCDs. In case you’re not into being social, there’s a 110-inch screen nearby to engulf all of your attention.

To cut down on the complexities of flipping from EPSN to ESPN2, each of the eight TVs can be controlled separately. The homeowner can also use one of many Crestron touchpanels to turn on all of the TVs to predefined choices with one button. Each TV also has its own HD satellite receiver and DVD player. For the off-season, there’s also a whole-house DVD player, which can feed video to any TV. Sound comes from four Niles MP6 in-ceiling speakers above the bar, with four more in the lounge area. Visitors can also fumble with the HVAC system as well as LiteTouch lighting controls.