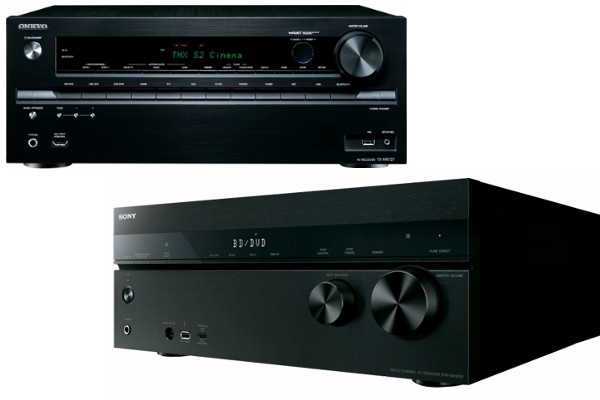 The AV receiver (also known as the AVR or home theater receiver) isn’t the prettiest piece of a home theater system, but it’s certainly the most important. It’s a magical place where all of the audio meets all of the video and sends music and soundtracks to your home theater speakers.

Sometimes, it has processing powers and other times it can connect to the web. In other words, it’s something that you really shouldn’t skimp on. This one heavy home theater component serves as the cornerstone, the hub and the “brains” behind any good setup. You want the best home theater receiver your budget can handle.

Home theater receivers combines a preamplifier, a tuner and an amplifier into one unit. With all of that going on inside, you should know that the best AV receivers have a mind-numbing amount of specs. When it comes down to it, you don’t really need to examine every single item on that detailed list — unless you want to, of course. (Have at it!) However, it’s not worth a panic attack. Here are a few simple things to keep in mind when shopping for a receiver:

Your Speaker Collection. Been collecting speakers since the ’70s? Don’t expect to connect all of them to your AV receiver. Most of today’s AVRs won’t support that kind of crazy setup, but there are options. Whether you want a 5.1 setup or want to go for 9.2, make sure that your receiver can handle the number of speakers and subwoofers you want populating your system. And know that if you’re on a budget, your selection may be limited.

4K Support. If you’re going to upgrade to a 4K Ultra HD TV or projector, you probably want to actually use it. Make sure that your receiver can support 4K content.

HDMI Inputs. How many HDMI inputs is enough? That can be a very personal answer. If you don’t have enough, an HDMI switcher will add in a few more ports, but that’s probably not a purchase you want to make right away. Make sure you have enough inputs (and outputs) for your current needs — and maybe even one or two extras for components you will inevitably buy in the near future.

Wireless Networking. Even if you don’t ever plan to stream one web radio station, having Bluetooth, AirPlay or Wi-Fi built in is probably something you’ll want at some point. It allows you to snag stored content from networked NAS devices, as well as stream web radio and subscription services like Pandora, Rhapsody and Spotify, all without the need for other boxes or your smartphone. And speaking of which: There will be times when you won’t feel like hoarding, which makes the option to cast audio from a smartphone or tablet directly to a system quite nice.

Other Rooms. Do you want to rock a second space in your home? The best home theater receivers support multi-zone and multi-source audio. For instance, a lot of 7.1 receivers can be set up to deliver 5.1 in a main area, saving two channels for the back deck (or wherever else you want music). Just as long as you aren’t expecting a second zone that has a full 5.1 complement, you should be able to find something suitable at an affordable price.

Of course, budget is a main concern as well. Thankfully, there are a lot of affordable AV receivers that can deliver great surround sound and all of the above bells and whistles. Yes, you shouldn’t skimp, but it doesn’t mean that you have to spend a bundle, either.

Take a peek at these Top Home Theater Receivers for Under $1,000:

Denon AVR-3100W Home Theater Receiver
This 7.2-channel AVR is part of the company’s IN-Command Series of home theater receivers, the AVR-3100W was designed with the audiophile in mind. It has decoders for all of today’s typical audio formats, such as Dolby TrueHD and DTS-HD Master Audio, but can also tackle DTS Neo:X and Dolby Pro Logic IIz. Even more impressive is that it can crank 105 watts per channel with Audyssey’s Gold Suite of DSP audio algorithms, which includes the MultEQ XT automatic room acoustic measurement and correction system, as well as Audyssey Dynamic EQ, Audyssey Dynamic Volume and Dynamic Surround Expansion. Other features include an HDMI matrix video output and an HDMI audio input for a second zone. It’s also “Crestron Connected,” which means that this model has the company’s seal of approval and can be easily integrated into any Crestron control system.

Onkyo TX-NR737 Home Theater Receiver
As part of Onkyo’s new “Emotion Delivered” concept, this 7.2-channel receiver is designed to move the listener via the company’s audio expertise and a whole lot of high current. The latter is an important part of the initiative, but the AVR’s THX Select2 Plus certification certainly doesn’t hurt, either. Boasting up to 125 watts per channel (6 ohms, 1kHz, 0.7%, 2 channels driven, FTC), the TX-NR737 has two HDMI outputs and seven HDMI inputs—one of which includes MHL support. Some of those same inputs can deliver Ultra HD video at 60 frames per second and HDCP 2.2 compatibility. Other features include Wide Range Amplifier Technology (WRAT), Qdeo upscaling, Three-Stage Inverted Darlington Circuitry amplification, dual Digital Signal Processing (DSP) engines, 192 kHz/24-bit Burr-Brown D/A conversion, the Advanced Music Optimizer DSP, and InstaPrevue technology. Also worth mentioning is that this receiver has plenty of networking options, via built-in Wi-Fi, Bluetooth and DLNA.

Pioneer Elite VSX-80 Home Theater Receiver
Pioneer announced that this model would come with support for Roku’s Streaming Stick. That basically means that this 7.2-channel unit (90 watts per channel/8ohms) has an MHL-enhanced HDMI port on the back. Of course, you could opt for the HDMI version of the Stick and plug it into any of this AVR’s seven HDMI ports. Even more interesting is that the VSX-80 is part of Pioneer’s “Elite” line, so it has RS-232 and IP control, as well as the option for multi-zone and multi-source use. Other perks include the HDMI 2.0 spec on all of those inputs, with 4K 60p Ultra HD upscaling and 4K60p 4:4:4 color support for use with the latest 4K TVs. Because it’s an Elite model, it also has the ESS SABRE Premier Audio DAC, MCACC technology with a subwoofer EQ, support for high-resolution music (96kHz 24-bit), and compatibility with third-party control systems such as Crestron and Control4. And just in case you need another way to control it, the VSX-80 is compatible with Pioneer’s iControlAV5 app, which has an AV Scaling feature to override your TV’s native setting for a few easy tweaks on the fly.

Yamaha RX-V777BT Home Theater Receiver
As part of the 2014 RX-V Series, the 7.2-channel RX-V777BT has built-in Wi-Fi and the option to stream via Bluetooth. Promising up to 110 watts per channel (8 ohms, 1 kHz, 0.9% THD, 2-ch driven), this top-of-the-line model even has YPAO R.S.C. with multipoint measurement calibration options and an HDMI Zone B for putting additional HDMI AV in another room. Other features include six HDMI inputs (with one of those offering MHL), two outputs with 4K 50/60p video upscaling, SiriusXM and Rhapsody streaming (with a paid subscription), HTC Connect, and YPAO Volume audio technology. Also, just in case you’re having problems with speaker placement, this model has Yamaha’s new Virtual CINEMA FRONT technology. This option means that you can place five speakers at the front of the listening area, while still getting the surround sound effect.

Harman Kardon AVR 3700 Home Theater Receiver
Harman has recently given this model a boost, giving it 4K video pass-through and upscaling
features. However, it offers plenty of other perks including AirPlay, DLNA, Wi-Fi, and eight HDMI inputs. Boasting 125 watts for each of the seven channels, the AVR 3700 has eight HDMI inputs, an extra LFE channel, and options for a second zone—complete with a separate remote for that separate area. Other features include 3D and Audio Return Channel, support for Harman’s control app, and EzSet/EQ calibration.

Marantz SR5009 Home Theater Receiver
Unfortunately, you can’t get a Marantz receiver with the Crestron Connected seal of approval for under $1,000. What you can get, however, is the SR5008. This 7.2-channel AVR packs in 4K support and upscaling, seven HDMI inputs, a front-panel USB port, and decoders for Dolby TrueHD, DTS-HD Master Audio and Dolby Pro Logic IIz. It’s also got plenty of connectivity options via AirPlay and built-in access to Pandora, Spotify and SiriusXM. Rated for 100 watts per channel (into 8 ohms), the SR5008 also has Marantz’s own HDAM (Hyper Dynamic Amplifier Module), support for a second zone, and a slew of Audyssey goodies such as MultEQ XT, Dynamic Volume and Dynamic EQ.

NAD T 758
Based on NAD’s T 757, this update has a Modular Design Construction with digital audio and video circuits on replaceable modules. This is actually a really unique little perk, designed to ensure that this AVR will be part of your setup for years to come. Need a new feature? Just swap out the circuit board! Today, the T 758 has support for 3D, Dolby TrueHD and DTS Master Audio, as well as the EARS surround mode, Audio Return Channel (ARC) and Consumer Electronic Control (CEC). With up 110 watts for each of its seven channels, the T 758 also has analog-to-HDMI video upconversion (up to 480p), Audyssey auto speaker calibration, four HDMI inputs, and five presets for customizing sources, speakers, and settings.

Sherwood R-807 Home Theater Receiver
This entry isn’t brand new, so it doesn’t have support for 4K content. That said, the 7.1-channel receiver is still a solid performer with plenty of perks. It features 100 watts per channel (20Hz~20kHz, 6Ã¢â€ž:¦, THD 1%/Only Channel Driven), five HDMI inputs with ARC, and options for audio in a second zone. It also produces some great sound, thanks to a 192kHz/24bit DAC and support for HD and legacy audio decoding. It also offers several networking options, including access to web radio and control via Sherwood’s app for iOS and Android devices. It even has Wi-Fi Direct built in, which allows users to send content directly to the receiver from any smartphone.

Sony STR-DN1050 Home Theater Receiver
The last entry on our list is bursting with AV goodies, including the ability to crank out high-resolution audio formats, such as FLAC and DSD. For your streaming needs, this 7.2-channel receiver can tap into Music Unlimited, Pandora, Spotify and TuneIn, but also has the option to stream from smartphones, tablets and other devices via the built-in Wi-Fi, AirPlay and Bluetooth with Near Field Communication (NFC). Promising 165 watts per channel, it also features 4K upscaling and pass-through, six HDMI inputs (two of which have MHL support), three HDMI outputs, and a USB input. It can also power a second zone using one of those outputs, as well as IR repeaters and both amplified and line-level audio connectivity.