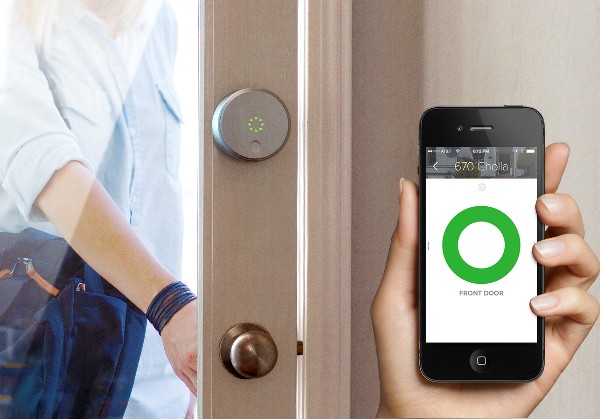 With home security as the most powerful driver in the adoption of smart home systems, it’s no wonder that the world of smart locks is growing.

First off, of course, is the question—what is a smart lock? A smart lock isn’t just a keyless door lock. In fact they all (well, most) accept keys (though you might eventually stop using your keys). Some smart locks include numeric keypads so you can unlock your door by punching in an access code. All smart locks operate with an app on Apple or Android smart phones or both. They communicate wirelessly with your phone, via Bluetooth or Wifi and/or with your smart home system via one of the common wireless mesh network standards like Z-Wave.

A smart phone replaces your traditional key, but the phone isn’t actually the key, it simply supplies the virtual key to the lock. Most smart locks allow you to create and assign multiple virtual keys, and often you can assign them temporarily. The benefit of having multiple virtual keys is that you can easily track who is locking and unlocking the door as the app will show, for instance, “Kim unlocked the door at 8pm” or something like that. If you have a guest arriving, you can assign that person a virtual key or remotely open the door yourself. Some locks allow virtual keys to expire at a set time in case you want to limit a guest’s access to an hour or a weekend.

If you throw someone out of the house, you can change all the virtual keys, without changing the locks (though the physical keys will still work).

A smart lock that can be integrated with a whole home security system or smart home system is additionally convenient because you can program rules or activities that include the lock. For instance, a “goodnight” scene that shuts off all the house lights and arms the security system can also make sure the front door is secure.

If you’re interested in installing a smart lock, check out these:

The Kevo, when it’s just hanging there on your door, looks the least high-tech of all the smart locks here, and that’s a good thing, because it doesn’t call attention to itself. When you’re using it, a cool glowing ring lights up. Kevo communicates with your phone (or an optional key fob if you don’t have a smart phone) via Bluetooth. You don’t even have to pull out your phone to open the door. When the lock senses you in front of it, you just have to tap the Kevo with your finger to unlock. You can assign unlimited virtual ekeys, even temporary ones. The Kevo can even tell if you’re inside or outside the house. Available on Amazon:$220

The Schlage Sense is the first smart lock designed to work with Apple HomeKit technology, and includes the ability to use Siri to lock and unlock your door with your voice. You can assign and mange up to 30 virtual keys (Schlage calls them codes) at the same time. The Schlage Sense lock will be available in two styles, Camelot and Century, in a variety of finishes, including Matte Black, Satin Nickel and Aged Bronze to complement each home’s look. (price not available at this time)

The Goji Smart Lock is a lock and a camera. If you want to know who’s at the door, the Goji automatically takes a picture and sends it to your mobile phone. The device connects to your home WiFi network, and also communicates with your phone via Bluetooth. It comes with two real keys, but you can assign virtual keys to your family and guests. Bluetooth key fobs are also available for members of the family without smart phones. $279

The Yale Real Living Key Free Touchscreen T1L Deadbolt eliminates the cylinder which makes installation easier. It also promises a little extra security, since they can’t be picked or bumped. Once installed in the door, the locks can be paired with a Z-Wave smart home system. The T1L features a durable black acrylic capacitive touchscreen that’s illuminated, so you can see it in the dark if you want to use the keypad instead of your phone to open the door. Available on Amazon: $240

The August Smart Lock can maintain a constant internet connection by combining with the August Connect, a small device that plugs into a power outlet in your house and connects to your wireless network. This allows you to reach the lock remotely if you need to unlock or lock the door while you’re way. It also communicates to your smart phone via Bluetooth, so you don’t need an internet connection for the lock to operate. The August lock is part of the “Works with Nest” family, so the Nest Thermostat can be programmed to change temperature settings based on when you lock and unlock the door. $250 for the lock. $50 for the Connect WiFi adapter.