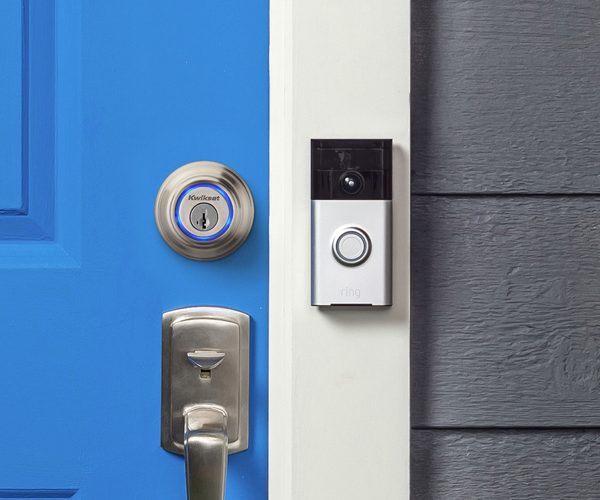 Recently, we were talking up “3 Doorbell Home Security Cameras to Secure Your Entryway.” Having one of these systems can be your first line of defense against unknown or unwelcomed guests. Now, one of those intercom/doorbell options is looking to get cozy with other parts of the smart home.

Ring just announced plans to partner up with the Kwikset Kevo smart lock. The Kevo is a popular smart lock that’s powered by UniKey technology.: It’s a: Bluetooth-enabled solution that can turn the smartphone into an electronic key (eKey). If you want to access that eKey from the office, a vacation home, or another remote location, you’ll need to opt for the Kevo Plus upgrade, which is a one-time fee of $69.99.

Integrating the doorbell with a smart lock makes for a pretty high-tech doorway. However, Ring doesn’t want to stop there. The company just launched Ring Plus, a program that will allow customers to connect several smart home devices to the Ring Video Doorbell.

To start, Ring has announced partnerships with several smart lock companies, including Lockstate and Kisi. The company will also work with Wink—who seems to keep adding partners, despite filing for bankruptcy just last month.

By tying the Ring system into smart lock solutions, users can see and speak to whoever approaches, as well as lock doors and turn on lights. Everything is accessible via the free Ring app for iOS and Android devices.

“Ring’s company mission is to reduce crime in communities through affordable, smart security solutions. In fact, Ring has already prevented burglaries, helped police identify and apprehend suspects, and caught misbehaving USPS workers and package thieves,” said the company’s announcement. “Now, by connecting the Ring Video Doorbell to additional smart devices, users can do even more to protect their homes.”

The Ring Video Doorbell is selling now for $199. The Kwikset Kevo smart lock is also available now, priced at $199.