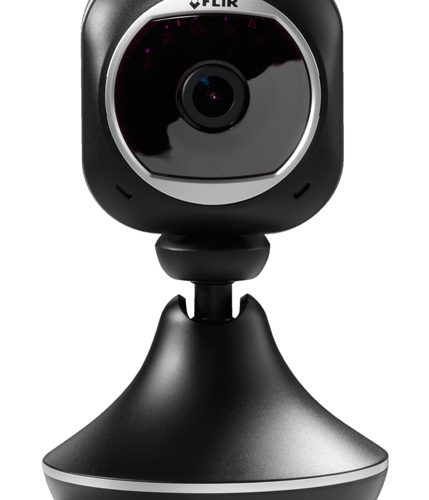 With the recent introduction of the Nest Cam, now would be a great time to remind everyone that there are other DIY home security cameras out there. And believe it or not, a lot of them are really good.

Of course, in this day and age, it’s hard to compete in this area of the security market. After all, there’s currently a crazy amount of competition and some of those cameras: have: specific perks to make them stand out—or at least, they’d better have them. For instance, the: $199 Nest Cam does include integration with both the Nest thermostat and the Nest Protect Smoke + Carbon Monoxide Detector. However, the people at Flir are making a hearty push for your security dollars: with the introduction of the FX Wireless HD Video Monitoring system.

What It Promises
This DIY home security camera has quite a few cool features. It boasts 1080p on-board recording (to the included 8GB microSD card), 720p streaming, WiFi support up to 500 feet, a 160-degree lens, two-way audio, and the option for HDR video and still images. It even offers night vision up to 33 feet, as well as the option to go completely wireless. That basically means that you don’t have to put the camera next to an outlet, because it has a built-in battery. It also means you can take it out of the house for GoPro-style hijnks. However, it’s important to note that the battery is only good for up to four hours of use.

Another nifty perk is that Flir is making some interesting accessories for the FX camera. That lineup includes a waterproof sport case ($69.99), weatherproof housing ($79.99) for outdoor use, and even a dash mount ($49.99) for the aforementioned portable adventures.

However, the camera’s most: interesting feature is something called RapidRecap, which can condense the events of the day into a bite-sized highlights reel. So instead of: sitting through hours of boring footage, the system can pack events from a predetermined period (up to 12 hours) into a short video clip.

What It Delivers
Inside the box, there is the Flir FX camera, a 10-foot USB cable, an indoor stand, wall-mounting hardware, am 8GB microSD card, and an international USB power adapter. There’s also a quick start guide, which recommends that you charge the camera for 30 minutes before beginning any type of setup process. So, that’s what I did.

While you wait, you can download the Flir FX app, which is available for iOS and Android devices. Once the camera is ready to roll, the light at the top will turn green. Of course, you don’t have to rely purely on battery power. As mentioned, the Flir FX camera can do up to four hours when it’s untethered. If you don’t mind having a wire hanging (or can conceal it), it can certainly be a permanent fixture for that crowded electrical outlet.

The free Flir FX app will easily walk new and existing users through the entire setup process. There’s even a little “getting started” video on the first page of the app, in case you need extra help. New users will need to supply an email address and a password. The second screen will prompt you to set up a camera. Choose between indoor and outdoor, and then you’ll be prompted to scan the QR code on the bottom of the camera. Next, I was instructed to go to my iPhone’s WiFi settings and connect to the camera like it was a stand-alone network. Finally, I had to name the camera, provide a password, and enter my WiFi network’s password.

Once the first camera is added, you’ll be asked to add another—and another. The app can support a total of 16 FX cameras (and you can actually view up to four on one tablet screen).

After the initial setup and a quickie software update, I was viewing live video. Besides charging the camera, the entire easy process was just a few minutes.

The camera itself is small, but sports a few interesting elements. The left side has a power button and WiFi button, in case you want to manually toggle between the cloud and the Direct/Hotspot mode (for viewing content from the SD card without a web connection). The top has a Record button. The right side features a microSD slot and a microUSB port for power. If that port isn’t convenient, there’s another one on the stand. (Flir says to only use one port at a time.) The front of the camera is where you’ll spot the lens, the microphone, and the speaker. Finally, there are LEDs on the back of the camera to identify the Cloud mode and the Direct/Hotspot mode. Also worth mentioning are a few things that aren’t easily seen, such as the night vision LED and the temperature/humidity sensor. The latter is interesting, since not only will the app deliver weather information about your room, but you can even set the camera to notify you in case of atmospheric changes.

Once the camera is placed, all of the action goes down in the app. At first glance, I noticed the nice wide viewing angle, as well as local weather and humidity. (Those sensors appeared to be fairly: accurate, by the way, based on data from the weather station on my roof.) In the iOS app, there are also are buttons labeled Actions and Recording. Actions provides options for the RapidRecap feature, the two-way intercom, the ability to email a snapshot, and Settings.

Settings would be a good thing to tweak, since wireless security cameras can deliver a lot of false alerts. The Flir FX may actually: deliver more than the average wireless camera, too. Whenever I made a phone call, talked to someone in the house, or even turned on the fan, I got an audio alert. There were plenty of motion alerts and temperature alerts as well.

The view out my front window was pretty good looking. Colors were bright during daylight hours and the night vision gave a decent view of my living room in complete darkness. On my iPhone 4, I thought the action appeared to be slow. Like, it looked like someone was pushing the cars down my street—it was that slow. Once I switched over to my iPad, the images were better and the action was much smoother. This was a running theme with my iOS devices, so if you have an older model of iPhone, you may be really annoyed. For instance, the two-way intercom didn’t work on my iPhone at all, but: my: dog definitely got my messages from the: iPad.

Likes
My absolute favorite part of the Flir FX is: the RapidRecap feature. Wisely so, this feature is prominently displayed inside the app. It has a drag-and-drop interface that allows you to create a little highlights reel around a set period of time, which ranges from six to 12 hours (see below). And, it worked like a charm. It’s really cool to see who is coming and going, in a condensed format. You’ll also know when that movement is happening, since every car, truck and person is time-stamped.

Another great thing about the Flir FX is that it offer a few freebies—to a point. For instance, you can record to a microSD card ranging from 8 to 64GB absolutely free (not counting the price to upgrade the included 8GB card). However, Flir also: provides up to two days of cloud storage absolutely free. If that’s not enough, there are two different subscription plans, which I’ll get to in a minute.

Dislikes
The RapidRecap feature is absolutely the best thing about this camera. Now, here comes the rub: If: you’re opting for the freebie FLIR Cloud Basic service, you will only get three RapidRecaps per month. This is a bit of a downer, since it’s one of the best parts about the FX camera—but what do you want for nothing? Also, when creating recaps, you are limited a six-hour window from the previous 24 hours’ worth of recorded events. It should also be mentioned that the basic service will only store 48 hours of RapidRecaps and recorded events overall. If you captured raccoons or prowlers or Spider-Man, you’d better save it to local storage before it’s gone.

If you want unlimited RapidRecap videos, you can opt for FLIR Cloud Plus, which provides an eight-hour recap window and seven days of storage for $9.95 per month. The FLIR Cloud Premium option bumps the window up to 12 hours, with 30 days’ worth of storage. So depending on your needs, you may want to pay beyond the camera’s $199 purchase price.

It’s also very important to mention that the FX operates on a delay. The action you are seeing in the app is maybe a minute or so behind what’s actually happening. That said, it didn’t seem to stop the notifications from coming. (They came a lot!)

That’s another thing: No matter how much I tweaked the Settings, the notifications kept coming.: It was sort of: annoying, but eventually I learned to ignore them—which sort: defeats the purpose of notifications. After all, what if: something actually happens?

And besides event notifications, the app would: regularly tell me that the “Camera is Currently Offline.” Rebooting the app seemed to solve the problem almost every single time. Once in a while, I would turn the camera off and back on. However, I don’t want to do those things. It was a bit annoying, especially: since this is not a junkie, inexpensive camera.

My last gripe is that the Flir FX offers no type of integration with other smart devices—but you know what? Not all of them do. It does offer plenty of other perks, including: the option to go mobile. I am not sure why people would want to do that when GoPro is readily available in a variety of price ranges. However, it’s an option. That RapidRecap is really the standout here, though. It would be nice to get more of those for free, but frankly, if they could just fix: a few: of those little app bugs, that perk alone would make the Flir FX DIY home security camera worthy of its $199 purchase price.